A field experiment was carried out during summer, 2019 on sandy clay loam soils of wet land farm of S. V. Agricultural College, Tirupati, Acharya N.G. Ranga Agricultural University. The experiment was laid out in randomized block design with factorial concept comprising of four sesame varieties (YLM-66, YLM-17, YLM-11 and Madhavi) and four sulphur levels (0, 20, 40 and 60 kg ha-1) replicated thrice. The results revealed that sesame variety YLM-66 was more responsive to the sulphur application than other varieties. YLM-66 recorded higher growth parameters and yield attributes, seed yield and stalk yield which were however comparable with YLM-17 and both varieties were significantly superior over other varieties. Sesame varieties responded significantly to the progressive increase in sulphur levels from 0 to 60 kg ha-1. The application of 60 kg S ha-1 was recorded significantly higher growth, yield attributing characters, yield and quality parameters which was statistically similar with 40 kg S ha-1 and both levels were significantly superior over other sulphur levels.

Oilseeds are the important constituent in human dietary system because they are the main source of fat and protein, particularly for vegetarians. India is one of the largest vegetable oil economies in the world next to USA, China, Brazil and Argentina. India is facing acute shortage of edible oil mainly because of heavy demand due to population pressure, raised standards of living and increasing requirement from oil consuming industries. This demand is partly met from soybean, sunflower and palm oil. Under such situations, it needs to build up selfsufficiency in oil production to meet the increasing demand of the consumers and industries. Cultivation of sesame crop is gaining momentum to bridge the gap of oilseed production in the country.

Sesame is an important edible oilseed crop in India next to groundnut and rapeseed-mustard. It is one of the oldest known oilseed crop that was domesticated nearly 3000 years ago and commonly known as gingelly or til. India is the third largest producer of sesame in the world after Myanmar and China. In India, sesame occupies about 16.67 lakh hectares area with an annual production of 7.47 lakh tonnes and productivity of 448 kg ha-1. In Andhra Pradesh, it is grown over an area of 64,000 hectares with a production of 17,000 tonnes and productivity of about 266 kg ha-1 (www.indiastat.com, 2016 – 2017). Among the oil seed crops, sesame has the highest oil content of 46 to 52 per cent with 25 per cent protein and sesame oil contains important antioxidants (sesamol and sesamolin) which prevent the rancidity. It is called as “Queen of oilseeds”. Many unsaturated fatty acids are present in sesame seeds such as linoleic and oleic acids that are mainly responsible for oil quality. Because of excellent quality characters, it is also sometimes referred to as “poor man’s substitute for ghee’.

At present national average yield of sesame is 448 kg ha-1, which needs to be at least 1.2 to 1.5 tonnes by 2025 as reported by Hegde (2006). However, the gap between the potential achievable yield and the average yield of sesame is wide. Therefore, it requires a dedicated and an integrated agronomic effort to find appropriate strategies that would be beneficial to all the stake holders. The main reason for low productivity of sesame is its cultivation in marginal and sub marginal lands under poor management and input starved rainfed conditions.

The varieties grown by majority of farmers are indeterminate types with shattering capsules. They have restricted adaptability and are thermo-photo sensitive. Thus, there is a need for identifying varieties having wider adaptability, which can be grown under wider areas and seasons.

Oilseed crops require more amount of sulphur for their growth compared with cereals. Sulphur is considered as the fourth major plant nutrient after nitrogen, phosphorus and potassium. High yield and quality of oilseed crops are possible only when crops have access to the optimum amount of sulphur. Sulphur plays a key role in the plant physiological processes, essential for the synthesis of essential oils, chlorophyll formation and it also increases cold and drought hardiness of crops especially for oilseed crops. It also increases the availability of other nutrients such as nitrogen, phosphorus and potassium. Use of high analysis sulphur free fertilizers, higher sulphur removal by the crops under intensive cultivation and neglect of sulphur replenishment contributed to widespread sulphur deficiencies in arable soils. Sulphur has become one of the major limiting nutrients for oilseeds in recent years due to its widespread deficiency. Hence this study was attempted to study the importance of varieties and sulphur in realizing the better growth, yield and quality of sesame crop.

The field experiment was laid out in Randomized Block Design (RBD) with factorial concept. There were four varieties (YLM-66, YLM-17, YLM-11 and Madhavi) and four levels of sulphur (0, 20, 40 and 60 kg S ha-1) consisting of sixteen treatments and replicated thrice. Sulphur was applied as per the treatments while nitrogen, phosphorus and potassium were applied as common to all the treatments.

The plant height was found to be higher with sulphur at 60 kg ha-1 while, control treatment (S1) recorded the lower plant height. This increase in plant height might be due to interaction of sulphur with nitrogen which enhanced the vegetative growth of the plant. The above results were in conformity with the findings of Singh et al. (2000).

Maximum LAI was registered with YLM-66 (1.34)which was significantly superior over other varieties. The next best variety was YLM-17.Minimum LAI was registered with Madhavi (V4). This might be due to varietal difference in producing more number of leaves and total leaf area plant-1. The above results were in conformity with the findings of Jat et al. (2017). The higher LAI was noticed with sulphur at 60 kg ha-1 which was statistically on par with sulphur at 40 kg ha-1. The lower LAI was noticed with control. Increase in LAI at higher levels of sulphur might be accounted for more activities of meristematic tissues of plant, increasing number and size of cell, which ultimately increased total photosynthetic surface area and LAI of plants. These results were in close conformity with those of Saren et al. (2004) and Pavani et al. (2013). 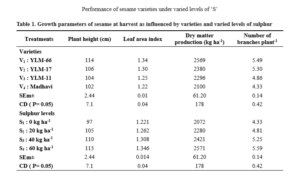 Among the varieties, the higher number of branches plant-1of sesame was recorded with YLM-66 (5.49) which was statistically on par with YLM-17. Madhavi registered the lower number of branches plant-1over other varieties. This might be due to improved crop growth duration and immediate availability of adequate quantity of nutrients which in turn enhanced the crop growth. These observations were in agreement with Chongdar et al. (2015).

Among the sesame varieties tested, YLM-66 (913 kg ha-1) and YLM-17 (869 kg ha-1) were significantly similar in recording higher seed yield. The variety Madhavi recorded the lower seed yield (Table 2.). The increase in sesame yield could be mainly attributed to its genetic potentiality to utilize and translocate the photosynthates from source to sink more efficiently under given set of climatic conditions. Such yield differences in the performance of genotypes were reported earlier by Basavaraj et al. (2000) and Adebisi et al. (2005).

As regards the sulphur levels, application of sulphur at 60 kg ha-1 recorded higher seed yield (906 kg ha-1) which in turn comparable with the sulphur @ 40 kg ha-1 (873 kg ha-1). Lower values were recorded with control. Higher seed yield may be due to balanced nutritional environment and also due to stimulatory effect of sulphur on protein synthesis that further enhanced photosynthesis and yield contributing components which resulted in maximum seed yield. The above results were in conformity with the findings of Mondal et al. (2012) and Jat et al. (2017). 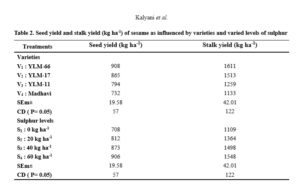 The sesame variety YLM-66 recorded higher stalk yield, which was however comparable with YLM-17 . While, the lower values were recorded with Madhavi. Superiority of producing higher values of stalk yield resulted in higher dry matter accumulation which in turn produced more stalk yield. Similar reports were given by Kumara et al. (2014).

Among the varied sulphur levels, higher stalk yield was recorded with the application of sulphur at 60 kg ha-1 (1548 kg ha-1) which in turn comparable with sulphur @ 40 kg ha-1. Lower values were recorded with control. Elevated straw yield with increasing levels of sulphur application might be due to higher plant growth and biomass production, possibly as a result of higher uptake of nutrients. Further, higher nutrient uptake led to higher vegetative and reproductive growth, thus enhancing stalk yield in the presence of sulphur. Results of the present investigation corroborate the findings of Saren et al. (2004), Sarkar and Saha (2005) and Kader and Mona (2013).

The present investigation revealed that sesame variety YLM-66 in combination with 40 kg S ha-1 is the best option for obtaining higher productivity, profitability and quality of sesame for Southern Agro-climatic Zone of Andhra Pradesh.

Basavaraj, B., Shetty, R.A and Hunshal, C.S. 2000. Response of sesame varieties to fertilizer and population levels in paddy lands of Tungabhadra project area during summer. Karnataka Journal of Agricultural Sciences. 13(1): 138-140.

Chongdar, S., Singharoy, A. Saha, A and Chhetri, B. 2015. Performance of summer sesame (Sesamum indicum L.) cultivars under varying dates of sowing in prevailing agro-climatic condition of North Bengal. Scientific Research and Essays. 10(12): 411-420.

Performance of sesame varieties under varied levels of ‘S’