Redgram is traditionally grown as an annual pulse crop in Asia, Africa, the Caribbean islands and Latin America. It is a good source of protein up to 22 percent, vitamins viz., thiamine, riboflavin, niacin and choline and minerals such as iron, iodine, calcium, phosphorus, sulphur and potassium. In addition to its primary use as a dhal, its immature green seeds and pods are consumed as vegetable (Yadav et al., 2021). India ranks first in redgram production globally 3.88 million tonnes cultivated in an area of 4.82 million hectares with a productivity of 804 kg ha-1 (Anonymous, 2020).

Under a changing climate scenario, new short duration super early genotypes of redgram help in achieving a higher harvest index. With the introduction of super early redgram varieties maturing within 90-100 days opens the possibility to explore redgram cultivation during the off- season and non-traditional niches, aiming for an increase the national production pool of pulses. Super early varieties also demonstrated photo insensitivity, maturity synchrony, hardiness and adaptability to multiple cropping systems (Saxena et al., 2019 and Naseeruddin et al., 2018). The low yield of redgram is not only due to its cultivation on marginal and sub marginal lands, but also due to poor crop management. For proper maintenance of the health of crops and to obtain a high yield, balanced fertilization is necessary throughout the crop period. Nitrogen, phosphorous and potassium are three major nutrients required for the crop production and should be used in proper proportion. Nitrogen and potassium when applied together have a synergistic effect on the crop. Only in the presence of an adequate amount of potassium the best response of nitrogen can be obtained (Sekhon et al., 2018). There is a need for identify suitable super early genotype of redgram and optimum dose of nutrients to increase the productivity and profitability of redgram.

The present investigation was carried out at wetland farm, S.V. Agricultural College, Tirupati of Acharya N.G. Ranga Agricultural University which is geographically situated at 13.5°N latitude and 79.5°E longitude with an altitude of 182.9 m above mean sea level in the Southern Agro-Climatic Zone of Andhra Pradesh. The present experiment was laid out in a split-plot design and replicated thrice. The treatments include five varieties viz., ICPL 11301 (V1), ICPL 20325 (V2), ICPL 20338 (V3),

The highest plant height was noticed with ICPL 88039, which was significantly superior over other genotypes tried. ICPL 20325 and ICPL 11301 were the next best varieties in recording higher plant height with no significant disparity between them (Table 1). This was followed by ICPL 20338 which was however comparable with ICPL 11255, which recorded the lowest plant height. The increase in plant height among the varieties might be due to the variation in their genetic makeup, internodal length, nutrient absorption capacity and conversion of radiant energy in presence of chlorophyll. The above results are in conformity with the findings of Ranjani et al. (2018), Deepika (2020) and Shruthi (2020).

Among the different nutrient levels tried, higher plant height of redgram was noticed with application of 150% RDF, which was however comparable with application of 125% RDF and significantly superior over 100 % RDF, which recorded lower plant height. This might be due to the fact that higher level of nutrient application 150 % RDF resulted in more availability, better uptake and translocation of plant nutrients to plants, which helped in differentiation and expansion of component cells, cell division and cell multiplication thereby producing better plant height. Similar results were also reported by Dalai et al. (2019) and Parameshwarareddy et al. (2019).

Leaf area index of redgram significantly varied due to nutrient levels. Crop fertilized with 150% RDF produced higher leaf area index, which was statistically at par with 125% RDF (Table 2). Significantly lower leaf area index was registered with 100% RDF. Higher leaf area index observed with application of 150% RDF might be due to increased nutrient availability in soil which made the plant to absorb more nutrients, which in turn increased the number of leaves, total leaf area plant- 1 and their effect on enlargement of cells of the leaf through their cell division and assimilation of photosynthates might have retained more leaf area. Similar findings were also reported by Nagamani (2015) and Parameswarareddy et al. (2019).

The highest dry matter accrual was noticed with ICPL 88039 which was significantly superior to other varieties investigated (Table 1). This could be mainly due to increase in plant height, leaf area index and due to their genetic makeup. Increased assimilatory surface area per plant might have led to increased biomass production, which ultimately led to the accumulation of a large quantity of photo assimilates. This is in accordance with the results reported by Shruthi et al. (2020). The next best variety was ICPL 20325 which was however comparable with ICPL 11301. The variety ICPL 11255 (V4) produced the lower dry matter, but was however comparable with ICPL 20338.

With regard to nutrient levels, higher dry matter accumulation was registered with application of 150% RDF which was in parity with application of 125% RDF. The lowest dry matter production was with 100% RDF, which was significantly lower than the other two higher nutrient levels. Higher dry matter production obtained with 150% RDF might be due to increased availability of nutrients over the longer periods, better utilization of available growth resources viz., nutrient, moisture and solar radiation to a greater extent. It resulted in favourable 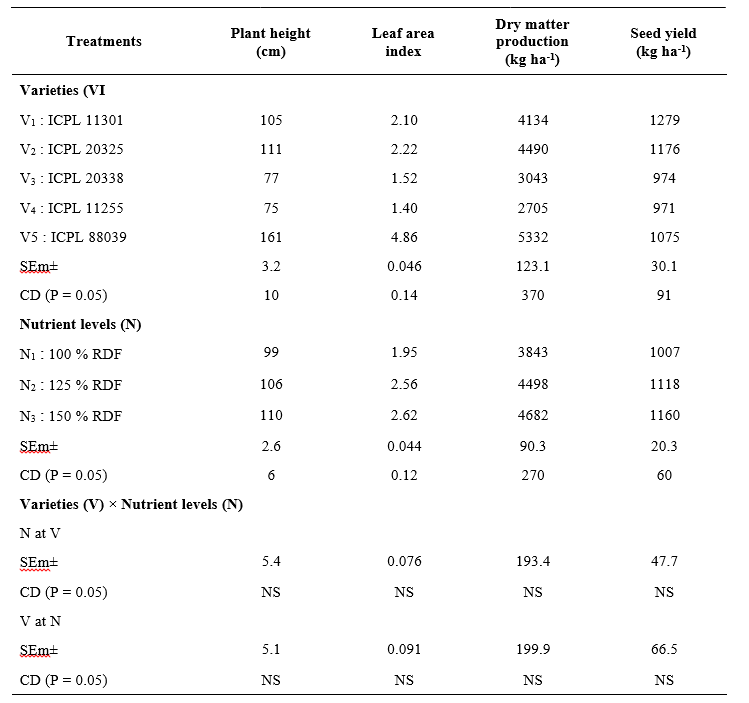 effect on cell enlargement and production of larger leaves. This might have eventually reflected in higher photosynthetic efficiency and thereby accumulated higher quantity of dry matter. Enhanced dry matter production with adequate supply of nutrients as evidenced in this investigation, corroborates with the findings of Dalai et al. (2019) and Preetham et al. (2020).

Significantly higher seed yield was produced by the variety ICPL 11301 (Table 1). ICPL 20325 and ICPL 88039 were the next best varieties in recording higher seed yield, with significant disparity between them. Whereas, the lower seed yield was recorded with ICPL 11255, which was comparable with ICPL 20338. Difference in yields among the varieties can be attributed to their genetic potentiality to utilize and translocate photosynthates from source to sink. ICPL 11301 was found to be the best redgram variety with a seed yield of 1279 kg ha-1 due to efficient translocation of photosynthates from source to sink. However, ICPL 88039 recorded higher growth parameters during crop growth period but produced lower yield than ICPL 11301 due to poor translocation of photosynthates from vegetative parts to pods during pod development stage and maturity. Similar results of higher seed yield with different genotypes were reported by Srivastava et al. (2012) and Ranjani et al. (2018).

On the basis of above investigation, it can be inferred that ICPL 88039 was superior with respect to growth attributes and ICPL 11301 registered significantly higher seed yield compared other varieties tried. With respect to nutrient doses, application of 150% RDF resulted in higher growth attributes and seed yield which was however comparable with 125% RDF. It could be inferred that super early redgram variety, ICPL 11301 in combination with application of 125% RDF (25 kg N, 62.5 kg P2O5 and 60 kg K2O) is the best option for obtaining higher growth parameters and seed yield on sandy loam soils of Sourhern Agro-Climatic Zone of Andhra Pradesh.

Parameshwarareddy, R., Angadi, S.S and Yenagi, B.S. 2019. Influence of plant spacing and fertilizer levels on growth and yield of summer groundnut. Journal of Pharmacognosy and Phytochemistry. 8(3): 3745- 3748.