B. LAKSHMI ROJA*, N.C. VENKATESWARLU, A. RAJESH AND B. RAMANAMURTHY

“Blackgram” (Vigna mungo L.) is commonly known as urd, uradbean, mashbean, minapapappu, mungbean, black mapte bean, which is one of the most assertive pulse crops cultivated worldwide in tropical and subtropical regions. It has wide range of adaptability and can be grown around the year in different agro-ecological regions of the country. Pulses are generally stored for a year or more than a year in different types of storage structures or containers until the next harvest where in measurable loss was seen due to infestation by number of stored grain insect pests. Pulses are being attacked by more than 25 species of stored product insects viz., Callasobruchus chinensis (Linnaeus), Rhizopertha dominica (Fabricius), Tribolium castaneum (Herbest), Corcyra cephalonica (Stainton), Lasioderma serricorne (Fabricius), Stegobium paniceum (Linnaeus) and few species of mites (Prabhakar, 1979). The seeds of all pulses are more vulnerable to bruchids infestation. Their damage can be observed both in the field as well as in storage. Primary infestation which happens in the field is practically unimportant, while secondary infestation that happens during the storage is causing substantial losses to the seeds of pulses.

The pulse beetle, Callosobruchus chinensis (Bruchidae : Coleoptera) is a cosmopolitan and polyphagous pest causing huge damage to blackgram seeds during storage conditions. The blackgram seed is found to be infested by two main species of Callosobruchus i.e., Callosobruchus chinensis (Linnaeus) and Callosobruchus maculatus (Fabricius) in large scale storage. Among the eight legumes, the highest damage caused by C. chinensis was reported in greengram (79.59%) followed by blackgram (59.30%), cowpea
(51.04%), white gram (29.98%) and pea (1.70%) (Muhamad, 2007). C. chinensis has a very short life cycle, hence many number of generations in a year with high reproductive potential. The beetle shows a high degree of specificity for its development towards various legumes. Gujar and Yadav (1978) reported 55 to 60 per cent losses in seed weight and 45.50 to 66.30 per cent losses in protein content due to its damage and seeds are not fit for human consumption as well as for cultivation purpose. The storage containers play a pivotal role in decreasing the degree of damage done by the bruchid in storage condition and also a profound influence on the population build-up of bruchid. 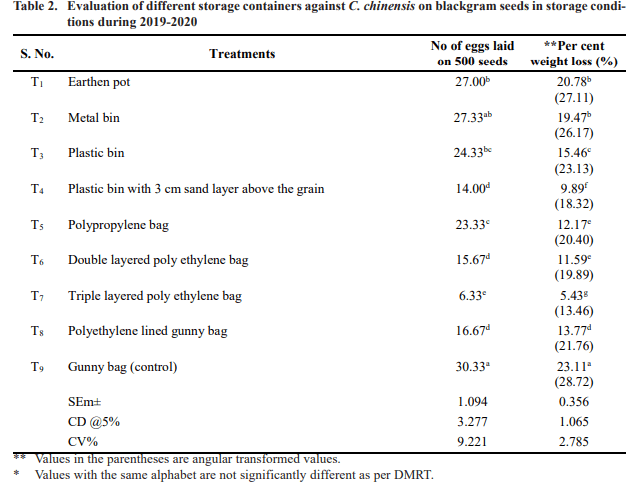 Mass culture of the pulse beetle

The mother culture of C. chinensis was obtained from the local market and it was multiplied on locally available greengram seeds under laboratory conditions. About 20 pairs of adult beetles were released into plastic boxes containing 500 g of disinfested greengram seeds at 55ºC for 4 hours. Fifteen of such containers were maintained for mass culturing of the test insect. The boxes were kept undisturbed under laboratory condition till the emergence of F1 adults. The test insect was mass cultured in the laboratory for 2-3 generations and freshly emerged adults were used in the experimental study.

Nine different containers were used to conduct the experiment as follows;
One kg of TBG-104 blackgram variety was taken in each storage container and 10 pairs of freshly emerged adults of C. chinensis were released in each container treatment wise. The containers were assessed to C. chinensis infestation based on the following parameters.

No. of eggs laid

After 15 days of infestation, 500 seeds of blackgram were sampled randomly from each container and observation on number of eggs laid on seeds were recorded and later added to the same container. The containers were kept in the laboratory without disturbing up to 90 days.

Fecundity of C. chinensis on blackgram

The results of the present studies revealed that the per cent weight loss caused by the pulse beetle after 90 days varied from 5.43 to 20.78 per cent. Whereas in control (gunny bags) 23.11 per cent of weight loss was recorded (Table 3.1).
The highest percentage of weight loss was observed in earthen pot (20.78%) followed by metal bin (19.47%) which were statistically on par with each other. While the lowest per cent weight loss was observed in triple layered polyethylene bag (5.43%) followed by Plastic bin with 3 cm sand layer above the grain (9.89%), double layered polyethylene bag (11.59%), polypropylene bag (12.17%) which were significantly different from other

treatments. While the treatments polyethylene lined gunny bag and plastic bin were recorded with 13.77 and 15.46 per cent weight loss of blackgram seeds and are significantly different with each other.

The present results are similar with the findings of Dwivedi et al. (1991) who reported that the maximum damage was caused by pulse beetles in urd (8.7%) and moong (8.3%) stored in bags for a period of 6 months. Tin containers proved to be the best structures for storage of urd and moong at farm level. Moong was relatively preferred than urd during storage by pulse beetles. Tammanagouda (2002) observed seed infestation of 34.10 per cent in polythene bag as compared to those in cloth bag at the end of 10 months of storage period. Meena and Bhargava (2003) revealed that significantly higher dry mass loss (5.29%) and damage kernels (29.24%) were noticed in mud pot kernels. The number of adults varied from 2.33 in gunny bag to 4.00 in cloth bag against C. cephalonica in stored kernels of groundnut. Sharma (2013) found maximum weight loss in mud pot (1.40%), followed by gunny bag (1.33%), urea bag (1.25%), cloth bag (1.16%), polythene bag (1.00%) and metal bin (0.90%) against Trogoderma granarium.

The present results are in accordance with Sudini et al. (2015) who evaluated different containers and reported that after four months of storage under ambient conditions, triple-layer bags supported retention of seed weight, germinability and oil content significantly better than cloth bags. Baributsa et al. (2017) After 6-7 months of storage period, weight loss of 8.2% for unshelled groundnuts and 28.7 per cent for shelled groundnut was recorded when stored in woven bags. In Purdue Improved Crop Storage (PICS) bags for both shelled and unshelled groundnut, the density of insect pests did not increase and there was no weight loss and germination was also not affected. Manjunath et al. (2019) investigated the effect of different bins and bags against Caryedon serratus on oviposition preference, adult emergence and per cent pod damage. The results revealed that least infestation was observed in magic cover followed by plastic bin and triple layered polythene bag. The per cent pod damage was least in plastic bin followed by magic cover and triple layered polythene bag. Whereas, per cent weight loss recorded was least in magic cover followed by triple layered polythene bag and plastic bin. Swamy et al. (2019) who revealed that among the storage containers tested against Sitophilus zeamais; maize seeds stored in

It is to conclude that triple layered polyethylene bag and plastic bin with 3 cm sand layer above the grain were found superior and effective in minimizing the oviposition and per cent weight loss against pulse beetle attack in the storage of the blackgram seed.

The superiority of triple layered polyethylene bagand plastic bin with 3 cm sand above the grain may be due to unfavourable structural compositions that with the growth and development of pulse beetle. In triple layered polyethylene bags there will be less amount of oxygen available for the insects for their development. The plastic bin with sand layer was providing anaerobic conditions filling the spaces which makes the microclimate unsuitable for the development of the pulse beetle. Earthen pot, metal bin and gunny bag were very comfortable for the egg laying and development as they maintain good moisture and optimum temperature conditions to the pulse beetle. Hence, triple layered polyethylene bag and plastic bin with 3 cm sand layer above the grain may be used for storing the blackgram seeds without compromising with the quality of seeds.

Meena, B.L and Bhargava, M.C. 2003. Effect of different storage containers on the incidence of Corcyra cephalonica in stored kernels of groundnut. Indian Journal of Applied Entomology. 17: 41-43.