Maize (Zea mays L.) being the second most important cereal crop in the world in terms of acreage is often called as “Queen of Cereals”. Global maize production touched 1147 million MT during 2018, wherein, USA has been the leading producer, followed by China, accounting for about 34 per cent and 22 per cent respectively. India contributes around 2.42 per cent of this production chart with a quantum of 28 million Metric tonnes in 2018 (Anonymous, 2018). India stands almost half the global production standards and therefore there is a great scope for improvement in the strategically important crop in the country. Maize is the only food cereal crop that can be grown in different seasons and requires moderate climatic condition for growth. According to industry estimates, India would require 45 million MT of Maize by the end of 2022, of which 30 million MT will be for feed and 15 million MT will be demanded by FSI (Food, Seed and Industry) (Maize vision 2022, FICCI). By 2050, the demand for maize will double in the developing world and maize is predicted to become the crop with the greatest production globally and in the developing world by 2025 (Rosegrant et al., 2009).

The yield potential of a cultivar when grown in field, experiences various biotic (diseases, insects and weeds) and abiotic (temperature, moisture, wind, etc.) constraints, which reduces quantity and quality of the produce, resulting in crop losses. Among insects, though there is report of 250 insects in maize ecosystem (Mathur, 1992) but important ones are the key native pests, viz., stemborers, Chilo partellus Swinhoe and Sesamia inferens Walker, sorghum shoot fly, Atherigona spp. and the recent invasive pest, fall armyworm Spodoptera frugiperda (J.E. Smith), etc.,

The fall armyworm (FAW), Spodoptera frugiperda (J.E. Smith) (Lepidoptera : Noctuidae) is a highly polyphagous migratory pest, native to the tropical and subtropical region of Americas. The FAW has a very wide host range and recorded on more than 353 host plants (Montezano et al., 2018). The pest distribution was restricted in the American continents till 2015. A severe outbreak of FAW in maize was reported from African countries in 2016 (Goergen et al., 2016). In 2018, mid- May, the occurrence of invasive fall armyworm on maize has been first reported in Karnataka, India (Sharanabasappa et al., 2018; Ganiger et al., 2018 and Shylesha et al., 2018).

In just two years since introduction, FAW has spread across all the maize growing states of our country, except the states of Himachal Pradesh and Jammu and Kashmir. In Andhra Pradesh, the pest was first sighted in Vishakapatnam, Srikakulam and Vizianagaram Districts in August 2018. Maize is an emerging second most important cereal crop after rice in Andhra Pradesh and it is necessary to know the incidence of the FAW among different districts of the state. Keeping the above in view, surveys were conducted to record the per cent incidence of fall armyworm in major maize growing districts of Andhra Pradesh.

The destructive invasive pest, fall armyworm extended its spread to various other crops including sorghum, ragi, sugarcane and bajra in Andhra Pradesh. It has become mandatory to conduct surveys to understand the incidence of the pest and its extent of damage in crops other than maize. Timely plant protection measures can control the pest from causing severe economic damage 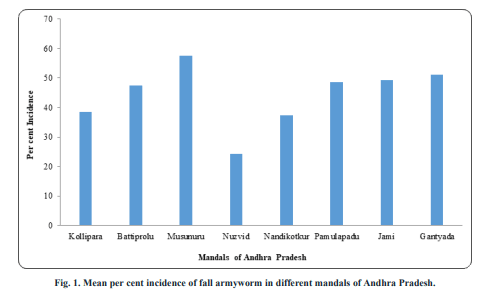 for which efforts should be taken on early warning of the pest by forecasting using proper surveys and surveillances.

We are thankful to the Department of Entomology and farm superintendent of S.V. Agricultural college, Tirupati for the timely help in conducting this study. This study is a part of M.Sc. Thesis of the first author.