Study on Costs, Returns and Constraints in Production Of Rabi Jowar in Kurnool District of Andhra Pradesh

The study was carried out during the year 2018-19. The purpose of selecting Kurnool district in Andhra Pradesh for the study was, because of its highest area and production under Rabi jowar when compared to other districts. Probability proportionate sampling was employed to select the number of farmers from the selected villages and the total sample constitutes to 120. Human labour is the most influencing component among various factors involved in the production process. The total cost of cultivation of Rabi jowar per hectare was calculated as ` 53,657.14. Among the total costs 75.42 per cent was occupied by variable costs and remaining 24.57 per cent was occupied by fixed costs. Cultivation cost of Rabi jowar according to cost concepts were calculated and they were, cost A1 ` 35066.94, cost B1 ` 35919.14, cost B2 ` 47169.14, cost C1 ` 42404.14, cost C2 ` 53654.14 and finally cost C3 ` 59019.55. Gross returns from per hectare of Rabi jowar was ` 78,000 and net return was ` 24,342.86. Farm income measures were worked out per hectare of Rabi jowar. The farm business income was worked out as ` 42933.06. Family labour income and farm investment income were ` 30830.86 and ` 31082.65 respectively. When Returns per rupee of expenditure were worked out they stood at 0.41. Major constraint faced by farmer’s during cultivation of Rabi jowar was inadequate and untimely rainfall during the period of harvesting.

Agriculture is the major occupation in India, nearly 70 percent of country’s population depends on agriculture either directly or indirectly for their livelihood. Production of food grains has increased from 51 million tonnes during 1950-51 to 285.2 million tonnes during 2018-19 (FAO, 2019). Millets are generally cultivated in low-fertile land, tribal and rain-fed areas. These areas include Andhra Pradesh, Gujarat, Chhattisgarh, Haryana, Rajasthan, Maharashtra, Madhya Pradesh, Karnataka, Tamil Nadu, Uttar Pradesh and Telangana. Millets are often referred as coarse cereals and also nutri-cereals because of nutrient richness of grains. India is the leading producer of millets followed by Africa. Major millets grown in India are jowar, bajra, ragi, banyard millet, proso millet, foaxtail millet and kodo millet. Jowar is called as great millet due to its grain size among the millets. The major jowar producing states are Maharashtra, Karnataka, Gujarat, Madhya Pradesh and Andhra Pradesh. Area of jowar in Kurnool district was about 742 and 63673 hectares in kharif and Rabi respectively and with total production of 60252 tonnes and the productivity was 935 kg per hectare in the year 2018-19 (Anonymous, 2019).

The list of all 54 mandals of kurnool district, was prepared and three mandals viz., Banaganapalli, Koilakuntla and Allagadda were purposively selected for the present study based on the maximum area under Rabi jowar. All the villages in selected mandals were listed out and four villages from each selected mandals were purposively selected based on the criterion of maximum area under Rabi jowar thus making the total sample villages to twelve. All the farmers in the selected villages were listed out and probability proportionate sampling was employed to get the sample from each village. The total sample size constitutes to 120. After getting the sample the farmers were selected randomly. The primary data required for the study were collected through personal interview with the help of a pre-tested schedule.

Cost concepts defined by Commission for Agricultural Costs and Prices (CACP) were followed to estimate the cost of cultivation and derive the measures of efficiency viz., farm business income, family labour income, net income and farm investment income . The cost concepts viz., cost A1, cost A2, cost B1, cost B2 and cost C1, cost C2, cost C3 were used in the present study and they are derived as follows.

Cost C3 = Cost C2 + 10 per cent of cost C2 as management cost. (On account of managerial functions performed by farmers).

Garrett’s ranking technique was employed to prioritize or rank the problems posed by the farmers in production and marketing of Rabi jowar.

Garratt’s Formulae for converting rank into per cent is given by:

Costs and Returns of Rabi Jowar
Any enterprise to gain profitability depends on its cost structure, output and price received by entrepreneur.
Cost structure depends on expenditure made on inputs and services utilized in the process of production.

Human labour is the most influencing component among various factors involved in the production process. The reason behind this is that successful completion of operations in the farm heavily depends on the human resources involved. So, an effort had been made to analyze the labour utilization pattern in the sample of jowar farms considered. The result is presented (Table 1).

A keen observation of Table 1 revealed that the total man days employed in the production of per hectare Rabi jowar was 38.78. Cultural operations performed in Rabi jowar are land preparation, sowing, spraying of fertilizers and plant protection chemicals, irrigation, weeding, inter cultivation, harvesting and threshing. Among the total man days 12.97 and 25.81 are owned and hired man days respectively. Highest number of man days are observed in harvesting, they are 13.76 (35.48%). Least number of man days are seen in inter cultivation and they are 0.68 (1.75%). Land preparation is the first and foremost cultural operation in cultivation of jowar and the total number of man days required for land preparation are
5.02 (12.94%). Next important operation is sowing and totally 3.04 (7.84%) man days are required. The man days required for spraying of fertilizers and plant protection chemicals are 3.24 (8.35%) and 2.79 (7.19%) respectively. Weeding is the further most important operation which requires 3.50 (9.02) man days. Threshing is the last operation done by farmer on the threshing floor with 5.66 (14.59%) man days. 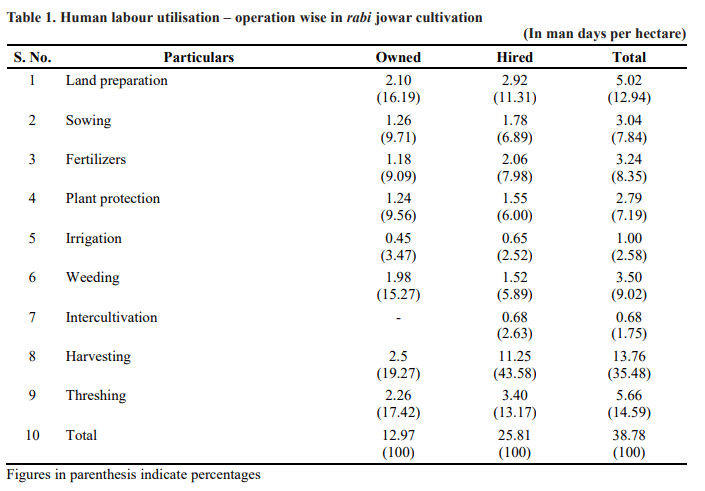 Economic costs include both explicit and implicit costs. To arrive at the profitability of any project these 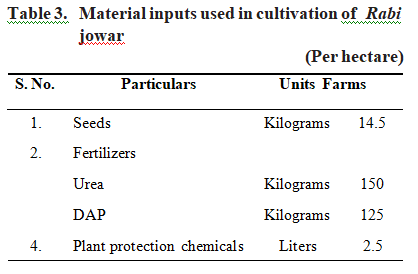 costs should be covered by gross income. Usually farmers feel satisfied only when gross income exceeds explicit costs. More specifically, the total costs were divided in to operational and fixed costs. Hence the above costs were worked out for per hectare of Rabi jowar crop and mentioned (Table 4).

The interest on working capital was calculated based on interest given to crop loans by commercial banks in Kurnool district which was 12 per cent and it was calculated as ` 989.94. The fixed costs include land revenue, depreciation on machinery and Rental value of owned land. The land revenue was ` 100 and Rental value of owned land was ` 11,250. Among the fixed costs rental value was observed as highest with a share of 20.97 per cent of total cost, Similar result was reported (Kusuma et al., 2013).

The cost concepts generally employed in the farm management studies are used in the current study. Hence, Cost A1, Cost A2, Cost B1, Cost B2, Cost C1, Cost C2 and Cost C3 were utilized in the present study. Cost C2 is the ample one because it includes both fixed and variable 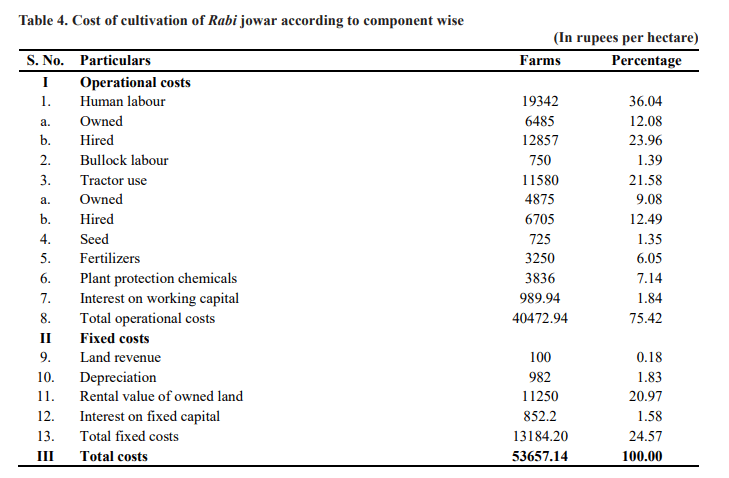 costs and therefore provides basis to compare different types of operational holdings. Cultivation cost of Rabi jowar according to cost concepts were calculated and mentioned (Table 5).

Output and returns per hectare of Rabi jowar

The material output and income from per hectare Rabi jowar were presented (Table 6). 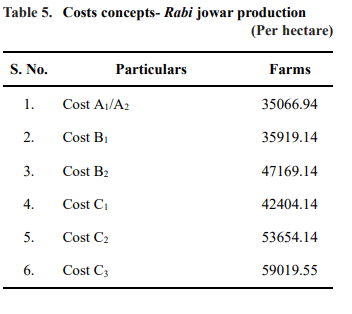 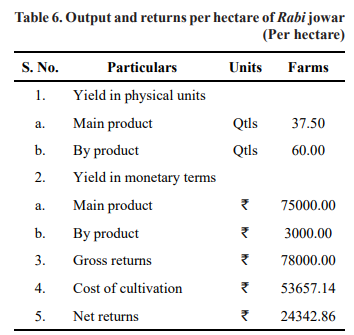 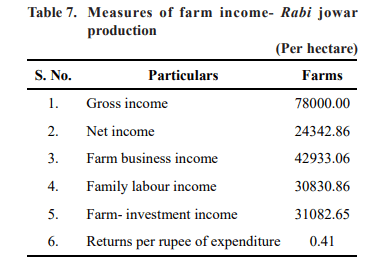 Gross income alone does not notify success of any farm business even though it is best measure to estimate farms production and efficiency. For this reason net income was calculated. Relation between net income and success of farm business is directly proportional. Net income per hectare Rabi jowar was ` 24,342.86.

Any business enterprise has two elements and they are costs and returns. Costs indicate the worth of inputs utilized in the production process and returns indicate the value of output achieved. Success of any farm business depends on comparative magnitude of costs and returns. A vital element in farm business is the way of allocation of resources. A measuring tool is required to provide guidelines and standards for evaluating the use of resources. Therefore, to achieve this farm efficiency measures were computed viz., farm business income, family labour income, farm investment income and net income. Returns per rupee of investment were computed in addition to farm efficiency measures and the results were presented (Table 7).

Farm income measures were calculated out per hectare of Rabi jowar. The farm business income was worked out as ` 42933.06. Family labour income and farm investment income were ` 30830.86 and ` 31082.65 respectively. When Returns per rupee of expenditure were worked out they stood at 0.41. Farmers were capable to get net income of 0.41 per rupee spent on Rabi jowar cultivation.

Constraints faced by the farmers in cultivation of Rabi jowar

The mean scores presented (Table 8), clearly indicate that the major constraint faced by the farmer’s during
cultivation of Rabi jowar was inadequate and untimely rainfall during the period of harvesting (76.33), which reduced the grain quality and was the main reason for the reduction in yield quality of Rabi jowar. The second constraint was high wage rate (66.32), farmer’s felt that it was the main reason for increase in cultivation cost. The third constraint faced by the farmer’s was high rate of fertilizers and plant protection chemicals (55.72), because many of the farmer’s were unable to meet the high costs of fertilizers and pesticides. The fourth constraint faced by the farmer’s was high rate of ploughing by tractor (51.75), many of the famer’s were hiring the tractors for ploughing and they felt that hiring charges were too high. The fifth constraint was high prevalence of pests and diseases (39.73) like stem borer. Few farmers felt that labour shortage in farm (38.05) and non-availability of loan in time (22.63) were the constraints in cultivation of Rabi jowar. Hile et al. (2013) studied problems faced by farmers in cultivation of rabi jowar in western Maharastra and reported that high wage rate was a major problem.

Among the operational costs the major portion was constituted by human labour and the least amount was spent on seeds. Major constraint faced by farmer’s during cultivation of Rabi jowar was inadequate and untimely

rainfall during the period of harvesting, which reduced the grain quality and was the main reason for the reduction in yield quality of Rabi jowar.

Kusuma, D.K., Jayashree, A., Handigol and Kumara, B.R. 2013. An Economic Analysis of Production and Value Addition in Foxtail millet in Bellary District of Karnataka. Agricultural Economics and Statistics. 4(1): 68-72.