INTERRELATIONSHIPS AMONG YIELD, YIELD COMPONENTS AND WATER USE EFFICIENCY RELATED TRAITS IN F2 POPULATION OF LM 95 × EC 362096 CROSS IN MUNGBEAN

Mungbean is an important grain legume grown worldwide in tropical and sub-tropical regions. In the developed countries, grain legumes are an important indirect source of protein. However, for many developing countries, pulses constitute cheap and readily available source of dietary protein. Therefore, enhancing the yield and quality parameters of pulse crop is the only practical means of solving the widespread protein malnutrition among the less privileged classes of society. Although intensive research work has been done on genetic architecture of yield and yield attributes of mungbean, limited work was done on yield attributes along with water use efficiency (WUE) and heat stress tolerance related traits. Realizing the significance of drought and heat stress on yield components there is an immediate need to enhance the genetic potential of mungbean genotypes with high yield and drought and heat stress tolerance.

Drought and heat stress resistance are quantitative characters with complex inheritance. In order to formulate proper and effective breeding objectives in a drought breeding program, the breeder should understand the nature of the trait to be manipulated. WUE can be used as a selection criterion for drought resistance (Teare et al., 1982). Passioura (1996) proposed to view grain yield as a partial function of WUE in his equation (Y = T × WUE × HI) signifying the importance of total Transpiration(T) and Water Use Efficiency (WUE) in determining the total biomass production and yield. This equation highlights that increase in yield can be achieved through increase in WUE.

To exploit the existing genetic variability for seed yield as efficiently as possible, the breeder would need a comprehensive knowledge regarding the association of component traits with yield. This would facilitate effective selection for simultaneous improvement of one or more yield influencing components. However, the correlation between yield and its component characters is often misleading, since it is affected by the inter-relationships among the component traits. Hence path coefficient analysis developed by Wright (1921) helps in partitioning of the correlation coefficients into direct and indirect effects and to assess the relative contribution of each component character to seed yield. Integration of information on correlation, path analysis for seed yield and its component traits and their application in selection of superior segregants will be helpful in bringing varietal improvement in mungbean. Path analysis provides information about the cause and effect in understanding the association between two variables. It reveals whether the association of characters with yield is due to their direct effect on yield or it is a consequence of their indirect effects via., other component characters. Hence, the study of direct and indirect effects through path analysis enables the breeders to judge the important component characters during selection. It provides the basis for selection of superior genotypes from the diverse breeding populations.

The experimental material comprising of F2 populations of three crosses viz., ML 267×LGG 528, MGG 390×LM 95 and LM 95×EC 362096 were grown at the dry land farm, S.V. Agricultural College, Tirupati during rabi, 2017 in compact family block design with two replications. F2 populations were raised in 10 rows of three-meter length following a spacing of 30 cm between the rows and 10 cm between the plants within a row. As a basal dressing, fertilizers viz., urea and single super phosphate to supply 20 kg N and 40 kg P2O5ha-1 were applied respectively to experimental plots. Thinning was done to leave single seedling per hill after 15 days of sowing. Irrigation, weeding and plant protection measures were taken up as and when needed during the crop growth period, as per the standard recommended package of practices to raise a good and healthy crop.

Observations were recorded on 80 randomly chosen competitive plants from each genotype in each replication for all the characters. The values of 80 competitive plants were averaged and expressed as mean of the respective characters. Path coefficient analysis was carried out by the procedure originally proposed by Wright (1921) which was subsequently elaborated by Dewey and Lu (1959) to estimate the direct and indirect effects of the individual characters on yield.

In F2 population of the cross, LM 95 x EC 362096, path coefficient analysis was done for the traits viz., days to maturity, plant height, number of branches per plant, number of clusters per plant, number of pods per cluster, number of pods per plant and SCMR which exhibited significant correlation with seed yield per plant and the results were presented in the Table 1. In the present study, the residual effect was 0.12 in the path coefficient analysis which indicated that the traits considered in this experiment are sufficient to account for variation in yield.

The significant positive correlation of days to maturity with seed yield per plant (0.219) was mainly due to its low positive direct effect (0.0994) and its moderate indirect positive effect through number of pods per plant (0.2118).

The trait, number of branches per plant showed significant positive correlation (0.683) with seed yield due to its high indirect positive effect (0.8034) through number of pods per plant even though its direct effect was negligible (0.0003).

Significant positive correlation of number of pods per cluster with seed yield (0.253) was observed due to its low positive direct effect (0.1103) and its high indirect effect through pods per plant (0.3238).

Interrelationship among yield attributes and WUE in mungbean 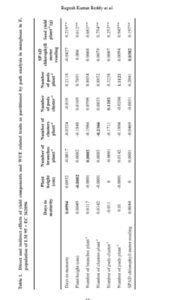 Results of path analysis for seed yield revealed that direct effect of number of pods per plant was high and positive. It indicates that this trait is the major contributing factor to seed yield and hence emphasis should be given to this character while making selection for realizing improvement in seed yield in mungbean. Pods per plant was identified as important yield component by Lakshman and Ruben, (1989), Pandey et al. (2007), Khajudparn and Tantasawat (2011), Ahmad et al. (2013), Jyothsna and Anuradha (2013), Srikanth et al. (2013), Lalinia and Khameneh (2014), Kate et al. (2017). In the cross, LM 95 × EC 362096 emphasis should be laid on number of pods per plant, number of pods per cluster, days to maturity and SCMR during selection for breeding high yielding types.

Khajudparn, P and Tantasawat, P. 2011. Relationships and variability of agronomic and physiological characters in mungbean. African Journal of Biotechnology. 10(49): 9992-10000.

Lavanya, G.R and Toms, B. 2009. Association and interrelationship among yield contributing characters in mungbean. Journal of Food Legumes. 22(1):65-67.