A field experiment was carried out during summer, 2019 on sandy loam soils of wetland farm of S.V. Agricultural College, Tirupati campus of Acharya N.G. Ranga Agricultural University. The experiment was laid out in split-plot design and replicated thrice with three induced moisture stress levels viz., M1 – No stress (Control), M2 – Withholding irrigation at flowering stage, M3 – Withholding irrigation at pod formation stage in main plots and five foliar spray treatments S1 – 0.5% KNO3, S2 – 2% Urea, S3 – 0.01% Salicylic acid, S4 – 0.5% 19-19-19 and S5 – Water spray twice during stress period at flowering and pod formation stages in sub plots. The higher initial and final population, growth parameters and seed yield were found with no stress and their lower values were observed with the treatment in which stress was imposed at flowering stage. Among the foliar spray treatments, application of 0.5% KNO3 resulted in higher initial and final population, growth parameters and seed yield.

Pulses are usually known as food legumes, which are rich in proteins and found to be main source of protein to vegetarians of India. It is the second important constituent of Indian diet after cereals. Pulses play an indispensable role in Indian agriculture as they restore soil fertility by fixing atmospheric nitrogen through their nodules. These are drought insusceptible crops and hinder soil erosion due to their deep root system and better ground coverage hence, known as “Marvel of Nature”.

Among the grain legumes, blackgram is an ancient and well-known leguminous crop of Asia. It thrives better in all the periods and it can be grown as a sole or inter or fallow crop. It is popular because of its nutritional quality having rich protein (26.2%), carbohydrates (56.6%), fats (1.2%), minerals, amino acids, phosphoric acid and vitamins (Shashikumar et al, 2013). Blackgram is grown mostly during rabi and summer seasons under low soil moisture conditions. As a result, there was water deficit for the crop at critical stages, which affects the nutrient uptake, leading to yield reduction.

A suited way of plant feeding during and after drought is through foliar sprayings (Rao et al., 2015). It has been well established that the nutrients, which are absorbed through roots, can also be absorbed with equal efficiency through foliage. Foliar application is attributable with the advantage of quick and effective utilization of nutrients removed through leaching and helps in regulating the uptake of nutrients by plants (Manonmani and Srimathi, 2009). Hence the present study was conducted to find out the effect of moisture stress and foliar nutrition on growth parameters and yield of summer blackgram. 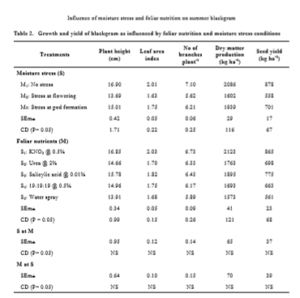 Growth parameters viz., plant height, leaf area index, number of branches plant-1 and dry matter production were significantly influenced by moisture stress treatments and foliar nutrition and the interaction effect between them was found to be non-significant (Table 2). Significantly higher growth parameters were recorded with no stress compared to that of stress at pod formation. Stress at flowering stage resulted in lower plant growth. Due to enhanced senescence and low turgid potential, which are the driving forces for cell division and cell extension, might have resulted in reduced leaf area under moisture stress conditions enforced at flowering phase. Ali et al. (2011) recorded similar results in maize. Foliar application of 0.5% KNO3 resulted in higher growth parameters whereas water spray recorded their lowest values. The increase in growth parameters might be due to additional supply of nutrients through foliar nutrition which might have enhanced cell division (or) cell elongation and better translocation of nutrients. These results are in harmony with the findings of Lakshmi et al. (2018).

The influence of moisture stress treatments and foliar nutrition on the seed yield of blackgram was found to be significant. Higher seed yield was recorded with no stress treatment followed by stress at pod formation stage. Significantly lower yield was obtained with the stress imposed at flowering stage. Lower seed yield in stress imposed treatment at flowering stage might be due to reduced growth parameters. These results are in accordance with Sudhakar et al. (2006) and Majeed et al. (2016). Foliar application of 0.5% KNO3 resulted in higher seed yield whereas water spray recorded significantly lower seed yield. Additional nutrient supply through foliar spray has resulted in enhanced leaf area and number of branches plant-1 resulting in increased accumulation of dry matter production and eventually increased the seed yield. These results are also consistent with the results of Rao et al. (2015) and Beg et al. (2013).

Results of the present experiment revealed that growing of blackgram without moisture stress resulted in better crop growth and yield. Further, spraying of KNO3 @ 0.5% twice at weekly intervals during the stress period i.e at flowering and pod formation stages was found to improve growth parameters and seed yield of blackgram. Hence, it is concluded that for summer blackgram under moisture stress, spraying of KNO3@ 0.5 % twice can improve the growth and yield.