Financial inclusion played a major role in driving away the poverty from the country. Financial inclusion is the process of ensuring access to appropriate financial products and services needed by all section of society in general and vulnerable groups such as weaker sections and low income groups in particular, at an affordable cost and in a faire and transparent manner by regulated mainstream institutional players. Present investigation was done to study the Financial inclusion in Chittoor district of Andhra Pradesh. The objective of the study was assessing the level of financial knowledge, attitude and behaviour of rural households. The NAFIS frame work was used. The study revealed that 42.85 per cent of agricultural households and about 50.00 per cent non-agricultural households were found to be have good financial literacy.

A good awareness level of households regarding various financial services has an important place in the mission of inclusive financing. India is a developing nation and it is very essential to build up a strong format of capital formation in Indian economy. The strong set up of capital formation can be rationalized through efficient knowledge and awareness of wide varieties of financial services both in rural and urban areas for making the India as a developed country. Even after introducing several varieties of financial services by mutual efforts of Government of India (GOI) and Reserve Bank of India (RBI), still households are not so aware about distinction between formal and informal sources of finance because of financial illiteracy (Sharma and Singh, 2016). So that, they are inefficient in invest their amount of savings in a right path and this weakness can be removed through providing effective financial literacy programs across the country. The household savings is very essential for economic development of any country because through this the money is circulating in economy from one sector to another sector and household savings helps in nation building and improving the growth of GDP and also provide the main source of investment financing to government and corporate sectors. That’s why it reduces the overtake of informal sources of finance i.e.

Money lenders and the efficiency and welfare of the poor people can be enhanced by providing avenues to secure and safe saving practices and facilitates a whole range of efficient financial services (Garg and Agarwal, 2014).

A multistage random sampling technique was employed for the present study. Chittoor district was selected purposively as it is one of the agriculturally advanced districts of Rayalaseema region of Andhra Pradesh. From the district, ten villages were selected based on the following criteria, which was followed by NABARD All India Rural Financial Inclusion Survey 2016-17.

1. Villages with less than 250 Households

2. Villages having a bank branch

3. Villages with no bank branch available

Number of villages selected from each strata were based on the proportion of number of villages in each of the 3 categories. Based on the first criteria Cheekatipalle, Parapatla, Dugiperi and Ayyavaripalem villages were selected. Mahal, Pallam and Santhavellore villages were selected based on second criteria and Gundloor, Vikruthamala and Kuvakoli were the villages with no bank branch available. From each village 10 households were randomly selected and the total no. of samples for the study was 100.The information related to the present study was collected through personal interview method. The data collected was pertained to the year 2017-18.

The present study adopted NAFIS (NABARD All India Rural Financial Inclusion Survey 2016-17) framework for measuring the level of financial literacy, which usually connotes a combination of financial knowledge, attitude and behaviour which is necessary for making sound financial decisions. NAFIS frame work was taken as a base to design the scales for measuring the financial knowledge, attitude and behaviour of sample respondents.

The sample respondents were enquired on their basic understanding of risk, return and inflation. The scale for measuring financial knowledge comprises of two statements on which the individual response was elicited. In order to assess the level of individual achievement on the scale of financial knowledge, a combined score was calculated considering the responses to the two statements. For calculating the scores, first each respondent was awarded a score of ‘1’ on a statement if he/she responded to it as ‘true’. The response ‘true’ was considered correct or desirable from the point of view of measuring financial knowledge. Incorrect responses were scored as ‘0’. Thereafter, a combined score was calculated for each individual by summing the score on the two individual statements. The total score that could be achieved by respondents could vary from a minimum of ‘0’ to a maximum of ‘2’. The respondents who scored ‘2’ were rated as high achievers having good financial knowledge.

The present study employed the financial attitude scale used in the NAFIS survey 2016-17, which comprised of three attitude related questions with responses captured on a five point Likert scale. The three scaled attitudinal questions included – ‘I find it more satisfying to spend money than to save it for the long term’, ‘I tend to live for today and let tomorrow take care of itself’, and ‘Money is there to be spent’. The responses were elicited on a five point scale where ‘1’ stood for ‘completely agree’ and ‘5’ meant ‘completely disagree’.

The financial behaviour comprised of a total of 8 questions, which elicit information about various ways in which the respondents manage their money, make financial decisions, keep a tab on their expenses, and timeliness in terms of paying bills etc. They also included questions on whether people set any long term goals, have a household budget and are personally or jointly responsible for it, the way they choose their financial products, and if they have borrowed anything to make ends meet. To understand the overall status of sample respondents with regard to financial behaviour, a combined score of these questions was calculated. The scoring mechanism has been explained in the Table 1. After allocating scores to each respondent on each of the behaviour related questions, the total score on financial behaviour was calculated for the individual respondents. 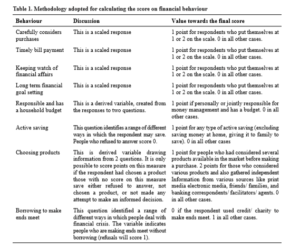 The total score could vary from a minimum of 1 to a maximum of 9. To set a performance benchmark, individuals with a total score of 6 or above were counted as those having a positive financial behaviour.

Financial literacy in context of this study is taken to connote a combination of awareness, knowledge, skill, attitude and behaviour necessary to make sound financial decisions and ultimately achieve individual financial wellbeing.

The proportion of respondents found to be knowledgeable about the financial products and services were showed in Table 2. 47.62 per cent of the agricultural households and 43.75 per cent of the non-agricultural households were given true response to the question, if someone offers you the chance to make a lot of money, there is also a chance that you will lose a lot of money. This clearly indicated that these respondents were knowledgeable about the potential risk and returns associated with money.

For the second question “high inflation means that the cost of living is increasing rapidly”. 75.00 per cent and 81.25 per cent of the agricultural and non-agricultural households were given the true responses. This represents that these respondents were aware of the meaning of inflation. The status of respondents with respect to achievement on financial knowledge score as discussed in the methodology presented in Table 2. From the table it was revealed that only 41.66 and 43.75 per cent of the agricultural and nonagricultural households were found to have sound financial knowledge as they got the score of 2. 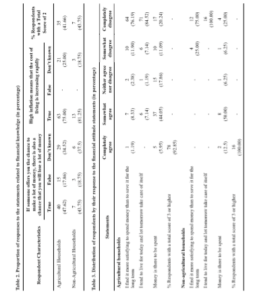 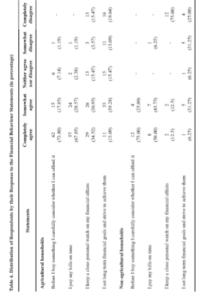 The financial behaviour comprised of a total of eight questions, which obtained information about various ways in which the respondents manage their money, make financial decisions, keep a tab on their expenses, and timeliness in terms of paying bills, etc. And also included questions on whether people set any long term goals, had a household budget and the way they choose their financial products. The responses obtained for each of the eight financial behaviour related statements were presented in Tables 4, 5 and 6.

The proportion of respondents that were found to have a positive financial behaviour i.e., score of 6 and above across various categories was presented in Table 6.