FIELD EVALUATION OF COORDINATED ENTRIES OF SUNFLOWER FOR IMPORTANT DISEASES

Sunflower is one of the important oilseed crop grown in India, being cropped in an area of 2.47 lakh ha in 201819, having a production and productivity of 2.19 lakh tonn and 886 kg ha-1 (Directors report, 2019-20) there of respectively. In recent years, the cropped area was reduced drastically, owing to many reasons. Major diseases like necrosis, leaf curl, Alternaria leaf spot and powdery mildew were observed on sunflower are few major reasons worth mentioning. Among virus diseases, leaf curl is one of the serious disease reported in India in recent years (Govindappa et al., 2011) apart from necrosis, belongs to Begomo virus group and infecting many crops. Necrosis is also causing substantial yield losses ranged from 30 to 90 percent in most of the sunflower growing regions of Andhra Pradesh, Karnataka and Maharashtra (Rao et al., 2002). Among Fungal diseases, Alternaria leaf spot and powdery mildew are major foliar diseases, affecting the crop cultivation. Though different methods are available for management of diseases, host plant resistance plays a major role as it is safe and environmentally friendly. Keeping the above points in view, screening or evaluation of different entries against diseases was performed under field conditions.

This experiment was carried out at RARS, Nandyal farm under All India Co-ordinated Research Project (AICRP) on sunflower scheme. Twenty entries during kharif 2018 and twelve entries during rabi 2018-19 were screened for major diseases of sunflower such as necrosis, Alternaria leaf spot, powdery mildew and leaf curl diseases. Among them, five entries were commonly . These entries were received from Indian Institute of Oilseed Research (IIOR), Hyderabad. The experiment was carried out in RBD design with two replications. Each entry was sown in two rows and each row is of 4.5M in length. For every two rows, one line of susceptible check (KBSH-44) was sown. It is susceptible to all diseases of sunflower for which screening was done.

Experimental filed was bordered with Parthenium plants, as Parthenium pollen was source of necrosis virus, the disease pressure may be increased. Data on different diseases was recorded when the susceptible check is showing more than 50% of disease or during flowering stage.

Necrosis and leaf curl incidence was calculated by using the following formula.

Ten plants in each entry were randomly selected for observation of both foliar diseases i.e., Alternaria leaf spot and powdery mildew diseases when the susceptible check was recorded more than 50% disease severity by using 0-9 scale (Table 2). Averages of disease infection score were taken and placed the entries into different disease reaction categories.

Five entries such as KBSH-81, IIOSH-2, KBSH-82, RSFH-1887 and LSFH-171 were screened in both the seasons and found that during kharif, for Alternaria leaf spot, three entries such as KBSH-81, RSFH-1887 and LSFH-171 showed susceptible reaction and one entry KBSH-82 showed highly susceptible reaction to Alternaria leaf spot. For powdery mildew disease in both seasons, three entries showed same reaction i.e., KBSH- 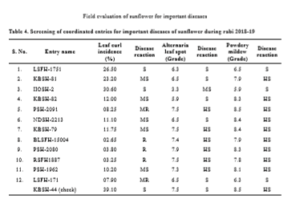 It was found that during kharif, 13 entries were resistant to necrosis, one entry each was moderately resistant (CSFH-146008) to Alternaria leaf spot and powdery mildew (IIOSH-2) diseases. During rabi 201819, three lines were found as resistant to leaf curl and further these results has to be confirmed with screening data under artificial conditions. If the resistance was confirmed under artificial conditions, the same may be useful for resistance breeding.

Dudhe, M.Y and Bharsakle. 2005. Screening of germplasm lines for resistance to Alternaria blight and necrosis disease in sunflower. Crop Protection. 1(2): 84.