Proso millet (Panicum miliaceum) also called as common millet, hog millet belongs to the Gramineae family, is a short duration crop and a significant minor millet, with high nutritional value and protein level of 11–12 per cent (Kalinova and Moudry, 2006). It adapts well to different soils and climatic conditions. The crop can thrive both on the plateau and at higher elevations. The chromosome number is 2n = 36. It is a self- pollinated crop; cross-pollination can occur up to 10 per cent. It is a short-day plant that will grow up to a height of 90 to 120 cm. The root system is adventitious. Profuse branching and tillering are found in Indian grown proso millet. Stems and leaves have slight hairs. The panicle is inflorescence.

As it is a C4 crop, it utilizes water effectively and is drought-resistant. Because of its rapid maturity, the crop can withstand drought. Due to its short life span, it escapes from drought. The optimum base temperature is 10°C. Development of proso millet is linked with temperature using Growing Degree Days (GDD) (Tonapi et al., 2015).

The amount of land under millet cultivation is rapidly diminishing. The COVID-19 pandemic has shown the fragility and frailty of our current food system. A millet-based agricultural system is unavoidable due to its high nutritious value and ability to grow in a wide

range of climatic conditions. Optimum sowing time and selection of improved cultivars play a remarkable role in exploiting the yield potential of crops under particular agro-climatic conditions. It governs the crop phenological development and the efficient conversion of biomass into economic yield.

Growing suitable varieties at an appropriate time is essential for ensuring optimum crop productivity. Temperature is an important environmental factor influencing the growth and development of crop plants. It influences crop phenology and yield (Bishnoi et al., 1995). Sowing of proso millet at an optimum time ensures a better harmony among soil, plant and atmospheric system. The variation in sowing time brings out varied plant environment interaction, which determines the efficiency of inherent physiological processes and ultimately the crop yield.

Data on weather parameters viz., Temperature (Maximum and Minimum) (°C), Relative Humidity (%), Rainfall (mm), Evaporation (mm) and Bright sunshine hours (hours day-1) are collected. Based on the above observations, the following Agrometeorological indices like Growing Degree Days (GDD), Photo Thermal Units (PTU) and Heat Use Efficiency (HUE) were computed during different phases of proso millet by adopting the procedure given by Rajput (1980). GDD was expressed in terms of ℃ day.

The accumulated PTU was determined by the following formula (Monteith, 1984).

where, day length refers to the maximum possible sunshine hours.

The higher yield values in II FN of June (D2) could be attributed to optimum environmental conditions for the growth and development of the crop which might enhance the accumulation of photosynthates from source to sink.

Sowing of proso millet on optimum date i.e., II FN of June had resulted in better development of source in the form of dry matter accumulation which contributed to the higher grain yield and good seed set is favored by warm weather prevailed during its maturity. Similar results were reported by Maurya et al. (2016).

Heat Use Efficiency (HUE) for economic yield i.e., grain yield, (kg ha-1) was calculated using the following formula. The unit of it is kg ha-1℃ day-1. the least was observed in the crop sown on the I FN of July of 2442.2 kg ha-1.

The delayed sowing may hasten the crop phenological development, thereby causing a significant reduction in crop yields. The I FN of July sown crops attained 50 percent flowering earlier than the others. The combined effect of all the growth and yield parameters resulted in increased above- ground biomass yield and grain yield in the II FN of June. Because early sowing increases the length of the growing period that plant might take advantage as favorable growing conditions and accumulates biomass as the highest yields generally result where the growing season is longest.

There was significant difference in total dry matter production with different dates of sowing. The crop 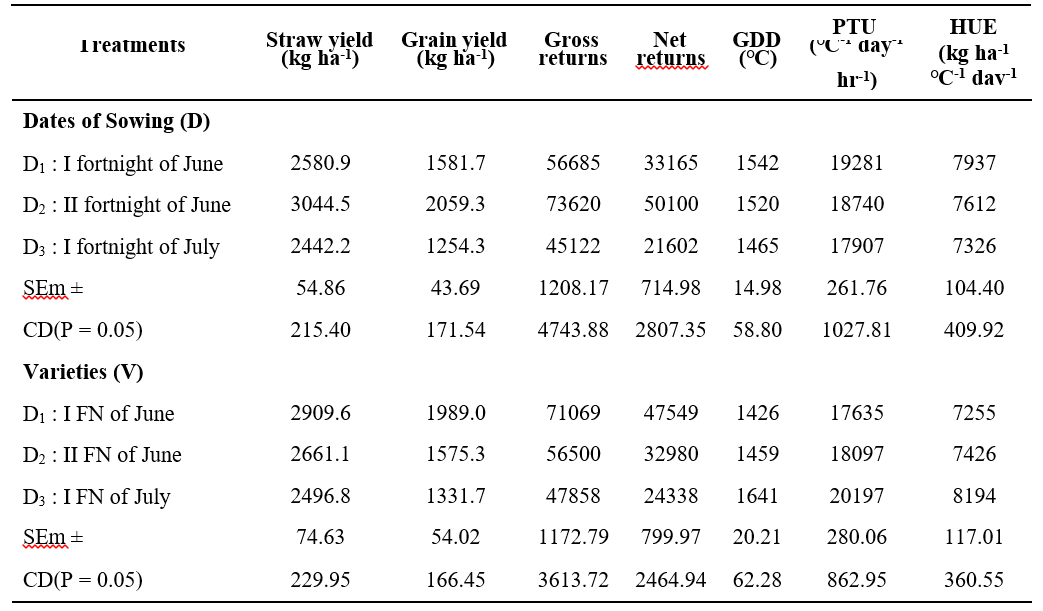 sown on the II FN of June recorded the highest dry matter accumulation of 452.3 g m-2 and the lowest value (376.1 g m-2) was recorded in the I FN of July at harvest. Moreover, congenial climatic conditions during the first and second dates of sowing are reflected in higher dry matter accumulation. These findings were substantiated by those reported by Deshmukh et al. (2013).

The total dry matter production of plant-1 differed significantly by the different varieties at all the stages of crop growth as mentioned in the Table 2. The variety V1 (CO 5) recorded significantly the highest dry matter (429.4 g m-2) followed by V2 (TNAU 202) and V3 (GPUP 8) with 414.1 g m-2 and 397.3 g m-2 respectively. The superiority in dry matter accumulation of CO 5 variety over other two varieties might be due to a high source- sink relationship. The results were corroborative with the findings of Triveni et al. (2018) and Raundal and Vidya (2017). This might be due to the early sown crop may receive favorable climatic conditions in terms of temperature and other climatic parameters during various crop growth stages.

Regarding the varieties tested, higher gross returns were realized with CO 5(V1) (71069 ` ha-1) which was significantly superior to the remaining other varieties. The next best variety was TNAU 202 (V2) (56500 ` ha-1) and the latter variety GPUP 8 (V3) (47858 ` ha-1) registered the lower returns. It might be due to the potential of different varieties. 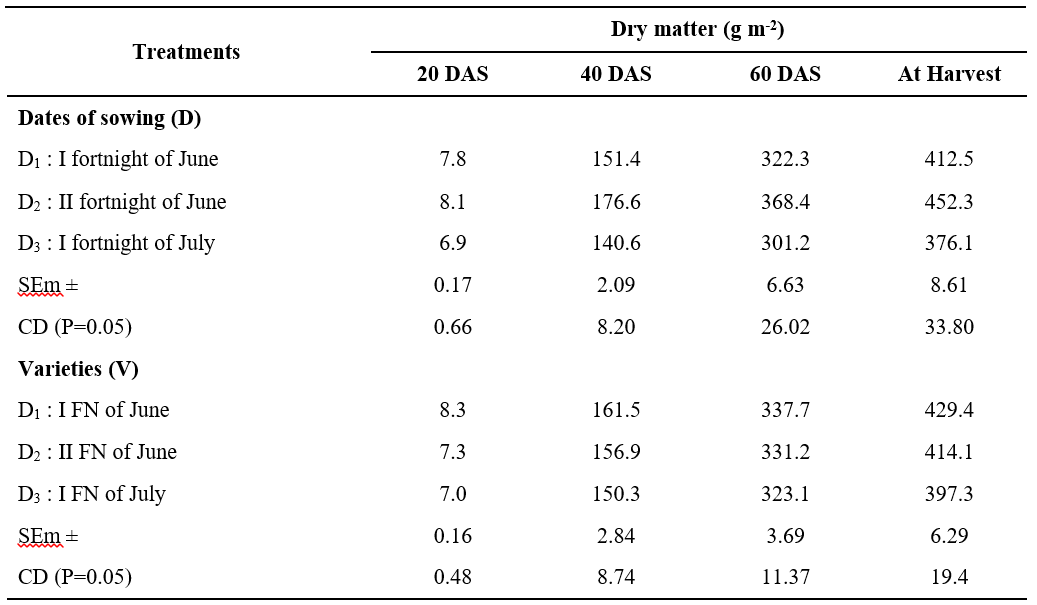 The optimum time of sowing and favorable weather conditions might have led to a proportionate increase in growth parameters like dry matter production, leaf area index, etc. These results corroborate the findings of Nigade et al. (2020)

℃ which was however comparable with II FN of June (D2) of 1520 ℃. The crop sown during I FN of July (D3) recorded the lower number of growing degree days of 1465 ℃ throughout its life cycle. D1 sown crop required more number of days to attain various growth stages. This is due to the existence of favorable conditions for crop growth and development. This is because the GDD which is the function of temperature in turn is a function of bright sunshine hours. The results are in close agreement with the findings of Londhe et al. (2020).

The data presented in the Table 1 revealed that a significantly higher number of photothermal units reported during I FN of June (D1) was 19281℃ day hr which was followed by II FN of June (D2) of 18740℃ day hr. The crop sown during I FN of July (D3) recorded the lower number of photothermal units of 17907℃ day hr. This might be due to the presence of cloudiness, lower temperature and lower sunshine hours for more days under the timely sown condition in comparison to late sown crops. Similar results are reported by Chakravarty and Sastry (1983).

Generally higher HUE is attributed to the higher yield but slight variations are noted. As the temperature was optimum throughout the growing period, it utilized heat more efficiently and increased biological activity. In contrast, low temperature and higher duration hampered normal biological activities resulting in lower yield as well as lower HUE. A similar relationship was also expressed by Thavaprakaash et al. (2007).

Based on the investigation of suitable varieties and dates of sowing, it can be concluded that the June II FN sowed was found to be the optimum time of sowing for proso millet in the southern agro-climatic zone of Andhra Pradesh, with the highest grain yield across all the genotypes.

All the varieties shows decreased grain yield on the late dates of sowing. A greater reduction in yield at the third date of sowing in GPUP 8 (59.00%) compared with the CO 5 on the second date of sowing. Among the genotypes tested CO 5 (V1) was found to be best followed by TNAU 202 (V2).

I am very much grateful to Acharya N.G Ranga Agricultural University, Guntur and Agricultural Research Station, Perumallapalle for providing seed material and guidance throughout my research work.

Monteith, J.C. 1984. Consistency and convenience in the choice of units for agriculture. Experimental Agriculture. 20: 115-117.