An experiment to study effect of spacing and fertilizer levels on growth and yield of little millet was conducted in Agricultural Research Station, Perumallapalle during kharif, 2018 with an objective of to optimize the fertilizer dose of nitrogen, phosphorus and potassium along with optimum plant population. The experimental results revealed that the highest grain yield (13.14 q ha-1) was recorded when seedlings of little millet were transplanted at a spacing of 25 cm × 25 cm and among the fertilizer levels, 40:40:20 kg of NPK ha-1 recorded the highest grain yield (12.66 q ha-1) of little millet in sandy loam soils of southern agroclimatic zone of Andhra Pradesh.

Little millet (Panicum sumatrence Roth, Expoemes and Schulters) is known as poor man’s crop. It is grown on the soils which are unsuitable for other crops. It can with stand both water logging and drought. It is also a good famine abled food crop as it can produces some grain under drought conditions when all other crops fail to produce. But yield of crop is limited due to its cultivation on marginal and sub marginal lands with imbalanced nutrition and ignorance in cultivation practices. The de-husked grain of this millet is cooked almost in a manner similar to rice and rotis cane be prepared with its flour. Presently, little millet crop is emerging as an important crop for developing functional foods for the expanding diabetic and obese population in urban people. Nitrogen plays a critical role in the process of photosynthesis by which plants manufacture their own food from sunlight. Nitrogen is major component of amino acids and the building blocks of protein. Phosphorus has vital role in plant growth and found in every living plant cell and it is also involved in several key plant functions including energy transfer, photosynthesis, transformation of sugars and starches, nutrient movement within the plant. Potassium is involved in many metabolic activities and translocation of photosynthates and confer drought tolerance and quality improvement. Crop geometry is an important factor for better utilization of moisture and nutrients from the soil (root spread) and above ground growth (plant canopy) by harvesting maximum possible solar radiation (Uphoff et al., 2011). The optimum plant population exerts near maximum pressure to exploit environmental resources to the fullest extent and thereby leading to higher yield of crop. However, maintenance of optimum planting density is always a big problem to the farmers and they maintain sub-optimum plant density leading to severe weed infestation, poor radiation use efficiency and lower yield, while dense plant population on the other hand may cause lodging, poor light penetration in the canopy and reduced photosynthesis due to shading of lower leaves and drastically reduce the yield (Pradhan et al., 2011). Optimum plant population of little millet needs to be adjusted as per growth habit of variety and prevailing agro climatic conditions, apart from identifying the optimum dose of fertilizers. Therefore, the present investigation on plant population by adjusting inter and intra-row spacing and fertilizer recommendation for little millet crop has been carried out in sandy loam soils. 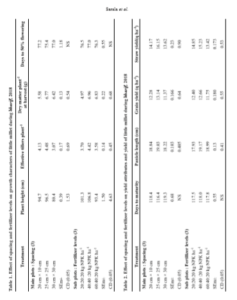 in available potassium (272 kg ha-1). The experiment was designed with three main plots assigned to spacing and three sub plots assigned to fertilizer doses in a spilt-plot design with three replications. The main plot treatments consisted of spacings viz., 20 cm × 10 cm, 25 cm × 25 cm and 30 cm × 30 cm and sub plot treatments viz., 20-2020, 40-40-20 and 60-40-20 kg NPK ha 1. The little variety, OLM 203 seeds were sown in nursery beds of 1 m × 2 m size in lines of 7.5 cm apart with seed rate of 8 kg ha-1. Twenty one days old seedlings were transplanted in the main field as per the main plot treatments. Farmyard manure 5 t ha-1 to soil at 15 days prior to sowing was applied commonly to all the treatments. Phosphorus and potassium were applied in the form of single super phosphate and muriate of potash at the time of transplanting as basal as per the treatments. Nitrogen was applied in the form of urea in two splits half at the time of transplanting and remaining half at 20 DAT as per treatments. Gap filling was done to maintain optimum plant population. Hand weeding was taken up at 20 and 40 DAT. All the crop observations were recorded adopting standard procedure. The experimental data on growth, yield and yield parameters are subjected to analysis by using Fisher’s method of analysis of variance as outlined by Panse and Sukhatme (1985).

Effect of spacing on growth and yield of little millet

Plant height is an important component which helps in the determination of growth. The results showed that plant height significantly deferred with different plant geometries. Maximum plant height (96.5 cm) was recorded at a spacing of 25 cm x 25 cm (Table 1). This might be optimum spacing for little millet in transplanted condition. Wider spacing reduces the competition between plants, increases the interception of solar radiation and photosynthesis helps in vigorous growth of transplanted little millet. Optimum planting pattern is the pre-requisite for proper utilization of growth resources and ultimately to exploit the potential productivity of any crop. These results are corroborate with the findings of Kalaraju (2011) and Vijay Aravith (2019). Number of tillers was significantly influenced by the different planting geometries. More number of tillers per plant was produced when the seedlings transplanted at a spacing of 25 cm x 25 cm, this might may be optimum plant population for better utilization of available moisture and nutrients for producing more number of tillers per plant. Similar results were also reported by Kewat et al. (2002), The dry matter accumulation is the result of all the growth and yield attributes namely plant height, number of tillers per plant number of leaves per plant leaf area etc. Higher dry matter accumulation was recorded when seedlings transplanted at a spacing of 25 cm x 25 cm due to congenial microclimate for effective utilization of resources for growth and yield attributes and thereby more accumulation of dry matter was recorded compared to other plant geometries. Days to 50 per cent flowering and maturity were not significantly influenced by the different geometries. Higher grain yield was recorded with transplanting of seedlings at 25 cm x 25 cm, probably because the treatment expressed more effective tillers per plant with lengthy panicles resulting in higher grain yield. The higher grain yield may be due to enhanced stature of yield attributes, thus forming larger sink size coupled with efficient translocation of photosynthates to the sink which was noticed under optimum planting pattern. These results corroborate with the finding of Kalaraju et al.( 2011). The increase in straw yield was probably due to adoption of planting geometry with optimum spacing and uniform stand which enhanced higher dry matter accumulation might be enhanced straw yield of little millet. These results corroborate with the finding s of Veeranna and Reddy (2010).

Effect fertilizer levels on growth and yield of little millet

Application of 40:40:20 kg NPK ha-1 resulted lengthy plants with higher number of tillers compared to recommended levels of NPK fertilizers (20:20:20 kg NPK ha-1) and further increase in NPK levels (60:40:20 kg NPK ha-1) did not perform better (Table 2). This may provide sufficient nutrients to plant which leads to anatomical changes for taller plants and also promotes growth and development of auxiliary bud from which tillers emerged. Similar results were also reported by Pradhan et al., (2011), Raundal and Patilvidya (2017). The dry matter production (g plant-1) was significantly higher with application of 40:40:20 kg NPK ha-1 which was at par with the application of 60:40:20 kg NPK ha-1. This might be due to better availability of nutrients. Similar results were also reported by the Sunitha et al. (2004), Deshmukh (2007) Shankar et al. (2018). Days to 50 per cent flowering and maturity were not significantly influenced by the fertilizer levels. The length of the panicles as well as grain and straw yield were significantly influenced by the fertilizer levels. Application of 40:40:20 kg NPK ha1 resulted the longest panicles and higher grain yield of little millet due to better source sink relationship and high physiological activities which may reflect in higher grain and straw yield. These results are in accordance with Raundal and Patilvidya (2017) and Shankar et al., (2018).

The experimental results revealed that transplanting of seedlings at a spacing of 25 cm × 25 cm and application of 40:40:20 kg of NPK ha-1 was found to be optimum for obtaining higher grain yield on sandy loam soils of southern agroclimatic zone of Andhra Pradesh.