EFFECT OF PLANT GROWTH-PROMOTING STREPTOMYCES SP. ON PLANT GROWTH AND YIELD OF TOMATO AND CHILLI

The family Solanaceae contains many vegetable species having great economic importance in agriculture. Tomato and chilli are the two most important vegetable crops in this family that are rich in essential nutrient and antioxidants . Plant growthpromoting rhizobacteria (PGPR) are widely reported to have beneficial effect on crop plants as they colonize on roots and accelerate plant growth by many ways. Ten strains of Streptomyces sp. viz. CAI-17, CAI-24, CAI-26, CAI-78, CAI-121,CAI127, KAI-26, KAI-27, KAI-32 and MMA-32 were reported earlier by ICRISAT microbiologist group, to have plant growthpromoting (PGP) potential in rice, sorghum and chickpea; biocontrol potential against charcoal rot in sorghum and Fusarium wilt in chickpea. In the present investigation, the above ten strains were further evaluated for their PGP effect on growth and yield of tomato and chilli under field conditions. All the tested strains significantly enhanced growth parameters including plant height, number of branches and yield over the un-inoculated control. Among the ten strains, CAI-17, CAI-24 and KAI-32 were found to significantly enhance the yield of tomato while CAI-24, CAI-26 and KAI-32 strains significantly enhanced the yield of chilli over the un-inoculated control. Consortia of all ten strains also significantly enhanced the yield of chilli but not tomato. It is concluded that the selected strains of Streptomyces can be exploited for the growth promotion of tomato and chilli.

Tomato (Solanum lycopersicum L.) and chilli (Capsicum annuum L.) are the two most important vegetable crops belonging to the family Solanaceae. Tomato is a protective food because its nutrition value, and anti-oxidant properties. Tomato is the third largest grown and consumed vegetable crop in the world after potato and sweat potato. In India, the total area under tomato was 809 (000 ha), production 19697 (000mt) and productivity 24.2 (mt/ha) (Horticultural statistics at a Glance, 2017). Chilli is an important commercial vegetable crop as well as spices throughout the world. The crop is a rich sources of Vitamin A, B, C and K (Simonne et al., 1997) and it has seven times more vitamin C then orange (Shreya et al., 2014). The area and production of chilli in India was 287 (000 ha) and 3406 (000mt) (Horticultural Statistics at a Glance, 2017). Both crops are severally damaged by many insect pests, fungal and bacterial pathogens leading to huge economic losses to the farmers. The biotic stresses are normally managed by the usage of insect pest and disease resistant varieties (Witek et al., 2016), crop rotation and application of chemical pesticides (Srivastava and Sharma, 2014).

However this options are expensive and also many a times not successful. Further, the excessive use of chemical pesticides have serious environmental and health concerns and have detrimental impact on terrestrial and aquatic ecosystems. In order to overcome these potential problems, the usages of plant growth-promoting rhizobacteria (PGPR) are widely used as these are inexpensive and equally effective (Zaidi et al., 2015).

PGPR are known to colonize the rhizosphere and rhizoplane of the host plants and enhance the plant growth by direct (by production of growth hormones such as indole acetic acid [IAA], fixation of nitrogen and uptake of nutrients) and/or indirect (by systemic resistance and production of siderophore, hydrocyanic acid, lytic enzymes, antibiotics and lipopeptides) mechanisms. PGPR such as Rhizobium, Pseudomonas, Bacillus and Streptomyces were reported widely to help the plants not only by mobilizing the nutrients but also by controlling plant pathogens and insect pests (Gopalakrishnan et al., 2011a, b; Hariprasad, 2016).

Streptomyces are Gram-positive bacteria belonging to the order Actinomycetales and family Streptomycetaceae (Kämpfer, 2007). These are aerobic, filamentous and spore-forming bacteria. Streptomyces are mostly saprophytes and colonize on the rhizosphere and rhizoplane of the plant roots (Vurukonda et al., 2018). Streptomyces represent an excellent alternative for improving nutrient availability to crop plants and promoting innovation and sustainability in agricultural systems. These attributes may be due to features such as quorum sensing, controlled gene expression, multiplication rate, antibiotics, siderophore, cellulase, phytohormones, amino acid synthesis, chitinase, lipase, â-1, 3-glucanase and ACC-deaminase production. Streptomyces–plant interactions can be divided into biofertilization, bio-stimulation, and bio-protection (Hamdali et al., 2008; Sadeghi et al., 2012; Jog et al., 2014). Streptomyces are widely reported as biocontrol agent against phytopathogens and insect pest (Hariprasad, 2016) and for instance, management of Fusarium wilt in chickpea (Gopalakrishnan et al., 2011b, Anusha et al., 2019); Botrytis graymold (BGM) disease in chickpea (Vijayabharathi et al., 2018a, b) and dry root rot of chickpea (Gindi et al., 2018). Streptomyces have also been reported as plant growth promoter in various crops and increase the yield in rice, sorghum and chickpea (Gopalakrishnan et al., 2012, 2013a, b; 2015a, b, c), beans (Nassar et al., 2003), peas (Tokala et al., 2002) and vegetables such as tomato (El-Tarabily, 2008). In the present investigation, a total of ten Streptomyces strains (CAI-17, CAI-24, CAI-26, CAI-78, CAI-121, CAI-127, KAI-26, KAI-27, KAI-32 and MMA-32; previously reported as PGPR in rice, chickpea and sorghum) and their consortia were further evaluated for their PGP activity in tomato and chilli under field conditions.

Evaluation of Streptomyces sp. for their PGP potential in tomato and chilli under field conditions

The field evaluation trail was conducted during the post rainy season of 2016-17 at ICRISAT, Patancheru (17°302 N; 78°162 E; altitude 549 m) in peninsular India. Soils at the experiment site are Vertisols containing 52 per cent clay, 21 per cent silt and 26 per cent sand with pH of 7.7-8.5. The soil depth of the field used was 1.2m and this soil retained approximately 200 mm of plantavailable water in a 120-cm soil profile. The fields were prepared into broad bed and furrows with beds 1.2 m wide flanked by 0.3-m furrows. Nitrogen (18 kg N ha-1) and phosphorous (20 kg P ha-1) as di-ammonium phosphate (DAP) were incorporated into the soil by surface application. A total of 12 treatments were made consisting of ten Streptomyces strains, one consortia (of all the ten strains) and one un-inoculated control. The experiment was laid out in a randomized complete block design (RCBD) with three replicates and individual plot size was 1.5 m × 2 m with a plant to plant and row to row spacing of 30 cm × 60 cm, respectively accommodating 35 plants per plot. In between the plots irrigation and drainage channels were made alternatively.

The ten test strains of Streptomyces were inoculated on starch casein broth (SCB) and incubated at rotary shaker for five days. Tomato (cultivar- Rhisika) and chilli (cultivar-HMC150) seeds were sown in small nursery pots and 15 days after sowing (DAS), seedlings were soaked with Streptomyces culture (108cfu/ml) for 30mins. The seedlings were transplanted at 4-5 cm depth. Booster dose of Streptomyces was applied on every 15 days by soil drenching method until the flowering stage. Control plots were maintained without application of Streptomyces strains. The plots were irrigated once in 7 to 10 days. The crop was kept weed free by manual weeding. No serious insect pest or phytopathogens attacks were observed during the cropping period. Ten plants of each plot were randomly selected for recording observations in each replication. Once the crop reached the fruiting stage, fruits were plucked once in 7 days. Data recorded include plant height, number of branches, number of fruits and weight of fruits for both tomato and chilli.

The field experiment data were subjected to ANOVA (GenStat 10.1 version 2007, Lawes Agricultural Trust, Rothamsted Experimental Station) to evaluate the efficiency of the ten PGP Streptomyces strains. Significance of differences between the treatment means were tested at p = 0.01 and 0.05.

In tomato, the Streptomyces strains enhanced PGP traits including the plant height (up to 18%), shoot weight (up to 41%) and fruit yield (up to 57%), which was attributed by only three strains viz., CAI-17, CAI-24 and KAI-32, that were found to significantly enhance fruit yield over the un-inoculated control. Consortia (of all the ten Streptomyces strains) also enhanced tomato plant height, shoot weight and fruit yield over the un-inoculated control but significant result was found in only one PGP trait i.e. plant height (Table 1).

Streptomyces sp. are widely reported to play an important role in growth promotion of many agriculturally important crops including cereals (such as rice, sorghum and wheat), pulses (such as chickpea, pigeonpea and green gram) and vegetable crops. Streptomyces are also reported to produce secondary metabolites of commercial interest. PGP Streptomyces are reported to produce 60per cent biologically active compounds in agriculture such as antifungal, antibacterial and PGP substances (Suzuki et al., 2000; Ilic et al., 2007; Khamna et al., 2009). Therefore, in the present study, we had selected ten strains of Streptomyces, previously reported to have PGP traits in rice, chickpea and sorghum, for evaluating their growth promotion traits in tomato and chilli.

The ten Streptomyces strains studied in this study were earlier reported to produce Indole acetic acid, siderophore, hydrocyanic acid and â-1, 3-glucanase and lytic enzymes such as chitinase, cellulase, lipase and protease (Gopalakrishnan et al., 2011a, 2011b, 2012a, 2012b). Further, all these strains were also reported to enhance PGP traits in rice, chickpea and sorghum under field conditions (Gopalakrishnan et al., 2013a & b, 2015) and biocontrol traits against charcoal rot in sorghum and Fusarium wilt in chickpea (Gopalakrishnan et al., 2011a, 2011b). Hence, it can be concluded that the ten Streptomyces strains can be exploited for their PGP potential not only in cereals and legumes but also in vegetable crops such as tomato and chilli.

The ten Streptomyces strains used in this study are apparently well adapted not only to the chickpea, rice and sorghum rhizospheres, as reported earlier, but also to the tomato and chilli rhizosphere, as demonstrated in the current investigation. However, there is a need to determine the effectiveness of these strains under multilocation trials to understand the nature of their interaction with other native soil microflora and with other host plants and the environment. Further, the ten Streptomyces strains contains a broad range of PGP abilities and demonstrate multiple beneficial actions. Therefore, the selected test strains used in this investigation are potential candidates for the discovery of secondary metabolites of commercial interest and their usefulness in host plant resistance against a range of pathogens and insect pests. 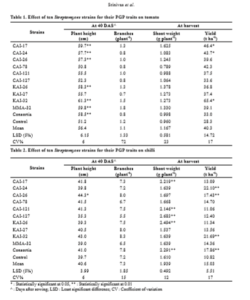 Gopalakrishnan, S., Srinivas, V., Vidya, M.S and Rathore, A. 2013a. Plant growth-promoting activities of Streptomyces spp. in sorghum and rice. Springer Plus. 2: 1–8.

Gopalakrishnan, S., Srinivas, V., Shravya, A., Prakash, B., Vijayabharathi, R., Ratnakumari, B and Rupela, O. 2013b. Evaluation of Streptomyces spp. for their plant-growth promotion traits in rice. Canadian Journal of Microbiology. 50: 534–539.