The effect of short term natural high temperatures above 35oC and drought in the range of – 50 to – 70 kPa was assessed on grain quality parameters in three rice cultivars (ADT 43, TKM 9 and N 22). Drought stress coupled with natural high temperature was imposed at two critical phenophases i.e., at panicle initiation (PI) and anthesis stages under rain out shelter facility. Rice quality is determined both genetically and environmentally where, heat and drought stress caused reduction in quality characters like, Head Rice Recovery (HRR) and amylose content. The HRR was reduced when it is subjected to combined heat and drought stress whereas, broken rice was significantly increased. N 22 produced the grains with high amylose content whereas, susceptible genotype ADT 43 recorded lowest amylose content.

Heat stress combined with drought, is one of the major limitations to food production worldwide. As the world population continues to grow, and water resources for the crop production decline and temperature increases, the development of heat and drought tolerant cultivars is an issue of global concern. Nearly half of the world’s population depends on rice and an increase in rice production by 0.6 – 0.9 per cent annually until 2050 is needed to meet the demand (Carriger and Vallee, 2007). As a result, rice (Oryza sativa L.) is increasingly cultivated in more marginal environments that experience warmer temperatures where day/night temperatures average 28/ 22°C (Prasad et al., 2006). In these environments, day temperatures frequently exceed the critical temperature of 33°C for seed set, resulting in spikelet sterility and reduced yield. Hence, in the future, rice will be grown in much warmer with a greater likelihood of high temperatures coinciding with heat sensitive processes during the reproductive stage.

Although rice has been used as a model plant for many years, the responses of rice genotypes to combined high temperature and drought is still poorly understood. Rice responses to high temperature differ according to the developmental stage, with the highest sensitivity recorded at the reproductive stage. Temperatures more than 35°C at anthesis and lasting for more than one hour can lead to high sterility in rice (Jagadish et al., 2007). High temperature stress induced increase in spikelet sterility was attributed to abnormal anther dehiscence, impaired pollination and pollen germination (Jagadish et al., 2010). Moreover, high temperature of 39 0C given a day before flowering resulted in poor anther dehiscence during subsequent anthesis.

Impacts of climate change demands adjustments in our rice production methods and development of new rice strains that can withstand higher temperatures, growing multiple stress tolerant varieties that can integrate in future climate change situations. The simultaneous occurrence of multiple abiotic stresses rather than one particular stress is commonly noticed under field conditions (Mittler, 2006). The combination of high temperature and water stress represents an excellent example of multiple abiotic stresses occurring concomitantly in the field. But, relatively little information is available with reference to combined high temperature and water stress in general and at the most sensitive flowering stage in particular in rice. Experiments were therefore carried out with the objective to study the grain quality aspects of rice genotypes under combined heat and drought stress.

Three rice (Oryza sativa L.) genotypes namely ADT43, TKM9 and Nagina 22 (N22) which are differed in their tolerance behaviour to heat and drought stress but had similar phenology were taken for the study.

Two trials were conducted (Trial – I: January, 2013 to May, 2013; Trial – II: June, 2013 – October, 2013). The time of sowing in the selected genotypes were staggered such that their PI and anthesis stages coincided the natural high temperature around early April for panicle initiation stage stress and May to June for anthesis stage stress. Temperature for the entire experiment period was monitored by installing the log stick data logger (Model. LS350-TH Japan) and an automated weather station inside the ROS and control area. Drought stress treatments were administrated and monitored by measuring the soil water potential using the tensiometers installed at 30cm depth in each plot. Water was completely withheld for 2 weeks during the stress period. Plants were re-watered when the tensiometers registered soil water tension of 50 to -70kpa.

Desired amount of paddy is taken (minimum hundred grams) and subjected to dehusking in a standard dehusker. After cleaning, the dehusked kernels (brown rice) are weighed and hulling percentage is determined 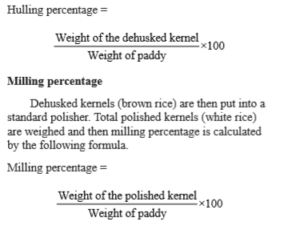 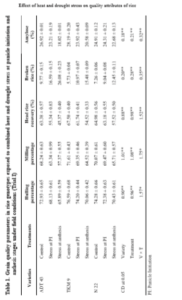 The simplified procedure of Juliano (1971) detailed as under was used for estimation of AC. Twenty whole milled rice kernels were ground in an Udy cyclone mill (sieve mesh size 60), 100 mg of rice powder taken in a 100 mL volumetric flask was added with 1ml of 95% ethanol and 9 ml of 1 M NaOH. The content was heated over a boiling water bath to gelatinize the starch. After cooling for one hour distilled water was added and the contents were thoroughly mixed. For each set of samples run, standard varieties with low, intermediate and high amylose were included to serve as checks. 5 ml of the starch solution was taken in a 100 ml volumetric flask. One ml of 1 M acetic acid and 2 ml of iodine solution (0.2 g iodine and 2.0 g potassium iodide in 100 ml aqueous solution) were added and the volume was made up with distilled water. The contents were shaken well and left to stand still for 20 min. Absorbance of the solution was measured at 620 nm with a spectrophotometer. The AC was determined by using a conversion factor and the results were expressed on a dry weight basis. Moisture content of the samples was not determined as the relative humidity and temperature of the laboratory was controlled. For making standard curve, 40 mg of potato amylose (Sigma Chemical Co. or Stein Hall Co., Inc.) of known moisture content was wetted with 1 ml of ethanol and 9 ml of 1 M NaOH, heated for 5-10 minutes over a boiling water bath, cooled, and made up to100 ml with distilled water. Solution (1, 2, 3, 4, 5 ml) was placed with a pipette in 100 ml volumetric flasks. The solution was acidified with 1 M acetic acid (0.2, 0.4, 0.6, 0.8, and 1.0 ml respectively) and treated as above. The absorbance values were plotted at 620 nm against the concentration of anhydrous amylose (mg) and the conversion factor was determined. The dilution factor of 20 for the samples was included in the conversion factor.

Factorial Randomized Block Design (FRBD) analysis was carried out on various parameters as per the procedure suggested by Gomez and Gomez (1984). Wherever the treatment differences are found significant, critical differences were worked out at five per cent probability level and the values with respective standard errors of means are furnished. Correlation analysis was carried out by using SPSS (Statistical Package for Social Sciences) soft ware.

Hulling percentage was found to be decreasing under combined heat and drought stress. A significant difference was observed among the genotypes and treatments. Both the trial data showed that plants exposed to stresses during anthesis were most affected and recorded less hulling per cent. During the first trial (trial I), ADT 43 has recorded low hulling values (68.13 and 65.89) and TKM 9 recorded the highest (74.20 and 70.6) hulling values when it is exposed to stress at PI and anthesis stages. Similar trend was followed during second trial (trial II), where ADT 43 recorded 69.85 and 66.89 at Pi and anthesis stages respectively and TKM 9 recorded the highest value (72.90) when exposed to stress at PI. While, the genotype N 22 recorded the highest (70.08) at anthesis. Rice quality is determined by both genetically and environmentally where, heat and drought stress causes reduction in yield and quality of rice (Pandey et al., 2014). Heat and drought stress promotes the remobilization of stored carbon reserves and stress during grain filling enhances plant senescence and accelerated grain filling thereby reduces grain quality.

The recovery of milled rice after polishing was higher in control over the stress treatments. During trial I, higher milling recovery percentage was observed in N 22 (69.47 and 65.71) and ADT 43 has recorded the least (63.36 and 57.37) at PI and anthesis stresses. Similarly, during trial II the genotype ADT 43 has shown the least (64.18 and 60.68) and the genotype N 22 recorded the highest values (68.90 and 66.06) at PI and anthesis stresses. Both the trial data showed that plants exposed to stress during anthesis were most affected. The quantity of total milled rice and percentage head rice that can be produced from a unit of rough rice determine the milling quality. Shrivastava et al. (2012) reported 11.0 % reduction in milling percentage when it is exposed to heat and drought stress at flowering.

The head rice recovery also followed a similar pattern of milling recovery. Combined effect of heat and drought had a significant influence on HRR. In both the trials stress imposed during the anthesis showed reduced recovery percentage. ADT 43 showed a low HRR of 55.34 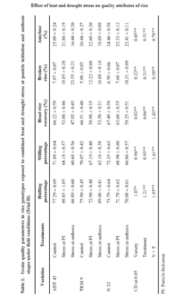 Rice quality is determined both genetically and environmentally where, heat and drought stress causes reduction in yield and quality of rice. Variety ADT 43 recorded lowest and TKM 9 recorded highest hulling percentage whereas, N 22 produced the grains with high amylose content whereas, susceptible genotype ADT 43 recorded lowest amylose content. The genotype N 22 has emerged as an ideal donor with superior grain quality for the future breeding programme to develop heat and drought stress tolerance in rice.