The spotted pod borer Maruca vitrata (Geyer) is one of the most important insect pest of grain legumes in tropical and sub-tropical countries including India. It is a serious pest of pigeonpea (Sharma, 1999; Randhawa, 2013); field bean, cowpea, mung bean and urd bean (Chandrayudu et al., 2006; Halder and Srinivasan, 2007).

While evaluating greengram and blackgram varieties for plant resistance to M. vitrata, at the Dept. of Entomology, S V Agricultural College, Tirupati, we have noticed cannibalism of mature Maruca larvae (Fig. 1) not only among the larval instars (Soundararajan and Chitra, 2014) but also on pupae, which has not been reported earlier. The per cent cannibalism on larvae was 30 to 50 (Table 1).

To overcome this cannibalism, we have established a method for continuous rearing of M. vitrata on natural diet as detailed below:.

Cannibalism was not observed in these instars. 1st instars immediately after hatching from eggs were transferred in a batch of 2-3 and were placed in multi-cell wellplates with redgram flowers as food material. The larval duration of both 1st and 2nd instar lasted for 60 to 72 hours (2.5 to 3 days). Fresh flowers were provided as and when required without disturbing the feeding activity and larvae.

Cannibalism was observed from 3rd instar and continued up to 5th instar.

The instar duration was around 90 – 100 hours for both the instars. As the cannibalism started from 3rd instar onwards, the larvae were carefully separated with a camel brush and reared individually in multi-cell well plates with pods of redgram or fieldbean as food material.

The larvae made webbings of the food material and fed within the webbings. The food material was replenished as and when needed during which the multicell well plates were cleaned with absolute alcohol to prevent fungal contamination. The same procedure was followed for rearing 4th instar larvae where the instar duration was around 90- 100 hrs.

The duration of 5th instar was 65 to 72 hrs. The larvae in 5th instar were generally light bluish green in color. The pre pupal period lasted for about 20-24 hrs. Larvae during pre- pupal period were not disturbed to avoid any chances of mortality during handling.

Pupation was observed within webbing. The freshly formed pupa were light brownish in color with green tinge and after 12 hrs the color changed to complete brown. Once the pupae turn brownish, they were separated and placed in oviposition cages for adult emergence and egg laying. The pupal period was around 96-120 hrs.

The pupae were kept in a Petri plate of 9 cm diameter and placed in the oviposition cage with redgram flowers as substrate. Diluted honey (5%) was provided as food material for the adults. The flowers were changed every day and observed for the eggs deposited.

Rearing of early instars i.e. 1st and 2nd with flower buds of redgram or fieldbean, followed by individual rearing of larvae i.e. 3rd, 4th, and 5th larvae and segregation of larvae and pupae was suggested as the best method for continuous rearing of M. vitrata larvae successfully without cannibalism (Fig. 2). 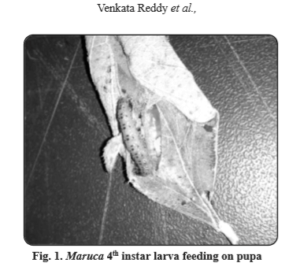 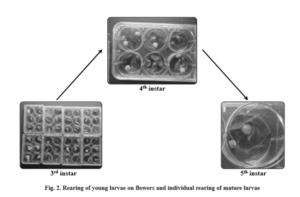 A method of continuous rearing of Maruca vitrata on natural diet