Supply Chain Analysis of Maize in Rangareddy District of Telangana

for the present study from which sixty farmers and ten market intermediaries were polled to discover more about the maize supply chain’s existing routes and their effectiveness for marketing. There were four significant supply chain pathways in the study area. 46.67 per cent of the farmers have chosen supply chain I among the four supply chains. Channel I has the lowest marketing expense per quintal of maize among the four marketing channels, followed by Channel II, Channel III, and Channel IV. The marketing expenses per quintal of maize sold through the above channels were 100.20, 128.04, 231.27 and 259.11 rupees respectively. Acharya’s method suggested that channel I (15.21) was efficient than channel II (11.47), channel III (5.38), and channel IV (4.77).

Maize is one of the world’s most adaptable crop. It is grown in the tropics, subtropics, and temperate regions up to 500 to 4000 meters above sea level in all semi-arid, irrigated conditions. Maize has a broad range of applications due to its global distribution and lower price. It is used not only for direct human consumption, industrially processed food and livestock feed but also in non-food industrial items such as starches, acids, and alcohols. Recently been a renewed interest in using maize to make ethanol as a substitute for petroleum- based fuels.

In India, maize crop is grown in a wide range of 9200 ha with a yield of 27200 MT (FAOSTAT, 2020). With 3730 MT, Karnataka produces the most maize, followed by Madhya Pradesh and Bihar. The most productive state is Tamil Nadu, with Andhra Pradesh and West Bengal following closely behind it (6551 kg ha-1).The foremost crop produced in Telangana is maize (corn), which is grown on roughly 14 lakh acres and yields 16 lakh tonnes yearly. Siddipet, Nagarkurnool, Rangareddy, Vikarabad, Mehaboobnagar, Kamareddy, Nizamabad, Karimnagar, and Jagtial are notable districts in Telangana for producing maize, responsible for about 85 per cent of the state’s total production.

An efficient network of agricultural marketing system is a vital link between farmers and consumers (Jaisridhar et al., 2012). Net price received by the farmers depends on the efficiency of the marketing channel. Hence, the present study was undertaken with the objectives of understanding the existing marketing channels of maize, price spread of maize and examine the efficiency of various supply chains in the study area.

Area under maize cultivation is being increasing for the past decade due to increase in its usage as poultry feed in Rangareddy district of Telangana and hence, Rangareddy district was purposely selected for the study. Two mandals namely Nandigama and Kothur from Rangareddy district where maize was majorly grown were chosen for the study. Appareddyguda, Cheguru, Majid Mamidpally villages from Nandigama mandal and Kodicherla, Penjerla, Manchanpadu villages from Kothur mandal were selected randomly for the study. Ten farmers from each village were selected randomly, thus the total sample size of farmers constitutes 60 farmers. The primary data was collected from farmers through personal interview method by using a schedule. The primary data pertain to the year 2020-2021. Descriptive analysis in this study was performed by employing tabular analysis technique. The producer’s price is the net price received by the farmer at the time of first sale. This is equal to the wholesale price at the primary assembling center, minus the charges borne by the framers in selling.

PA= is the price received by the farmer

channels can be measured by using three methods.

Efficiency of any activity or process is defined as the ratio of output to input. If ‘O’ and ‘I’ are respectively output and input of the marketing system and ‘E’ is the index of marketing efficiency, then

A higher value of E denotes higher level of efficiency and vice versa. When applied in the area of marketing, output is the ‘value added’ by the marketing system and ‘input is the real cost of marketing (including some fair margins of intermediaries)’

Shepherd suggested that the ratio of the total value of goods marketed to the marketing cost may be used as a measure of marketing efficiency. The higher the ratio, the higher efficiency and vice versa. This method eliminates the problem of measurement of value added.

The concurrent margin has been estimated, as it is the difference between the prices prevailing at successive stages of marketing at a given point of time, e.g., the difference between farmers’s selling price and retail price on a specific date is the total concurrent margin. To study the existing marketing system, marketing margins and cost for different channels in the selected markets and the price spread was estimated by using the following formulae.

C     = Total cost of marketing of the commodity

produce leaves the farm till he sells it

Cmn = Cost incurred by the nth middlemen in the process of buying and selling the produce.

The socio-economic characteristics of the respondents reveal understanding of the sample’s age, literacy level, landholding, and experience of the farmers as well as other supply chain stakeholders. 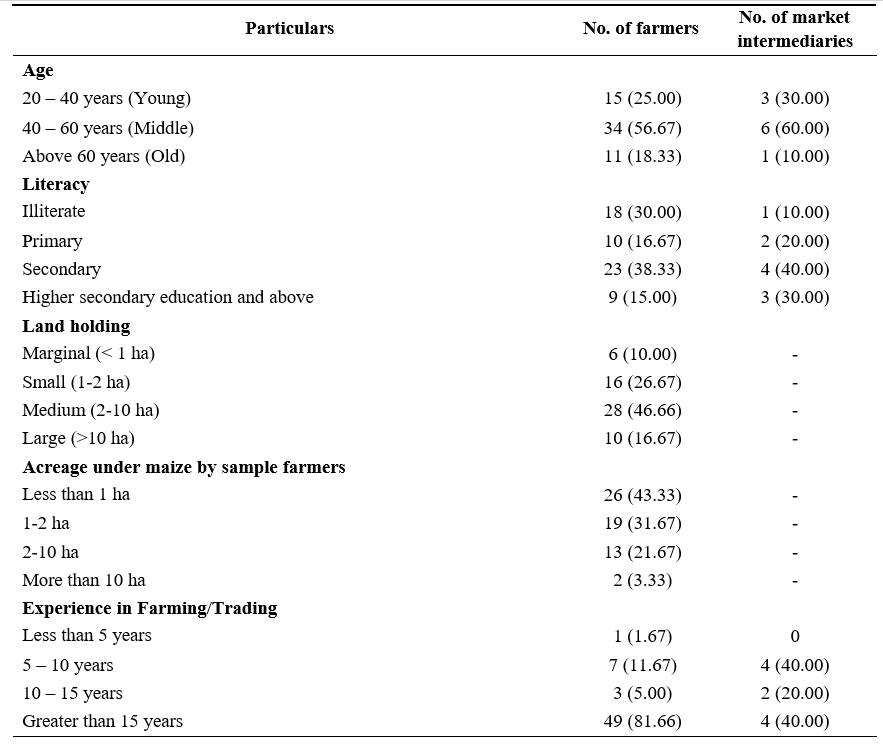 Existing supply chains of maize in the study area

Four supply chain channels of maize were identified in Rangareddy district of Telangana State. The identified channels were

Among the four channels enlisted above, channel I was the shortest channel. As there were no intermediaries in the channel, this channel stood as most efficient among all the channels. When the producer was unable to sell the produce directly to the end customer i.e., hatcheries, then he took the help of commission agents in the village.

Table 2. Number and Percentage of sample farmers following each channel

Marketing cost and margin of maize at producer level was varied according to selected market, method of sale, quantity of marketed surplus, distance from production point to market and type of storage materials (Srikanth et al., 2017).

Table 4. Price spread in Supply chain of Maize (per quintal)

not suggestive if maximization of farmers share is the objective.

From the results above, it was concluded that channel I was more efficient than the other marketing channels as the farmers are directly selling their produce to hatcheries. Most of the farmers who are having good quality of produce and not depending on market intermediaries for capital requirement were selling their produce directly to hatcheries. Those farmers who were depending on marketing intermediaries for their capital requirement for raising the maize crop were approaching marketing channels II, III, and IV. Kumar and Chahal (2011) also observed the highest marketing efficiency in the channel where no market intermediaries involved.

Transportation places a very important role in marketing of maize, a well developed transportation system reduces the transportation cost and increases the efficiency of the marketing system. Credit facilities should be made available to the farmers so that their dependency on market intermediaries can be reduced. Establishing Farmers Producers Organizations can eliminate the involvement of market intermediaries, and increases the price received by the farmers.

FAOSTAT. 2020. Food and Agriculture Organization of the United Nations. https://www.fao.org.