Since the implementation of the programme in India,
14.61 crore job cards were issued, 3102.7 crore person days were generated till 2019-20 with the total expenditure of Rs. 619716.29 crore. The total number of active workers were 14.01 crore. Total person days generated were 268.24 crore, average days of employment provided per household were 41 with the average wage rate given per day per person was Rs. 200 for the year 2019-20. (www.nrega.nic.in) The current scenario of AP- MGNREGA is that the total number of job cards issued were 6397284 till 2019-20. Over all 6514235 individuals were provided with employment in the year 2019-20 with the generation of 200792978 person days of employment. The average wage rate per day per person was Rs. 203 which is more than the national average of 200 and the average number of days employment provided per household was 50. (www.nrega.ap.gov.in, 2020). Since the performance of the AP-MGNREGA is much better in terms of wage rate earned, (Srinivas and Pandyaraj, 2017) this study was initiated to assess the progress and performance of MGNREGA in the study area.

The list of all 66 mandals of Chittoor district, was prepared and four mandals viz., Pulicherla, Rompicherla, Chinnagottigollu and Vadamalapeta were selected for the present study based on the highest average number of mandays. All the villages in selected mandals were listed out and two villages from each selected mandals were selected based on the criterion of highest number man days thus the total sample villages to eight. The selected villages were Pathapeta, Devalampet, Bandakindapalle, Ganugachintha, Kotabylu, Thippiredddygaripalle, Appalayagunta, Lakshmammakandriga. All the farmers in selected villages were listed out. From each village, 10 wage seekers of MGNREGA were selected at random. Thus, the total sample constitutes 80 respondents.

Estimation of compound growth rate
Growth of any variable indicates it past performance. The analysis of growth is usually used in economic studies to find out the trend of a particular variable over a period of time. It clearly indicates the performance of the variable under consideration and hence it can be very well used for making policy decisions.
The growth rate was estimated using the exponential growth function of the form
Y = a*btut
where,
Y = Dependent variable for which growth rate was estimated
a = intercept
b = regression coefficient t = time variable
u = disturbance term
The compound growth rate
r = (b-1) *100

PROGRESS AND PERFORMANCE OF MGNREGA

To assess the progress and performance of MGNREGA, the employment generated to different categories of people, work completion rate and financial performance of the programme in the study area is undertaken.

From the table, it is observed that the number of person days generated were increased from the year 2006-07 to 2018-19. The same is also observed with all the sectors. When the compound annual growth rate was calculated it is observed that there is a positive growth rate with total person days generated (0.72), others (1.80) and women (0.79). The share of SC people is 31.54 and for ST people is 4.16 per cent as the programme is also aimed to achieve strong social net for the vulnerable groups. The employment share for women is 58.35 per cent, equal and non-discriminatory wages to both men and women, no need of special knowledge, work timings and work within 5 kms helped women to participate in the work more actively than men. More participation of women was also confirmed by Gulzar et al. (2016). There was a negative growth rate with SC (-1.22) and ST (-1.48). Similar results were observed in the study of Ranjithumar (2018).

Works undertaken and their completion rate under MGNREGA

From the Table 2 and Fig. 2, it is observed that the number of works undertaken is showing a positive growth of 12.23 as the works undertaken by MGNREGA for each year were increasing for creation of assets. And the number of works in progress were increased and the number of works completed also showing a positive growth of 9.8 whereas the work completion rate is showing a negative growth of -2.15 and it is only 76.14 and 67.50 per cent work completion rate for the years 2017-18 and 2018-19 which is showing under capability of MGNREGA programme to develop into an asset creation programme. Due to the slack attitude of both workers and officials towards the programme, there was less work completion rate in the study area. The results were in conformity with the study of Ranjan (2016).

The same trend was observed at A.P state and all India level. 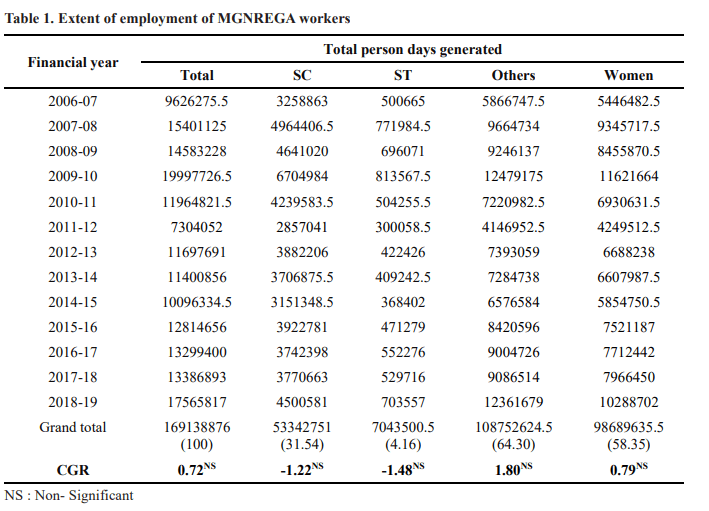 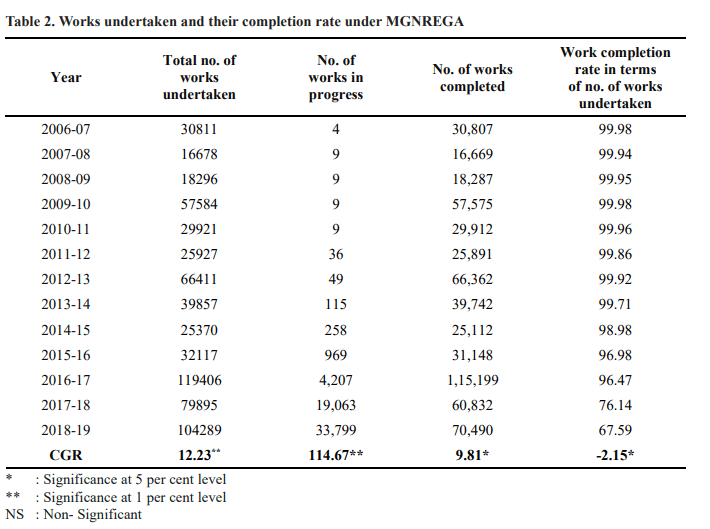 Growth rates of person days generated through MGNREGA in the study area for total beneficiaries and women were positive. But for SC and ST people it was negative. Growth rates of total number of works undertaken, number of works in progress and number of works completed were highly positive. But the work completion rate was in decreasing order. It can be concluded that, the programme is showing an over all good performance in the study area except for the focus on work completion through the programme. In addition to creating medium term assets, long term asset creation and completion might be the need of the hour.

Gulzar, F and Fayaz, A. 2016. Rural Women Emancipation through MGNREGA. Advances in Economics and Business Management. 1: 110-114.