Study on Export Competitiveness of Onion From India

India is the second largest onion growing country in the world. Globally, the demand for Indian onion is increasing day by day. Fresh onions occupy first place in exports from India under fresh fruits and vegetables category with 11.50 million tonnes exports worth of 2,320.70 crores during the year 2019-20. Export competitiveness was estimated by calculating the Nominal protection coefficients (NPC) using secondary data for a period from 2017 to 2019. The results revealed that onion exports to Bangladesh have moderate competitive advantage during the study period.

Agriculture sector occupies an important role in development of India economy. India is currently ranked tenth amongst the major exporters globally as per WTO trade data for 2019. India’s share in global exports of agriculture products has increased from 1.7 per cent a few years ago, to 2.1 per cent in 2019.

Production and trade of agricultural commodities are crucial to the economic progress of the developing countries like India since agriculture continues to be the predominant livelihood source for large share of its population. Because of globalization the economic reforms came into existence and international boundaries open up for our country for providing opportunity for sale. India is a traditional exporter of fresh onion. Immediately after Independence in 1947, in 1951-52 the country was exporting over 5,000 tones of onion per year. Exports of onion started expanding rapidly during the ’60s. There are, however, apparent wide fluctuations in exports from year to year. India has experienced robust growth in export of fresh and processed agricultural products over the last decade. Amongst the fresh fruits and vegetables exported by India, fresh onion fetching the highest export revenue. This underlines the importance of onion in India’s export exchequer.

Onion is mainly grown in Asia, Africa and north America and the major onion producing countries were China, India and United states of America. In 2019, the global area under onion was reported by FAO to be 6.32 million hectares, with a production of 99.52 million tonnes. India ranks first in the world accounting for the world area, planted to onion. Globally, the country occupies the second position, after China, in onion production with a production share of 22.83 per cent. In this context the present study was made to estimate the growth rate of onion exports from India and export competitiveness of onion from India.

To study the growth rates of the onion exports from India, quantity and value of the exports for a period of 25 years i.e. from 1995-96 to 2019-20 were collected from (APEDA) Agricultural and Processed Food Products Export Development Authority. Growth of any economic variable signifies its past performance. Growth in quantity and value of onion exports were analysed by using the exponential growth function of the following form, 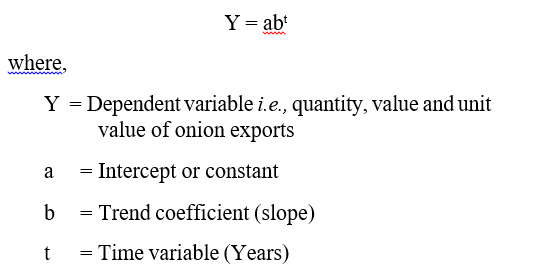 The function takes the form of a linear equation in a logarithmic and becomes log-linear as shown below:

Where ‘Ln Y’ is natural logarithm of Y, ‘Ln a’ and ‘Ln b’ are similarly defined.

The compound growth rate was then computed by using the relationship given as;

Traditionally, price is one of the most important indicator of competition as it is a reflection of consumer appreciation of quality and indirect indicator of relative efficiency of the production process. Hence a price based measure like Nominal Protection Coefficient (NPC) has been accepted as a standard measure of competitiveness. Nominal protection coefficient is a direct measure of comparative advantage enjoyed by a commodity in the context of free trade. Although NPC measures only the deviation of domestic prices relative to world prices, the conclusion drawn regarding the policy environment facing agricultural production activity are essentially the same as those drawn from any other robust calculations. The coefficients shed light whether the country has comparative advantage in the production of that commodity or not. NPCs of Indian onion export were estimated in order to examine its export competitiveness in the world market. NPC is defined as the ratio of the domestic price to the world reference price of the commodity under consideration.

Pe = Export price or FOB price/ what the farmer would have received in    the context of free trade.

Table 1. Onion export from India, its share (%) to domestic production and world export 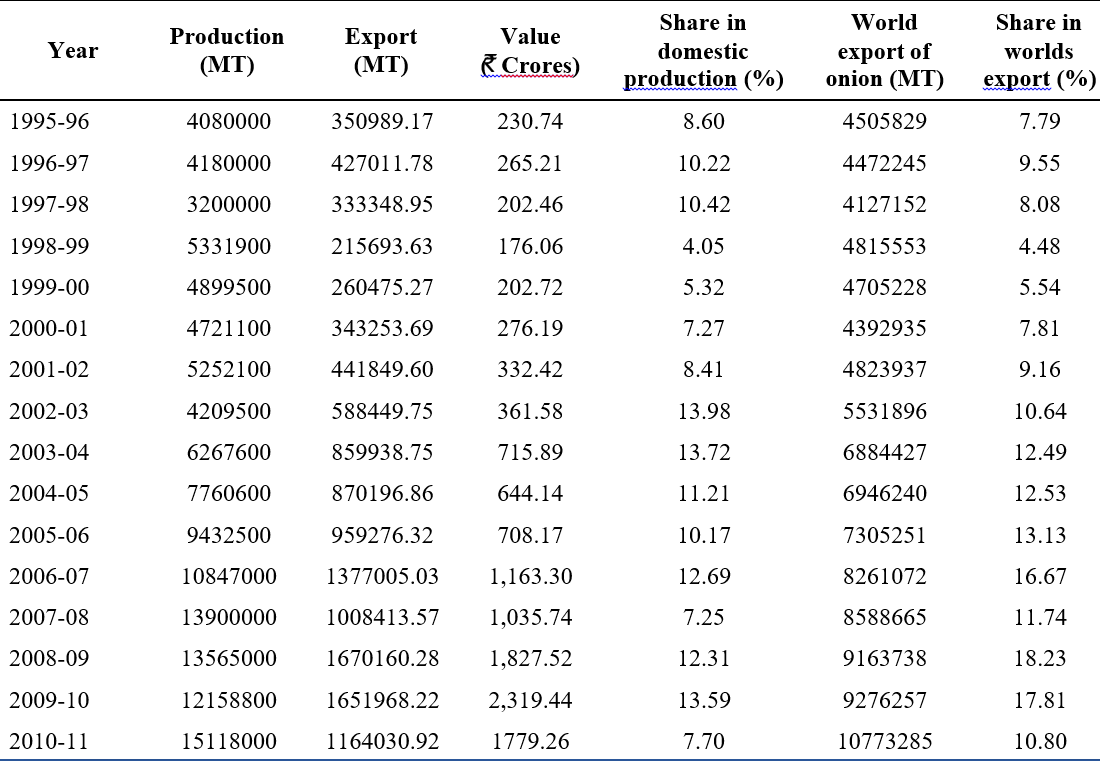 The competitiveness of Indian onion was examined using nominal protection coefficient (NPC). Nominal Protection Coefficients were computed to determine the extent of competitive advantage enjoyed by the

commodity in the context of free trade. The coefficients had highlight on whether a country has comparative advantage in the export of that commodity in the free trade scenario or not (Guledgudda et al., 2014).

The NPC calculated by taking the wholesale prices of onion which were considered from the Nasik market because it is having the major exports of onion from the nation to major destination Bangladesh. The wholesale prices from (Nasik) India were calculated by taking the average monthly wholesale prices of onion from AGMARKNET. Table 2.1 shows estimated NPCs of onion exports to Bangladesh over a period of three years. The NPC observed as 0.81 in 2017, 0.88 in 2018 and 0.64 in 2019. These figures revealed that Onion exports to Bangladesh have moderate competitive advantage during the study period. Further, the average NPC value (0.78) is close to one which indicates that the competitiveness was low during the study period.

Table 2. Nominal protection coefficients of Indian onion to Bangladesh (2017 to 2019)

The results revealed that the export of onion to Bangladesh have moderate advantage and the average NPC indicated that the competitiveness was low. From time to time the government will ban the export of onion and also imposes MEP to tame domestic prices. This creates lot of instability in the export of onion as it debars traders from exporting onions. Hence an appropriate export policy should be developed. This will safeguard India’s reputation in the global market as a reliable supplier. Exporting dehydrated onion in the form of powder/ flakes/ chopped slices will attracts new avenues for exporting onion. Quality assurance is the key factor for export competitiveness of dehydrated onion.

Ajaruddin, M.G and Maman, A. 2020. Growth and export performance of Onion in India: An economic analysis. Journal of Pharmacognosy and Phytochemistry. 9(4): 346-349.