Seventy-seven genotypes of sugarcane selected from the first clonal stage were evaluated at Agricultural Research Station, Perumallapalle, Andhra Pradesh, from 2011 to 2012 for diversified uses viz., biomass per cane, fibre yield, theoretical yield of alcohol, commercial cane sugar (CCS) yield and cane yield in second clonal stage. The main objective of a selection programme is to shift the mean to a new peak by directional selection. The plant breeder will have to base his selection on a combination of a few important characters related to the main character under consideration in the form of a selection index by appropriate weightages assigned to the phenotypic values of each character so that the genetic gain in the character under consideration will be maximum without any loss in other important characters. Selection indices provide the means for making use of correlated characters for higher efficiency in selection for characters of low heritability. Selection index is a tool, which breeder can use successfully for selection on several characters simultaneously by discriminating the desirable ones on the basis of phenotypic performance. Among one hundred and twenty seven different selection indices formulated for fibre yield, higher relative efficiency of 1328.62 coupled with high genetic advance (57.13) was exhibited by the combination involving six traits viz., fibre yield (X1), shoot population at 240 DAP (X2), number of millable canes (X3), single cane weight (X4), CCS yield (X6) and cane yield (X7)

Sugarcane is an important cash crop and provides raw material for sugar industry, which is the second largest agro based industry of India. Sugarcane crop serves as the major source for a variety of products such as sugar, jaggery, molasses, bagasse, filter cake. It is realized that sugar production alone will not be able to make the industry profitable and under such circumstances diversification is a necessary consequence for the successful growth of industry. Sugar factories with cogeneration facility demand for high fibre varieties upto 16% as it helps in increasing the baggase availability (Natarajan, 2000). More than 500 sugar industries in the country have a potential to generate electricity of 5000 MW. However, the current installed capacity is only 2200 MW which is due to underutilization of full capacity of the industry to generate required quantity of bagasse and lack of energy canes with high fiber. Generally the main objective of sugarcane breeding is to develop varieties capable of producing high cane yield and CCS yield per unit land area. The recent awareness on the advantages of using green fuel for generation of power and use of gasohol to reduce automobile emission have resulted in setting up of a number of co generation plants in various sugar  mills. As sugar production scenario is changing, varietal needs have started changing. Hence, breeding programmes must integrate new traits such as high fiber, high biomass and high total sugars in addition to yield and juice quality.

Efficiency of index selection over straight selection has been studied in various crops including sugarcane ever since the concept was proposed by Smith (1936) based on Fisher’s discriminant function. Straight selection is often based on arbitrary considerations, while index selection has the advantage that (i) it is based on genotypic considerations, (ii) the different characters can be suitably weighed according to their relative importance and (iii) simultaneous improvement might be possible for the target character as well as the associated attributes. Discriminant function is useful in knowing the extent of improvement that can be achieved in a dependent character by selecting plants based on different combination of independent component characters. When a trait is associated with other characters, indirect selection through such traits is sometimes likely to be better than straight selection. But, when the number of characters associated with a trait is large, it becomes difficult to select simultaneously for all the characters. Under such circumstances, selection indices formulated involving different combinations of characters giving appropriate weightage to each character helps in making the selection procedure easy.

The technique of discriminant function developed by Fisher (1936) was adopted to know the genotypic worth of clones with respect fibre yield and their components so as to have computational formulae for construction of selection indices which when applied for selection can bring about effective improvement in these traits compared to straight selection.

The present investigation was carried out at Agricultural Research Station, Perumallapalle (Acharya N.G. Ranga Agricultural University), situated in the Southern Agro-climatic Zone of Andhra Pradesh, India. Seventy-seven genotypes along were planted in a randomized block design with two replications during April, 2011. Each entry was planted in 2 rows of 5 m length spaced at a distance of 80 cm between rows with 4 three budded setts per meter as seed rate. Fertilizers were applied at recommended dose of 224:112:112 kg ha-1 N, P2O5 and K2O, respectively for plant crop and 336:112:112 kg ha-1 N, P2O5 and K2O, respectively for ratoon crop. The recommended dose of P2O5 and K2O were applied as basal and nitrogen was applied in two equal split doses at 45 and 90 days after planting for plant crop. In ratoon crop, full dose of P2O5, K2O and half dose of nitrogen were applied at the time of ratooning and remaining dose of nitrogen was applied at 45 days after ratooning. Cultural practices like weeding, irrigation, earthing up and propping were followed to maintain good crop growth.

Fibre yield showed significant positive association with shoot population at 240 DAP (0.510), number of millable canes per plot (0.507), single cane weight (0.459), fibre content (0.389), CCS yield (0.686) and cane yield (0.779).Among seven characters that were used to formulate selection indices, fibre yield (X1) was considered as dependent character while other characters viz., shoot population at 240 DAP (X2), number of millable canes (X3), single cane weight (X4), fibre content (X5), CCS yield (X6) and cane yield (X7) which showed significant positive association with fibre yield were considered as independent variables. The top twenty three out of one hundred and twenty seven discriminant functions and the estimated values of genetic advance and relative efficiency for each combination of characters over straight selection for fibre yield were presented in Table 1 and briefly discussed below. The top ranking genotypes based on the best selection index for fibre yield were presented in Table 2. 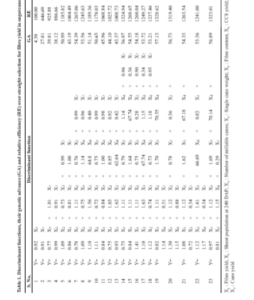 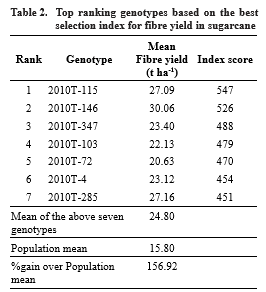 In the present investigation, the selection indices constructed with the inclusion of more than one character gave higher genetic advance and relative efficiency over straight selection for fibre yield. Similar results were reported in the selection indices formulated for cane yield, CCS yield and yield components in Dosado et al. (1980), Singh and Khan (1998), Singh et al. (2003), Krishna and Singh (2005) and Priya et al. (2013).

The selection indices constructed with the inclusion of more than one character gave higher genetic advance and relative efficiency over straight selection for fibre yield. When indirect selection scheme excluding fibre yield is to be followed, the index involving the combination of six characters viz., shoot population at 240 DAP (X2), number of millable canes (X3), single cane weight (X4), fibre content (X5), CCS yield (X6) and cane yield (X7) which exhibited maximum relative efficiency of 1241.00 with genetic advance of 53.36 could be considered for selection schemes to improve fibre yield.