The world faces the growing challenge of feeding over 9.5 billion people by 2050 under the looming threat of climate change. To address this challenge while reducing the carbon footprint and conserving water, our reliance on protein from plants will need to increase significantly. Chickpea is the third most important protein rich grain legume which is directly consumed as human food in the poorer countries where the projected population increases are most likely to occur. The crop is also important for sustainability of farming systems due to its nitrogen fixing ability. Chickpea yields are constrained by the crop’s high sensitivity to a number of abiotic stresses including frost, drought and heat stress. The major chickpea-growing states in India are Madhya Pradesh, Uttar Pradesh, Rajasthan, Andhra Pradesh, Haryana and Maharashtra, which constitute 85 per cent area with 89 per cent production. Andhra Pradesh is one of the major chickpea producing states in India. In terms of area and production chickpea occupies 5th position, with an area of 4.78 lakh hectares producing 2.42 lakh tones with an average productivity of 508 kg ha-1 (Anonymous, 2020).

The exposure of crop to low temperatures during germination and seedling establishment and to high temperature during flowering and seed formation phases under delay-sown chickpea results in drastic reduction in yield. Yield loss in chickpea can vary between 30 and 60% depending on genotype, sowing time, location, and climatic conditions during sowing season. Some chickpea genotypes have capacity to tolerate drought and in that case sowing time can be delayed. Agro-climatic factors that influence crop phenology may also have a major effect on crop growth rate and the partitioning of dry matter. It is therefore useful to integrate phenological and growth responses. Optimum date of sowing provides favourable environmental conditions for growth, development and yield of crops through optimum utilization of available natural resources. The present study was an attempt to understand phenology and agro- meterological indices influence on various growth attributes, dry matter partitioning and yield in chickpea genotypes.

A field experiment was conducted at Regional Agricultural Research Station, Nandyal during rabi season of 2018-19 and 2019-20 to find out optimum time of sowing and suitable genotypes of chickpea in scarce rainfall zone of Andhra Pradesh. The experiment was laid out in factorial randomized block design with three replications and consisted of three sowing dates i.e., 1st fortnight of October, November and December and fifteen genotypes. Among them, desi genotypes are NBeG 47, NBeG 49, JG 11, JAKI, NBeG 452, NBeG 738, NBeG
776, NBeG 779, NBeG 857, and kabuli genotypes are
NBeG 119, NBeG 399, NBeG 440, NBeG 458, Vihar and
KAK2.Genotypes considered as factor one and three sowing dates as factor two. The soil of the experimental field is black cotton soil, with PH 8.3 and EC 0.26 dS-m. The data collected from the experiment was subjected to statistical analysis as described by Gomez and Gomez (1984).

Growing degree days (GDD) is an arithmetic accumulation of daily mean temperature above certain threshold temperature (base temperature) and is calculated using the formula.

Chickpea GDD, and other heat units were numerically higher with first sown crop (D1) compared to rest of times of sowing crop. But drymatter was less than D2 and D3 sown chickpea crop, because of higher GDD from sowing to emergence and comparable GDD for emergence to 50 per cent flowering than D2. More over during second year an amount of 74.8 mm of rainfall received in eight rainy days at 44 to 46 standard weeks coincided with germination to vegetative stage of October 1st FN (D1) sown crop, which might had suppressed the photosynthesis. Whereas November 1st FN sown (D2) crop utilized the favourable weather condition for plant growth and recorded higher drymatter. Chickpea being a long day plant, delayed flowering increased dry matter production and accumulation, whereas condition favouring early flowering adversely affected dry matter accumulation (Pradeep and Hemantaranjan, 2012). 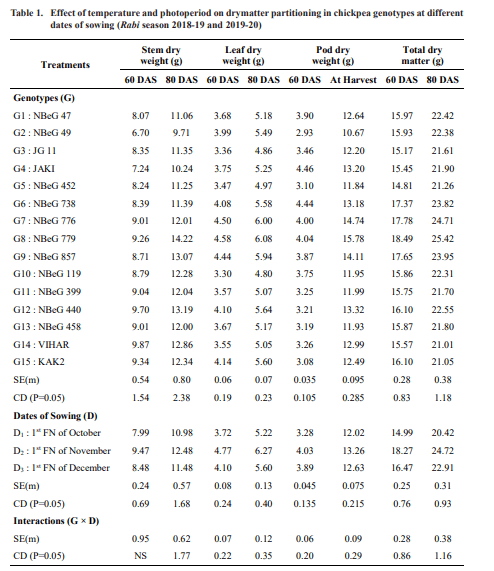 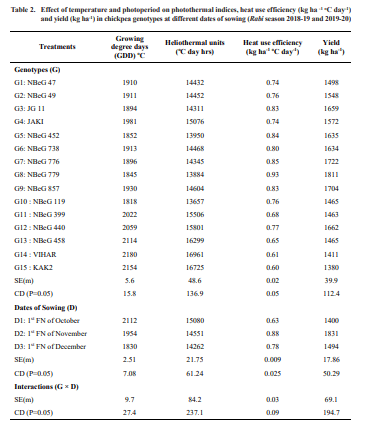 In the present study similar to stem dry weight, leaf dry weight was also higher during November 1st FN (D2) sowing because of higher heat utilizing ability and it further support that adequate rainfall, accumulated GDD during vegetative growth favours crop growth in terms of plant height, leaf area and stem dry weight compared to other two sowings.
It is clear from the experimental results that higher temperature during crop growth period lowered the drymatter accumulation under late and early planted chickpea crop. The results are in synchronous with Tripati et al. (2008) and Singh and Shono (2012) and they reported that high temperature during the reproductive stage induces increase in rate of respiration, resulting in loss of stored food material, which in turn reduces fresh weight and there was decline in shoot length and dry weight with corresponding decrease in dry weight of leaf, stem and pod.

Rathod, M.K and Chimmad, V.P. 2016. Influence of temperature regime on heat unit accumulation in relation to phenology and yield of chickpea. Journal of Farm Science. 29(1): 28-31