Chickpea (Cicer arietinum L.) is an important legume crop cultivated and consumed across the world. Among the different countries in the world, India is the largest producer and consumer of chickpea. It is grown in an area of about 9.85 Mha with a production of 10.32 Mt and productivity of 1048 kg ha-1 (http: //www. agricoop.nic.in). In Andhra Pradesh it is grown in an area of 0.58 Mha with a production of 0.72 Mt and productivity of 1241 kg ha-1. Chickpea is rabi crop generally cultivated under conditions of residual soil moisture and often subjected to deficit moisture after sowing. In chickpea, branching (pre flowering) and pod development stages are moisture sensitive stages. Water stress adversely affects many aspects of plant growth, which ultimately reduce dry matter production and seed yield. Reduction in seed yield depends on stage of crop growth, intensity and duration of stress. Phosphorus is important plant nutrient involved in wide range of plant processes from permitting cell division to the development of a good root system. Legumes generally have a higher phosphorus requirement as lot of energy is consumed during the process of symbiotic nitrogen fixation. Farmers are applying higher doses of complex fertilizers to chickpea. Vertisols have medium to high range of phosphorus. Under the above circumstances, the present work was undertaken to study the effect of irrigation levels and different phosphorus doses on performance of chickpea varieties under rainfed conditions.

The present experiment was carried out during rabi for two consecutive years (2017-18 and 2018-19) at Regional Agricultural Research Station, Nandyal (ANGRAU), Andhra Pradesh. The investigation was carried out in split-split plot design with two irrigation levels (without irrigation and with irrigation) as main plots, two varieties (NBeG 49 and NBeG 119) as sub plots and four phosphorus levels (0, 25, 50, 75 kg ha-1) as sub sub plots sown at 30 cm × 10 cm spacing with three replications. The soil of the experimental soil is moderately alkaline (pH-8.3), non saline (EC-0.15 dSm1), low in available nitrogen (113 kg ha-1), medium in available phosphorus (48.5 kg ha-1) and high in available potassium (366 kg ha-1). All the recommended package of practices was adopted to raise chickpea. One light irrigation (30 mm) was given at branching stage (pre flowering). Soil samples were collected and soil moisture at different intervals was calculated by gravimetric method. Observations were recorded from five randomly selected plants from each treatment in each replication to estimate the growth and yield parameters. The data recorded on soil moisture, plant height (cm), number of branches, days to 50% flowering, number of pods per plant, test weight (g), seed yield (kg ha-1) and harvest index (%) were subjected to statistical analysis by adopting Fisher’s method of analysis of variance at 5% level of significance as outlined by Gomez & Gomez (1984).

Rainfall during the crop growth period 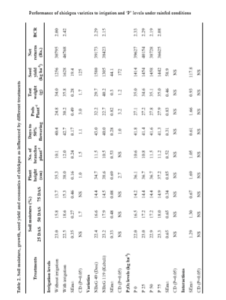 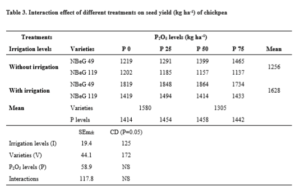 to 50% flowering (40.0 days), pods plant-1 (22.7), higher test weight (40.2 gm), lower seed yield (1305 kg ha-1), net returns (Rs 38,423 ha-1) and BCR of 2.15 was observed with Kabuli variety NBeG 119. A wide range of variation was observed for all traits under study suggesting variability among the genotypes for these traits. Results of the present investigation are in conformity with Ramanappa et al. (2013). The estimates of variability revealed that genetic variability was significant among the genotypes under study. The present findings were in accordance with Parameswarappa et al.(2012) for plant height and days to 50% flowering. Similar result was reported by Alkadev et al. (2017) for 100 seed weight. The variation for different qualitative and quantative traits in chickpea could help breeders to release better and superior lines and varieties (Malik et al. 2010; Rozina and Hamayoon, 2011). Different phosphorus levels did not influence growth, yield parameters and seed yield. This could be due to productive soil status for supply of phosphorus. Similar results were also reported by Nawange et al. (2011), Yadav et al. (2016) and Basha et al., (2018). The genotype NBeG 49 cultivated with application of 50 kg P ha-1 and with one irrigation at pre flowering/branching recorded higher seed yield (1864 kg ha-1) compared to NBeG 119 cultivated without application of phosphorus and irrigation (1202 kg ha-1) (Table 3).

It can be concluded that, most of the morphological and yield attributes such as plant height, pods plant-1, test weight, seed yield were enhanced significantly due to application of irrigation. Cultivation of desi variety NBeG 49 with application of 50 kg P2O5 ha-1 with one light irrigation (30 mm) at branching stage/pre flowering enhanced the productivity of chickpea under moisture deficit condition in vertisols.

The authors are grateful to All India Co-ordinated Research Project on Chickpea and Regional Agricultural Research Station, Nandyal (ANGRAU), Andhra Pradesh for providing the facilities for smooth conduct of the experiment.

Malik, S.R., Bakhsh, A., Asif, M.A., Iqbal, U and Iqbal, S.M. 2010. Assessment of genetic variability and interrelationship among some agronomic traits in chickpea. International Journal of Agricultural Biology. 12:81-85.