IN VITRO STUDIES ON THE EFFECT OF DIFFERENT FUNGICIDES AGAINST MYCELIAL GROWTH OF Sclerotium rolfsii, THE CAUSAL AGENT OF STEM ROT IN GROUNDNUT

B. RAGHAVENDRA* AND T. SRINIVAS

Groundnut is an important oil seed crop and is regarded as ‘king of oil seeds’. Among several biotic stresses of groundnut, stem rot caused by Sclerotium rolfsii causes up to 80 per cent yield loss. Saprophytic nature, broad host range and ability to produce resting structures make this pathogen difficult to control. In this experiment, ten fungicides viz., hexaconazole, azoxystrobin, tebuconazole, pyraclostrobin, carbendazim, carboxin, validamycin, chlorothalonil, mancozeb and copper oxy chloride were tested against the mycelial growth of the pathogen at four concentrations i.e. 500 1000, 1500 and 2000 ppm. Among these, hexaconazole, tebuconazole, azoxystrobin and carboxin showed 100 per cent mycelial inhibition at all the concentrations tested, whereas carbendazim proved to be least effective in inhibiting the mycelial growth of S. rolfsii, followed by copper oxychloride and validamycin.

Groundnut which is popularly regarded as the ‘King of oil seeds’ is one of the most important oil seed crops grown in India. It is rich in oil and protein content. It is also good source of minerals and vitamins. India is one of the largest producers of groundnut in the world. Due to increasing population and decreasing area under cultivation, more production must be obtained from limited area. Soil borne diseases are one of the major factors that limit groundnut productivity and production. Among the soil borne pathogens, Aspergillus niger Van Tieghem, Sclerotium rolfsii Sacc, and Rhizoctonia bataticola Taub are the major limiting pathogens.

More than 500 species of plants are being attacked by Sclerotium rolfsi, of which, the most common hosts are legumes, crucifers, and cucurbits (Punja, 1985). It is a soil borne pathogen and can survive at all climatic conditions through resting structures called sclerotia. Production of round and brown color sclerotia is the characteristic feature of this pathogen. The pod yield loss due to stem rot disease is 10-25 per cent, but under severe diseased conditions yield losses may range to up 80 per cent (Rodriguez-Kabana et al., 1975). Patil and Rane (1982) reported yield loss up to 10 to 50 per cent due to this disease. Adiver (2003) reported the yield loss of 1570 per cent in groundnut is due to leaf spot, rust and stem rot singly or in combination.

Chemical control can be suggested in those fields where stem rot disease is the major limiting factor in groundnut production. The efficacy of the chemical used depends on method of application, number of sprays, time of sprays and the dosages of appropriate chemicals used. Hence, in the present study, efforts were made to study the effect of already existing chemicals and new molecules on mycelial growth of the fungus.

Efficacy of ten fungicides viz., hexaconazole, azoxystrobin, tebuconazole, pyraclostrobin, carbendazim, carboxin, validamycin, chlorothalonil, mancozeb and copper oxy chloride were tested against the mycelial growth of the pathogen at four different concentrations i.e. 500 ppm, 1000 ppm, 1500 ppm and 2000 ppm. The details of fungicides, their recommended dosage and the concentrations tested in the present study were given in Table 1.

Poisoned food technique was employed to evaluate the efficacy of these chemicals. Stock solution of 30,000 mg a.i. ml-1 was prepared for each fungicide. From the stock solution, required quantity was pipetted out and added to required quantity of molten PDA medium in conical flasks to obtain final test concentration. Twenty ml of fungicide amended medium was poured in each pre-sterilized Petri plate. A mycelial disc of 5 mm diameter was cut from 15 day old culture of S. rolfsii using sterile cork borer under aseptic conditions and placed at the centre of each poisoned plate. Control was maintained by placing fungal discs in plates containing untreated (non poisoned) medium. The experiment was laid out in CRD with four replications per treatment .The inoculated Petri plates were incubated at 28 ± 2°C in BOD incubator.

The data on radial growth of the fungal mycelium was recorded 4 days after inoculation. Per cent inhibition of mycelial growth of test pathogen over control was calculated by using the formula mentioned below. The data were analysed statistically using CRD.

Mycelial growth of S. rolfsii varied in its sensitivity to the fungicides tested at varied concentrations. It was most sensitive to fungicides tebuconazole, azoxystrobin, carboxin, hexaconazole and showed 100 per cent inhibition at all the concentrations tested. Similar results were obtained by Johnson et al. (2008) by evaluation of five fungicides hexaconazole, propiconazole, mancozeb, chlorpyriphos and quinalphos against S. rolfsii in vitro and reported that hexaconazole at a concentration of 1000, 1500 and 2000 ppm and propiconazole at a concentration of 500, 750 and 1000 ppm completely inhibited the growth of S. rolfsii. Similarly, Perez et al. (2009) evaluated the in vitro reaction of fungicides to S. rolfsii and showed that tebuconazole inhibited mycelial growth and sclerotial production. Further, these triazoles are also effective against leaf spot disease (Adiver and Anahosur, 1995) preventing defoliation, which forms substrate for the growth of the pathogen.

Prabhu and Hiremath (2003) and Arunasri et al. (2011) reported that the triazole groups of fungicides viz., hexaconazole, propiconazole, difenconazole were highly inhibitory to the growth of S. rolfsii.

From the above findings and in comparison with earlier research, it can be predicted that there is no much variability in the pathogen. As the pathogen is soil borne, seed treatment with effective chemical is practical, soil application being expensive, especially in developing country like India where small land holdings prevail. However, fungicide control of foliar diseases has some potential effect on control of stem and pod rots. Finally, integration of cultural practices with potential biological and effective chemicals may offer effective solution for management of the disease rather than using chemicals alone and the present study helps in identification of effective chemical with its right dosage.

Adiver, S.S and Anahosur, K.H. 1995. Efficacy of some triazole fungicides against late leaf spot of groundnut and their subsequent effects on Sclerotium rolfsii. Indian Phytopathology. 48(6): 459-462 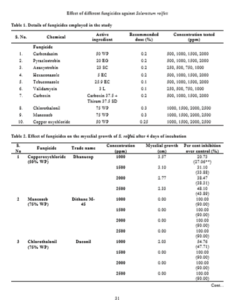 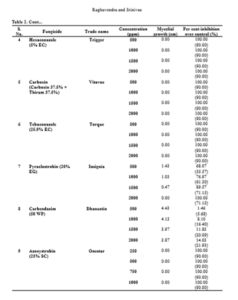 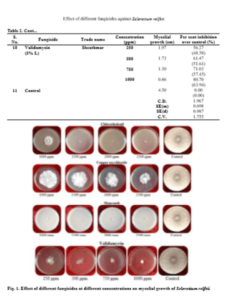 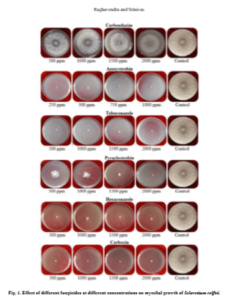