Fifty-four groundnut genotypes were evaluated for ten morphological and biochemical characters related to quality. For morphological characters like high kernel yield, high shelling percentage, high 100 seed weight, desirable testa colour and elongated shape, the genotype, TPT 4 along with ICGV 86584, TG 40, M 13 and ICG 7633 were adjudged as the best genotypes. Whereas, TPT 4 along with TCGS 584, ICG 1326 and ICG 3643 were identified as superior genotypes for biochemical characters like low aflatoxin content, low oil percentage, high protein and high non-reducing sugar content. Though combination of kernel yield with quality was difficult to find, in view of the relative desirability of quality characters vis-à-vis kernel yield the genotypes; TPT 4, M 13 and ICGV 86564 were identified as the best genotypes suitable for cultivation and trading as HPS varieties

It is predicted that in a liberalized economy the cropping pattern will shift in favour of rice, wheat, chickpea, cotton etc. and crops like groundnut face declension in their area expansion (Gulati and Sharma, 1997). It has to be accepted that crop scientists have failed to suggest an alternate crop to the dry land farmer who cannot dispense the cultivation of groundnut even in the near future. As there is no other alternative to groundnut in these areas, breeding for its improvement still shows promise. The liberalization promotes global trade, which warrants the production of quality produce. Though Indian groundnuts are price-competitive, they may not get access to markets of developed countries for non-compliance with the health and safety standards. The quality requirements for groundnut in the world food market are rather rigid and exacting. Natural Resources Institute of the U.K. Ministry for overseas development listed many quality requirements for groundnut pods and kernel and the over-riding consideration with regard to quality is without doubt freedom from aflatoxin. Aflatoxin, a toxic metabolite, contamination is of major concern in confectionary groundnuts. Aflatoxins are now known to be hepatotoxic, carcinogenic and teratogenic (Mehan et al., 1991). AFB1 is the most common and also the most toxic aflatoxin produced by Aspergillus flavus and Aspergillus parasiticum (Dube, 1990). Semi-arid tropics,  of the developing countries from which most of groundnut produce is coming, are considered to be high-risk areas for aflatoxin contamination and India is no exception. Around 50 countries impose aflatoxin regulations and most countries have a separate maximum acceptable level for food and feed (Van Egmond, 1989). The changed scenario adds yet another objective of breeding for quality produce, which includes resistance to aflatoxin content also. Hence, a thorough search in the germplasm and its characterization is essential to pick up the genotypes for breeding for quality improvement in groundnut.

Fifty-four genotypes were grown in a randomized block design (RBD) with three replications in post rainy season. Each genotype was grown in two rows of 4.5 m length with a spacing of 45 cm between rows and 15 cm between plant to plant in a row. The experimental plot was supplied with fertilizers at the rate of 30 kg N, 60 kg P2O5 and 45 kg K2O per hectare. The crop was provided with irrigation at suitable intervals but was withheld between 80 and 100 days after sowing when the crop was experiencing moisture stress. Necessary plant protection measures were taken during crop growth period on the plant but not as soil application. Five random plants from each genotype per replication were used to record data on morphological and biochemical characters.

The virulent strain of the pathogen (Aspergillus flavus) made available by the Department of Plant Pathology, RARS, Tirupati was considered to be aggressive and toxigenic strain. The mass multiplied inoculum of A. flavus was applied at 45 days after sowing by opening a furrow on a side of the plant row. As a matter of fact the fungus was mass multiplied by organic-matrix method as per the modified procedure given by Will et al. (1994). The cracked pearl millet seeds treated with A. flavus inoculum were applied at the rate of 2.5 g per onemeter length of the crop to facilitate the infection of the pathogen to the crop. Care was taken to keep the soil wet at the time of application of the fungus. After harvest, the pods were shade dried for seven days and stored in a galvanized iron container. Aflatoxin content in groundnut kernels produced by A. flavus was estimated after one month of storage by indirect competitive Enzyme Linked Immunosorbent Assay (ELISA) as per the procedure given by Reddy et al. (1988).

Shape of kernels, an important quality parameter was recorded as per the scale (1-5) suggested by Misra et al. (2000). An elongated shape was considered the best and was accordingly given a rating of 1 while round (spherical shape) was assigned the lowest rating. Seed size uniformity is a quality character and was measured as per the scale (1-10) provided by Misra et al. (2000). A rating of 1 was assigned to the genotype, which gave the maximum uniformity in size of kernels and a rating of 10 to that which showed maximum variation in size, i.e., a mixture of small-medium-large kernels. The colour code for testa was assigned to the genotypes by visually comparing the colour of testa with those given by Nigam et al. (2004). Pink to light brown testa colours were considered desirable (Nigam et al., 1989) and were given a rating of 1, where as dark red to purple as undesirable and were assigned a rating of 10. Oil in the seed was estimated with the help of NMR (Nuclear Magnetic Resonance, Model New Port Analyser, Oxford Analytical Instruments, England) analyzer. The genotypes with low oil percentage were assigned the highest score. The method of Lowry et al. (1951) was adopted for estimating protein content with Folin-Ciacalteu reagent. Nonreducing sugars, which include sucrose, were extracted from alcohol and estimated by the method of Nelson (1944).

Besides high yield, the kernels of confectionary types should possess good morpho-biochemical characters. Higher values for 100 seed weight, kernels with elongated shape, tapering ends, and pink to light brown testa colours were considered desirable by Nigam et al. (1989). Misra et al. (2000) opined that high uniformity in kernel size, low oil, high protein and high sucrose contents were desirable to assess the export worthiness of hand picked and selected (HPS) genotypes. They also reported that tapering ends of kernels for easy blanching, low oil for better health, higher protein for more nutritional food value, sucrose (non-reducing sugar) from organoleptic point of view, were the most desirable attributes to the end user of confectionery groundnuts. As per the recommendations of Natural Resources Institute of UK Ministry for Overseas Development (Chandrasekhar, 1991) freedom from aflatoxin (< 5 ppb) was considered as the overriding principle in deciding the quality in groundnut.

With this back ground a comprehensive evaluation of genotypes for their net handpicked and selected worth with an integrated evaluation of morphological and biochemical characters were carried out. For this evaluation each genotype was ranked according to numerical value and desirability of the character. Among the morphological characters, high kernel yield, high shelling percentage, high 100-seed weight, maximum uniformity in seed size, light pink or light brown colour testa and elongated shape of kernels with tapering ends were considered desirable characters while among the biochemical characters, low aflatoxin content, low oil percentage, high protein content, and high non-reducing sugar content were considered desirable and accordingly the ranks were assigned (Table 1 and 2). 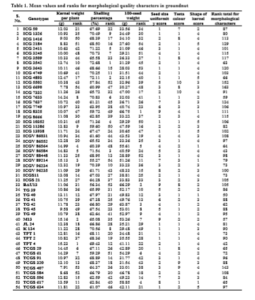 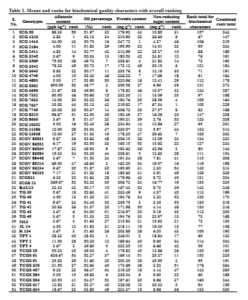 For biochemical characters, TPT 4 with a rank total of 59 was identified as the best genotype. Its kernel weight was also the highest. It has recorded the second lowest aflatoxin content. The second best genotype, TPT 1 with a rank total of 60 recorded moderate kernel weight, which was at par with the average. Similarly, the genotype TCGS 584 stood third (60) but its kernel weight was inferior. However, both TPT 1 and TCGS 584 were susceptible to A. flavus. The genotypes, ICG 1326 and ICG 3643 ranked 4th and 5th respectively. Among these two genotypes, ICG 1326 has recorded the lowest aflatoxin content but their kernel weights were not significantly superior over mean. Hence TPT 4 was adjudged as the best genotype for biochemical characters related to quality. It was also observed that most of the high yielders were not superior for biochemical characters.

On the basis of a combined evaluation of genotypes for morpho-biochemical characters, the genotype, TPT 4 with a combined rank total of 101 and M 13 with 130 were identified as the I and II best genotypes respectively. Incidentally the former was the highest kernel yielder and the later also produced significantly higher kernel weight per plant. TPT 1 was identified as the third, ICGV 86564 the fourth and ICG 1326 as the fifth best genotypes with combined rank totals of 133, 144, and 147 respectively. However the kernel weight of ICG 1326 was low though resistant to aflatoxin production, that of TPT 1 was at par with mean but susceptible to aflatoxin production and that of ICGV 86564 was significantly superior over the average.

Thus a combination of kernel yield as well as superior quality characters was difficult to find. In view of the relative desirability of quality characters vis-à-vis kernel weight per plant, the genotypes TPT 4, M 13 and ICGV 86564 were identified for cultivation and trading as HPS varieties. The worthiness of M 13 (Varman and Senthil, 1998) and ICGV 86564 (Venkataravana et al., 2000) for many characters were also reported earlier. The best genotype that had recorded the lowest aflatoxin content was ICG 1326. The next best genotypes for aflatoxin resistance were TPT 4, K 134 and M 13. The other genotypes found superior for respective quality characters might be used in the breeding programs for gene pyramiding to produce genotypes with high yield and quality as well.

Gulati, A and Sharma A. 1997. Freeing trade in agriculture: Implications for resource use efficiency and cropping pattern changes. Economic and Political Weekly. 32(52): 154- 164.

Nelson, N. 1944. A photometric adaptation of the somogyi method in the determination of glucose. Journal of Biological Chemistry. 153: 375-380.

Van Egmond, H.P. 1989. Current situation on regulations for mycotoxins. Overview of tolerances and Status of standard methods of sampling and analysis. Food additives and contaminants 6(2): 139-188.