Pulses are commonly known as food legumes, belongs to family Fabaceae and have an unique ability of biological nitrogen fixation, mobilization of insoluble soil nutrients with their deep root system hence, popularly known as wonderful gift of nature. Pulses are rich source of proteins compared to cereals hence they possess great importance in Indian Agriculture (Prajapati et al., 2017). World health organization recommends per capita consumption of pulses as 80 g day-1.
Blackgram occupies fourth position in terms of area, production and productivity in India, it is cultivated in an area of about 4.48 m ha with production of 2.8 mt and productivity of 632 kg ha-1. In Andhra Pradesh it is cultivated in an area of 5 m ha with production of 3.29 m t and productivity of 658 kg ha-1 (Anonymous, 2017). Blackgram is one of the utmost important pulse crop with high price and cultivated in almost all parts of India. It has perfect combination of all nutrients, which includes carbohydrates (60%), proteins (26%), fat (1.5%),calcium (154 mg), minerals (3.2%), phosphorous (385 mg), fiber (0.9%), 9.1 mg of iron and vitamin B-complex (Jadhav et al., 2019).

Potential of blackgram in terms of yield is poor as it is mainly grown in rainfed condition with meager management practices and also due to several physiological and biochemical processes hampering the crop growth. Physiological problem like flower drop and premature shedding of reproductive structure diminishes number of potential sinks which seems to be associated with nutrient deficiency and hormonal imbalance and results in reduced translocation of dry matter to reproductive parts. Further, the reduction of blackgram yield is due to inadequate partitioning of assimilates, poor pod formation and lack of nutrients availability during critical stages of crop growth which may be improved through foliar application of growth hormones coupled with micronutrients play a major role in improving the source sink relationship through increased capacity of source and increased translocation of assimilates to sink. (Kumar et al., 2018).

The concentrations used in the experiment were salicylic acid @ 100 ppm and boron @ 100 ppm. Three irrigations were given to the crop i.e., at the time of sowing, 20 DAS and at flowering stage.

SPAD chlorophyll meter readings (SCMR) were taken by following the method of Turner and Jund (1991) and the data was recorded on 5th or 6th leaf from top of each representative plant, between 8.00 a.m. and 9.00 a.m. at 30, 60 DAS and harvest.

Total dry matter partitioning efficiency was estimated in five plants by randomly pulled out with root system intact from each treatment in three replications and separated into roots, stems, leaves and pods. The plant parts were dried to a constant weight in hot air oven at 80ºC for 48 hours and the dry weights were recorded and expressed in g plant-1.

Number of pods plant-1, number of seeds per pod was counted for the five tagged plants and the mean value was calculated.

The experimental data were analyzed statistically by following standard procedure outlined by Panse and Sukhatme (1985). Significance was tested by comparing ‘F’ value at 5 per cent level of probability. Further the data was analyzed by OPSTAT (Operational statistics) software. 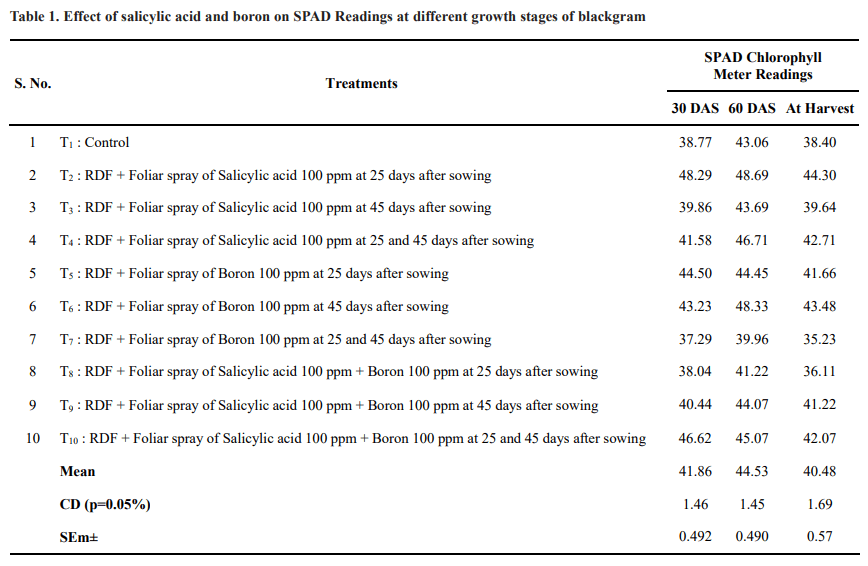 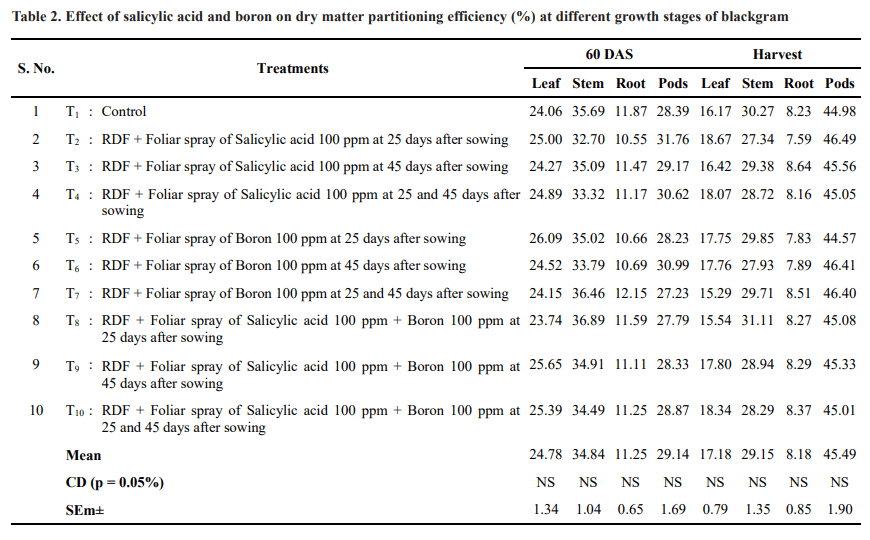 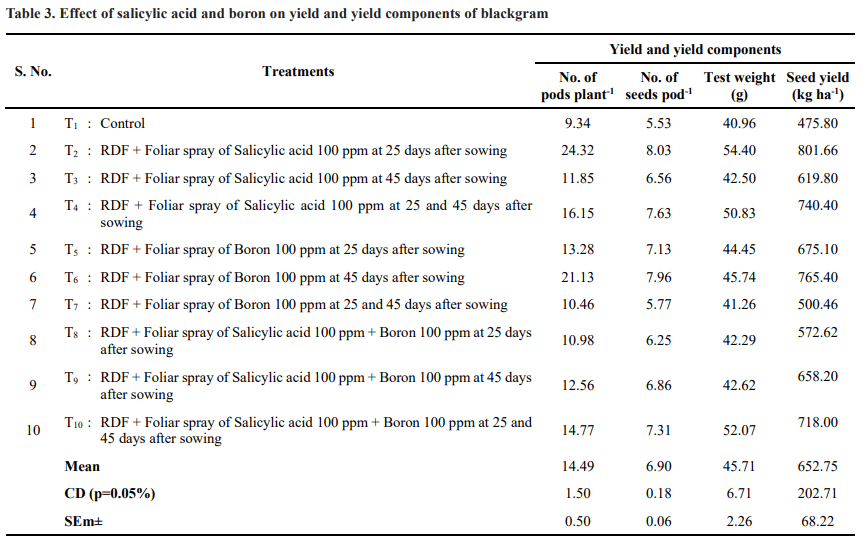 dry matter partitioning was obtained in T2 (18.67%), T8 (31.11%), T3 (8.64%) and T2 (46.49%) in leaf, stem, roots and pods respectively (Table. 2). Similar trend was observed by Kulsum et al. (2007) in blackgram. In dry matter partitioning, most of the treatments conferred more than 40% assimilates to the pods at maturity. Due to foliar application of nutrients and hormones leaf area and assimilation of photosynthates in leaf increased and ultimately higher assimilates partitioned to pod than control.

It is due to fact that boron plays a role in cell division, sugar and starch formation, carbohydrate metabolism, which further increases the size and weight of grain (Kaisher et al., 2010). Ali and Mahmoud (2013) confirmed that application of salicylic acid recorded the highest 1000 seed weight in blackgram.

With the application of nutrients and growth regulators enhanced pods to flower ratio being increased availability of nutrients and subsequently better translocation of assimilates from source to sink by preventing flower abortion and increased pod setting, number of pods plant-1, seeds pod-1, test weight and seed yield kg ha-1.

Ram, C., Singh, D and Jat, B.L. 2017. Effects of different phosphorous levels and frequency of boron levels on growth and yield of greengram. Advance Research of Journal of Crop Improvement. 8(1): 49-61.