Browntop millet (Brachiaria ramosa (L.) Stapf. or Urochloa ramosa (L.) R.D. Webster) is an annual hardy, heat and drought tolerant minor millet crop that grows to a height of 90 to 150 cm. Unlike other millets, brown-top millet has a unique quality as it can be grown in the partial shade which ensures wider choice of adoption even in fruit orchards or in agro-forestry system. Crop matures early approximately 75-90 days. It is known for its rapid forage production (hardly 50 days duration) act as a cover crop in plantation crops for soil erosion control and for high straw production. 100 grams of browntop millet contains 8.98, 1.89, 3.90, 8.20 and 71.32 per cent of protein, fat, minerals, crude fiber and carbohydrates respectively.

Low productivity in browntop millet is a major problem due to lodging during kharif normally when it is sown at closer spacing or broadcasting. The productivity of brown top millet can be increased by applying of fertilizers at optimum dose, especially nitrogen is required for initial establishment, vigorous and robust tillers with

broad leaves which enhances the quality and productivity of grain. Therefore, the optimum plant geometry and nitrogen management provides favourable environmental conditions to the crop during various growth and developmental stages, resulting in better performance and enhanced productivity of browntop millet.

The present field experiment was carried out at dryland farm, S.V. Agricultural College, Tirupati of Acharya N.G. Ranga Agricultural University. The experiment was laid out in a random block design with factorial concept with twelve treatment combinations and replicated thrice. The treatments include three plant geometry viz., P1 (30 cm × 20 cm), P2 (45 cm × 20 cm) and P3 (60 cm × 20 cm) and four nitrogen levels, viz., 20 kg N ha-1 (N1), 40 kg N ha-1 (N2), 60 kg N ha-1 (N3) and 80 kg N ha-1 (N4). The experimental field was sandy loam in texture which is low in organic carbon (0.38%). The soil is alkaline in reaction (pH 7.7), low in available N (151.0 kg ha-1), medium in available phosphorus (207.0 kg ha-1) and potassium (34.0 kg ha-1). The variety of browntop millet tested was GPUBT-6. A total rainfall of 859.0 mm was received in 33 rainy days during the crop growing period. Recommended dose of fertilizers was 40-20-20 kg N, P2O5 and K2O ha-1. The nutrients were applied in the form of urea, single super phosphate and muriate of potash. Available soil nitrogen (N) was estimated by the method described by Subbiah and Asija (1956) and the nitrogen status was expressed in kg ha-1. Soil available phosphorus was determined as described by Olsen et al. (1954) using spectrophotometer and expressed in kg ha-1. Soil available Potassium was estimated by neutral normal ammonium acetate extraction method using Flame Photometry (Jackson, 1973) and expressed in kg ha-1.Plants from each treatment in the plot were selected at random and tagged for taking the observation viz, nutrient uptake of NPK. The oven dried samples of plants material were ground in a willey mill and analyzed for N, P and K contents. The nitrogen, phosphorus and potassium uptake were calculated by multiplying the nutrient content of the plant sample with corresponding total dry matter and expressed in kg ha-1. The total nitrogen content in the plant sample was estimated by the Micro Kjeldal method as suggested by (Association of Official Agricultural Chemists (AOAC), 1960). The total phosphorus content in the plant sample was estimated with vanado-molybdo phosphoric acid method by Jackson (1973). The total potassium content in the plant sample was estimated with triple acid digestion method using Flame Photo Meter as suggested by Jackson (1973). The data collected were analyzed statistically following the procedure given by Panse and Sukhatme (1985) wherever the treatmental differences were significant, critical differences were worked out at five per cent probability level. Treatment differences that were not significant are denoted as NS.

Grain yield of browntop millet varied significantly due to plant geometry as well as nitrogen levels tried, while the interaction effect was found to be non significant.

The highest grain yield of browntop millet was realized with plant geometry P2 (45 cm × 20 cm) which was statistically on par with that of P3 (60 cm × 20 cm). This might be due to optimum plant geometry provided favourable microclimate which enables the individual plant in efficient utilization of growth resources like light,

moisture and nutrients which in turn to achieve the maximum productivity. Even though all the yield attributes were maximum in wider plant geometry, panicles on late formed tillers were not attained full maturity there by reduced the grain yield per unit area when compared to optimum plant geometry. Whereas severe intra-plant competition and lodging at reproductive stage due to higher plant height might have negative effect on grain yield under closer plant geometry. The results were in confirmity with the findings of Natarajan et al. (2019) and Santosh et al. (2020).

Among nitrogen levels tested, higher grain yieldwas registered with the application of 60 kg N ha-1 (N3) which was comparable with 80 kg N ha-1 (N4) followed by 40 kg N ha-1 (N2) which was in turn exhibited significant difference to both of them. Higher yield with increase in nitrogen level up to 60 kg N ha-1 (N3) might be due to the reason that better availability and uptake of nutrients resulted in enhanced chlorophyll synthesis, leaf area, photosynthetic efficiency, better growth and dry matter production which ultimately led to efficient partitioning and translocation of photosynthates from source to sink. Application of 80 kg N ha-1 (N4) resulted in more vegetative growth which in turn reduced the grain yield when compared to 60 kg N ha-1 (N3). Significantly lower grain yield was noticed with 20 kg N ha-1 (N1). The present results are in accordance with the findings of Vimalan et al. (2019) and Anitha et al. (2020).

Varied plant geometry and nitrogen levels exerted significant influence on the straw yield of browntop millet, while their interaction effect was found to be non significant.

Under varied nitrogen levels tested, straw yieldwas significantly higher with the application of 80 kgNha-1 (N4) which was comparable with 60 kg N ha-1 (N3) 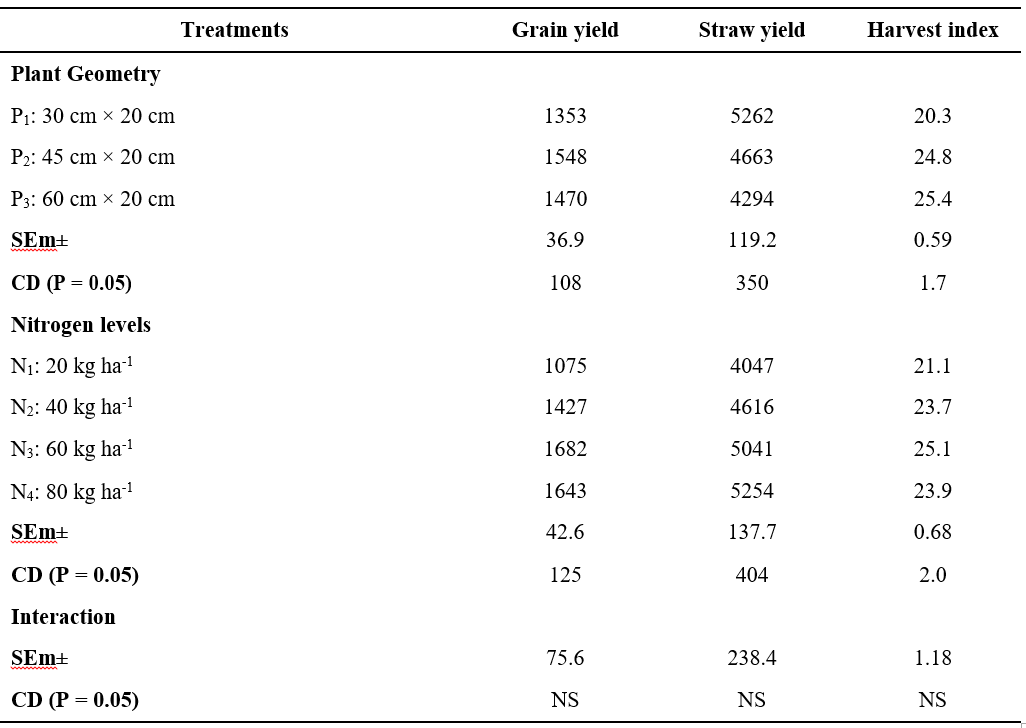 followed by 40 kg N ha-1 (N2) which in turn statistically not comparable with 60 kg N ha-1 (N3). The increased dose of nitrogen leads to higher availability of nitrogen along with enhanced absorption of other nutrients. Nitrogen plays a key role in the synthesis of chlorophyll and higher availability of nitrogen tends to increase leaf area, plant height, number of tillers and dry matterdue to higher photosynthetic efficiency ultimately increased growth and straw yield. The similar results were reported by Prabudoss et al. (2017) and Saikishore et al. (2020). Significantly lower straw yield was noticed with 20 kg N ha-1 (N1).

Nutrient uptake of browntop millet differed significantly due to varied plant geometry and nitrogen levels, while the interaction effect found to be non significant. 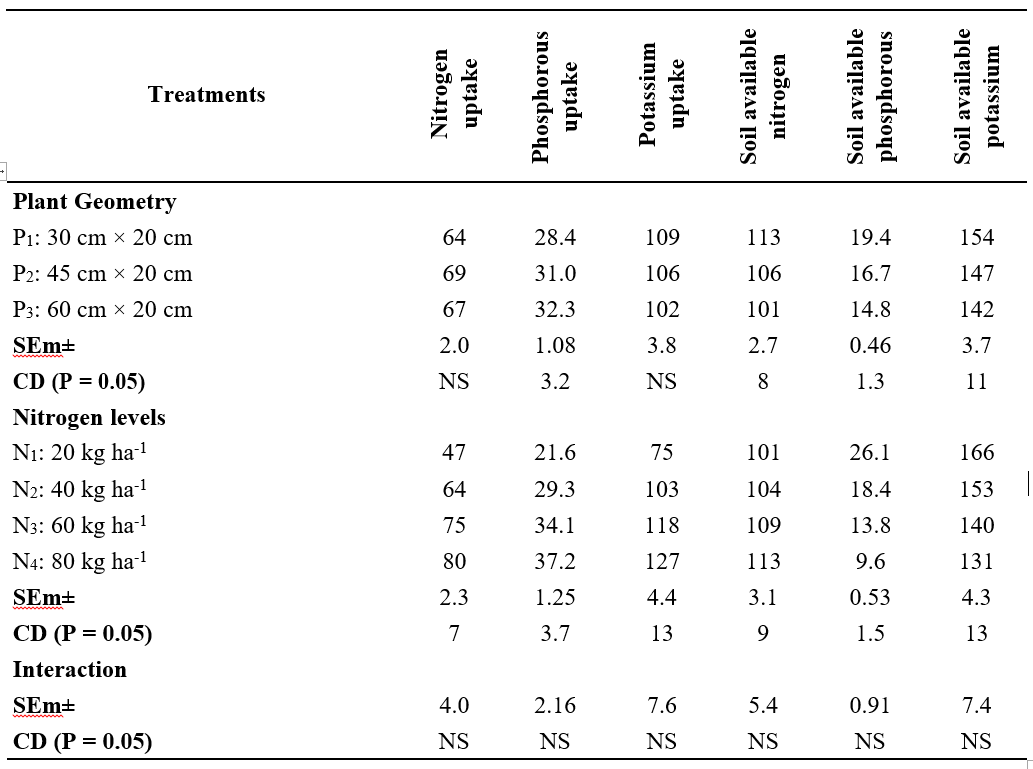 Uptake of nutrients was maximum with application of 80 kg N ha-1 (N4) which was on par with 60 kg N ha-1 (N3) followed by 40 kg N ha-1 (N2) which was inturn significant difference to that of later one. The growth and yield of crop was determined by the presence and availability of nutrients in the soil for uptake. Uptake of nutrients depends on the concentration of ions in the available form in the external medium. Increased levels of nitrogen might be increased the availability of nitrogen ions in the soil solution resulted in higher absorption of P and K along with nitrogen. Similar findings were also observed by Jyothi et al. (2016) and Vimalan et al. (2019). Significantly lower nutrient uptake was noticed with 20 kg N ha-1 (N1).

Varied plant geometry and nitrogen levels have exerted significant influence on the post harvest soil nutrient status (available nitrogen, phosphorus and potassium), while the interaction effect was not statistically traceable.

Finally, it can be concluded that higher grain yield of browntop millet could be achieved with plant geometry of 45 cm × 20 cm along with the application of 60 kg N ha-1on sandy loam soils of Southern Agro-climatic Zone of Andhra Pradesh.

Saikishore, A., Rekha, K.B., Hussain, S.A and Madhavi, 2020. Growth and yield of browntop millet as influenced by dates of sowing and nitrogen levels. International Journal of Chemical Studies. 8(5): 1812-1815.