The present study aims at examining the economic viability of sweet orange in Anantapuramu district of Andhra Pradesh. Forty sweet orange farmers constituted the sample for the study. Data collected from primary sources have been analyzed with the set objectives using appropriate techniques. Average establishment cost was worked out to be ` 326479 per hectare of sweet orange. The gross returns per hectare of sweet orange has been worked out to be ` 1479465 during 5 to 10 years age, ` 4001250 (11 to 20 years age) and ` 3072630 (21 to 30 years age). The farmers were receiving a net income of ` 22487.66 through inter crops during pre bearing period. Even after taking the returns from intercrops, the farmer has to bear a loss of ` 303991.34 during pre bearing period. The net returns obtained were ` 1024650 during 5 to 10 years age to ` 3237878 (11 to 20 years) and

23.6 per cent. The ﬁndings of the study show that sweet orange was a proﬁtable and promising enterprise for the driest district of Andhra Pradesh state. There was a greater scope for setting up of processing industry for sweet orange which helps to the growers to realize better price for their produce, which also generates employment. Given the fruit product diversity, that also spreads in terms of production across seasons, the farmers may be encouraged to form producer’s societies on a co-operative basis to market their produce and also realize higher value for their produce.

Horticulture sector shows an enormous potential to raise the farmers income, provide livelihood security and earn foreign exchange through exports. India is the second largest Producer of fruits and Vegetables in the world, contributing about 9.3 per cent share of total world production. In 2020-21, the production of horticultural crops recorded an enormous production of 326.6 million tones (MT) which is more than the total food grain production (Abhishek et al., 2021). Further there was a change in the consumer preferences across all expenditure classes towards fruits and vegetables (Sarma et al., 2018). This increasing trend in production of horticultural crops was also observed in sweet orange in India, where the area under sweet orange increased from 157 to 191 thousand hectares from 2010-11 to 2019-20. India had made fairly good progress in sweet orange production for the same period with increased production from 1316 thousand tones to 3483 thousand tones. The yield of sweet orange has raised from 8.4 to

Multistage purposive random sampling method was adopted to select the ultimate sample for the study. Anantapuramu district was purposively selected for the present study as it has the highest area under sweet orange in Andhra Pradesh. Based on acreage under sweet orange. top two mandals i.e., Tadipatri and Mudigubba were selected for the study. Using the same criteria top two villages from each mandal were selected. From each village 10 sweet orange farmers were selected randomly, thus the total sample for the study was 40. Primary data was collected for the agricultural year 2020-21 through personal interview with the help of a well structured schedule. To know the costs and returns simple arithmetical tools were employed and the ﬁnancial feasibility of sweet orange orchards was analysed using discounted measures like NPW (Net Present Worth), B-C ratio (Beneﬁt Cost ratio) and IRR (Internal rate of Return). Bhat et al. (2011) also employed these discounted measures to study the economic appraisal of kinnow production under north-western Himalayan region of Jammu.

This provides a comprehensive understanding of the composition of type of farmers, education status, average size of farm holding and asset structure of the selected farm respondents. The results presented in Table 1 revealed that 45.00 per cent of the sample respondents were large farmers, 30.00 per cent of them were medium farmers and 25.00 per cent were small farmers. Majority of the farmers (45.00%) had their primary education, 22.50 per cent were illiterates, 17.50 per cent had secondary education and 15.00 per cent studied up to college level. The land holding particulars of the respondents presented in Table 2 disclosed that the average size of the land holding of the sample respondents was 5.23 ha and of the total holding, 81.84 per cent constituted the dry land and the remaining was irrigated land (18.16%). Further 81.26 per cent of the total holding of the respondents was under sweet orange cultivation. The income earned by the farmers and the risk bearing ability of the farmers largely depends on the value of the assets owned by them. From the results it was found that land value constituted a major item of the total assets (90.10%). The value of other assets like farm buildings, live stock, bore well, motor and other irrigation equipment and machinery and implements constitutes only 9.90 per cent (Table 3) of the total value of the assets.

Table 1. Type of Farmers and educational status in the Selected Orchardists

Table 3. Asset Structure of the orchardists of sweet orange farms

The total labour requirement for the cultivation of sweet orange during its economic life period was 971 man days ha-1 (Table 5). It was noted that major labour consuming operations were application of FYM, inter cultivation, application of plant protection chemicals, irrigation and application of fertilizers. Pruning and removal of ﬂowers operations were undertaken only during the establishment period only, Hence, these operations required less labour about 16 mandays ha-1 in sweet orange orchards. The operations which are performed only once in the life period of orchard were pitting, planting, staking, fencing and gap ﬁlling took still lesser share of labour. Majority of the farmers in the study area go for dispose of the standing crop to the pre harvest contractor. The farmers believe that it is a safety measure against the ﬂuctuations in prices of sweet orange. Hence there was no human labour utilization for harvesting operation in the study area. It is evident from Table 6 that the machine power utilized by sweet orange farmers was 199.5 hrs per hectare during the entire economic life of sweet orange. The machine power was used for operations like land preparation, inter- cultivation and sprayings.

Sweet orange was a perennial commercial crop can be cultivated economically for about 30 years. It takes four years to establish and starts yielding from ﬁfth year onwards. Therefore, the costs incurred in establishing the orchard during the pre-bearing period at current prices of inputs and input services were considered as 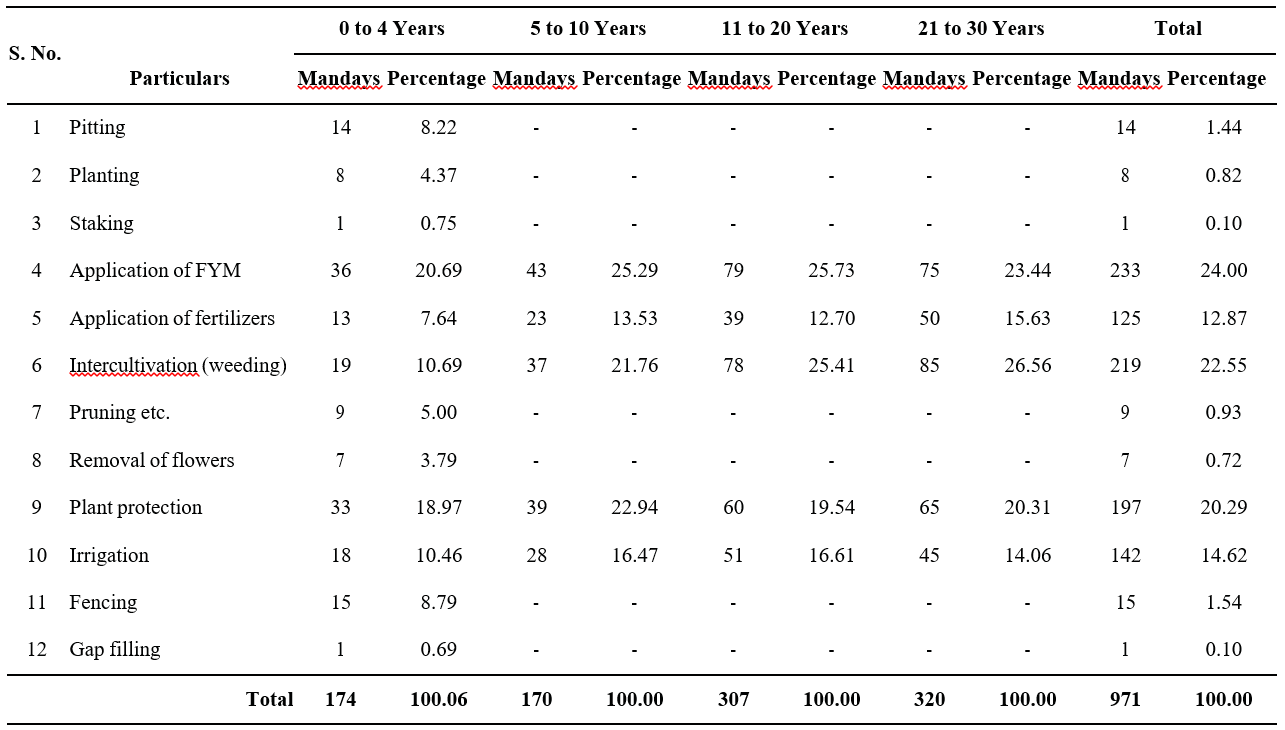 establishment costs. The establishment costs include the expenditure on land preparation, pitting, laying of irrigation channels, fencing, plant material, planting, pruning, removal of ﬂowers and other subsequent operations in nurturing the orchard together with ﬁxed costs. Results presented in Table 7, indicated that the total establishment cost of sweet orange was ` 326479 per hectare. The highest cost item of expenditure was rental value of owned land which was estimated to ` 98840 per hectare, that constitute 30.27 per cent followed by wages to human labour ` 86960 per hectare contributing

` 24599 (7.53%). Pokharkar et al. (2016) reported similar observation in their study on economics of production of Guava in western Maharashtra. Annual maintenance costs included the costs incurred to maintain the orchard from 5th year onwards up to the economic life period of the orchard. It is clear from the results that the annual maintenance cost per hectare increased with the increase in the age of the orchard. This is because of higher expenses incurred on various inputs and input services. This increase may be attributed to the direct relationship between the input requirement and age of the plant. The annual maintenance cost ranges from ` 207036 during 5 to 10 years age to ` 350408 during 11 to 20 years and ` 365503 during 21 to 30 years age. Similar results were also reported by Sharma et al. (2006).

Even after taking the returns from intercrops, the farmer has to bear a loss of ` 303991.34 during pre bearing period. During the ﬁfth year onwards the net returns becomes positive. The net returns were worked out to be

In the light of above discussion, it may be concluded that even though the establishment cost of sweet orange is very high yet it is an economically viable enterprise. 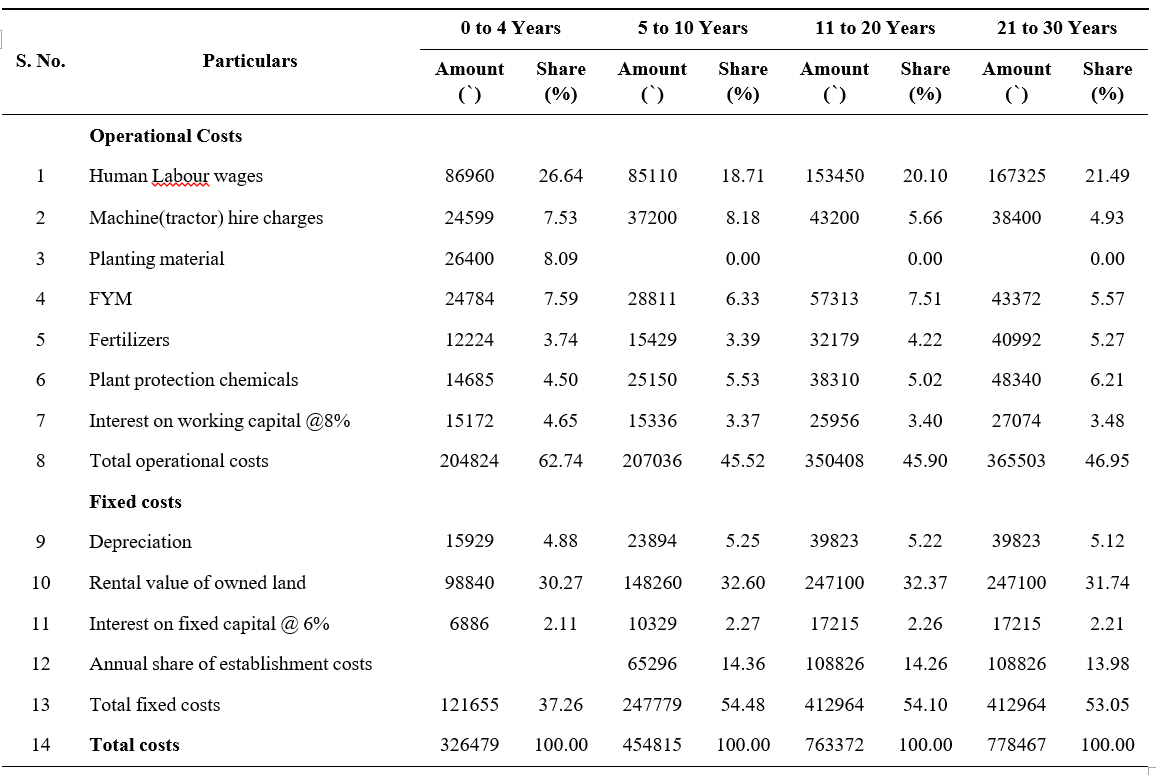