The post harvest losses of food grains occur at different levels of storage from harvesting up to consumption. Abiotic and biotic factors are of major concern for losses of stored grains in the world. Among the biotic factors insect pests, rodents, mites and fungi contribute major portion of damage. Out of these post- harvest losses due to insects alone accounts for 2.0 to 4.2 per cent followed by rodents 2.50 per cent (IGMRI, 2020). Stored grains and their products are attacked by many insect pests as internal and external feeders.

The red flour beetle, Tribolium castaneum is an external feeder and feeds on broken rice, flour, cereals, meal, beans, spices and other stored products. Control of these insects relies heavily on the use of chemical insecticides and fumigants, which has led to problems such as negative impact on environment, residual toxicity, development of resistance to insecticides and lethal effects on non-target organisms (Abhijit et al., 2018). Indiscriminate and continuous use of synthetic insecticides and fumigants like phosphine in poorly sealed warehouses at sub lethal doses resulted in the development of resistance in many of the stored grain pests especially in bulk storage facilities and rice storage godowns. In view of resistance of stored grain pests, suitable alternative strategies like use of safer plant products like essential oils can be explored for the management of T. castaneum in stored rice.

Neem, Azadirachta indica contains many properties like insecticidal, ovicidal, antifeedant and growth inhibiting effects against many insect pests due to presence of triterpenoid, azadirachtin and other biochemical compounds such as nimbin, nimbidin and salanin (Choupanian et al., 2017). The essential oils isolated from the clove buds, Syzygium aromaticum is widely used and well known for its medicinal properties. It exhibits different insecticidal properties like inhibition of oviposition, insecticidal activity, prevention of adult emergence with isoeugenol being particularly active compound (Abo-El-Saad et al., 2011). Sweet flag, Acorus calamus is a herbaceous perennial and the rhizomes of the plants were found to have insecticidal, ovicidal, antifeedant and repellent activities with bioactive compounds like α-asarone and β-asarone (Abhijit et al., 2018).

In the present study, effect of essential oils like neem-azal, clove oil and acorus oil were studied against red flour beetle, T. castaneum in stored rice.

The essential oils viz., Neem-azal, Clove oil and Acorus oil used in this study were procured from Indian Scientifics, Tirupati. Different test concentrations of essential oils were prepared using acetone as a solvent by serial dilution method. Neem-azal of 1.5 and 2.0%, Clove oil of 10.0 and 15%, Acorus oil of 10 and 15% were prepared. Three replications of each treatment were maintained along with an untreated control.

The efficacy of essential oils was evaluated against larvae of T. castaneum using diet incorporation method (Ganesh et al., 2020). The Rice grains were mixed with formulations at different test concentrations. Two hundred (200) µl of formulation was added to 20 grams of broken rice and the plastic containers of measurement (11 cm × 8 cm) were shaken manually for 5 minutes for uniform distribution. Each treatment was replicated thrice and 20 larvae (6-7 days old) were released into each plastic container. The containers were closed with muslin cloth for sufficient ventilation and kept in ambient laboratory conditions of 30°C temperature and 70 per cent relative humidity. The mortality counts were taken at 1, 3, 5, 7 and 10 days after exposure. Insects were considered dead which were without any leg or antenna movements after prodding with a fine brush.

The Filter Paper Impregnation Method (FPIM) was used for testing contact toxicity of formulations (Manal et al., 2018). The filter papers (Whatman) were trimmed into appropriate sizes and laid in a labelled Petri dish. Three replications of each treatment were maintained along with an untreated control.

adults were released into each Petri dish. Each treatment was replicated three times along with untreated control. Adult mortality was recorded at 24, 48 and 72 hours after treatment.

Based on the per cent mortality count, LC50, LC90 and LT50 values were calculated through probit analysis using the SPSS statistical package for determining their effectiveness against larvae and adults of T. castaneum. The larval mortality and adult mortality were subjected to angular transformation. The data was statistically analyzed using SPSS software.

Results of present study are in agreement with findings of Abhijith et al., (2018) who studied efficacy of acorus oil using filter paper impreganation method and recorded 100 per cent mortality in Lasioderma serricorne and Cryptolestes ferrugineus adults when treated with acorus oil 10 per cent after 60 hours after treatment. Rashmi et al. (2019) recorded repellent activity of neem oil against T. castaneum which showed 88.31, 95.08 and 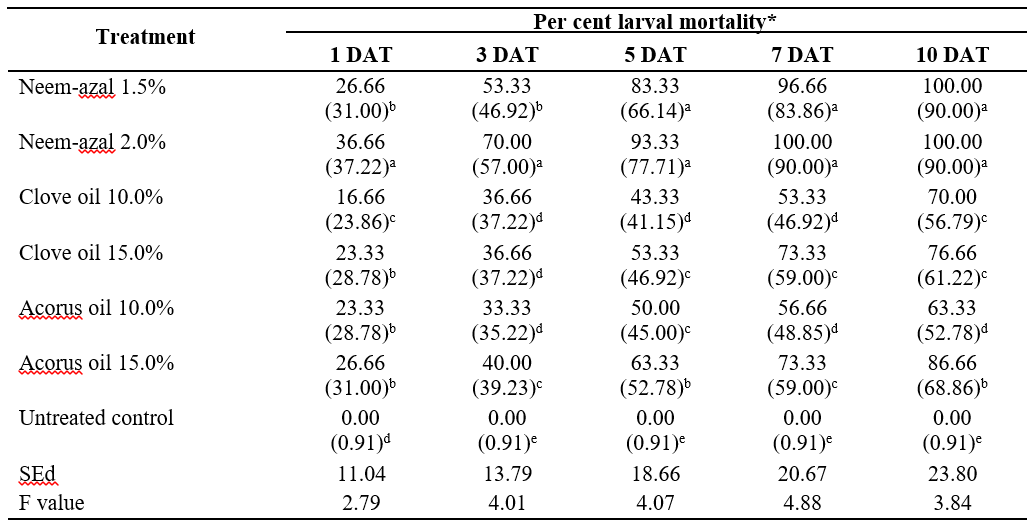 DAT-Days after treatment; *Mean of three replications; Figures in parentheses are angular transformed values; Means followed by same letters are not significantly different by DMRT 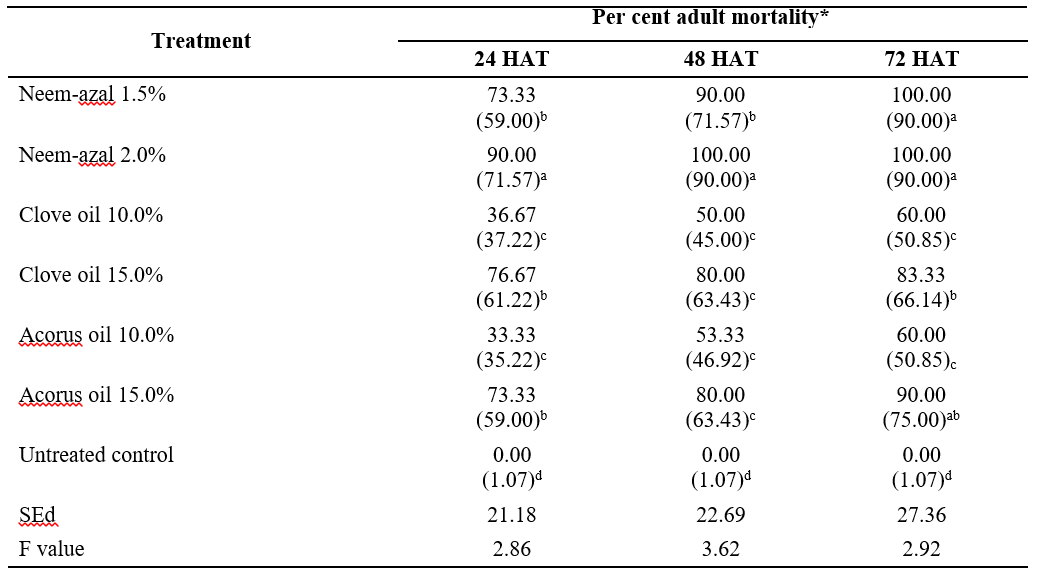 HAT-Hours after treatment; *Mean of three replications; Figures in parentheses are angular transformed values; Means followed by same letters are not significantly different by DMRT

Rajasri et al., (2014) studied efficacy of neem formulations on pulse beetle and reported that all the

The essential oils viz., neem-azal @ 2%, acorus oil @ 15% and clove oil @ 15% were found to be highly effective against red flour beetle larvae and adults in stored rice and hence these safer biopesticides can be used for ecofriendly management of T. castaneum in stored rice.