DIRECTION OF TRADE OF INDIAN TOBACCO

Tobacco is one of the commercial crops grown in India and and in many other countries. Nicotiana tabacum and Nicotiana rustica are the commercially cultivating species of tobacco. Tobacco is contributing a significant income to the nation economy in the form of excise revenue and foreign exchange. Though India is the third largest producer and second largest exporter of tobacco, its share in global tobacco trade is only six per cent by value. The main objective of the study is to analyse the structural changes in tobacco exports from 2009-10 to 2017-18 by using markov chain analysis. The major findings of the study revealed that South and South East Asia was the stable export destination for Indian unmanufactured tobacco followed by West Europe and Middle East. Africa was found to be unstable market for Indian unmanufactured tobacco during the study period.

Tobacco (Nicotiana Species) belongs to the genus Nicotiana and family Solanaceae is one of the important commercial crops grown all over the world with leaf as an economical part. Mexico was the origin place of tobacco and the crop is grown mostly in tropical and subtropical climatic regions. Out of roughly 70 known species in Nicotiana genus, only Nicotiana tabacum and Nicotiana rustica are commercially cultivating species. The tobacco is categorized into two types viz., Flue Cured Virginia tobacco (FCV) and non-Flue Cured Virginia tobacco (non-FCV) based on the curing procedure of the leaf. FCV tobacco is having significant commercial importance (Mandanna et al., 1998).

Indian tobacco experts have been showing a slow but increasing trend over the past decade. To improve the export performance of Indian unmanufactured tobacco, change in the structural changes need to be studied to focus on the new markets and to retain the current share of exports to different countries.

In this study the average Indian tobacco exports to a particular region was considered to be a random variable which depends only on its past exports to that region, which can be algebraically denoted as 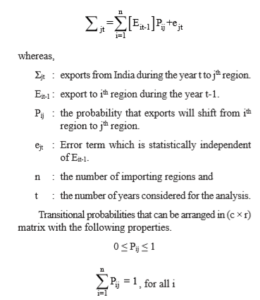 Thus, the expected export shares of each region during the period ‘t’ were obtained by multiplying the exports to those regions in the previous period (t-1) with the transitional probability matrix.

The conventional linear programming techniques were used as this satisfies the properties of transitional probabilities of non-negativity restriction and sum constraints in estimation (Tejaswi et al., 2006). The linear programming formulation is stated as 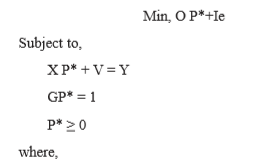 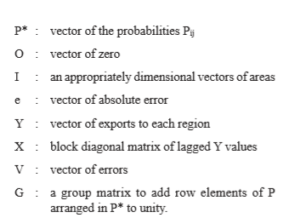 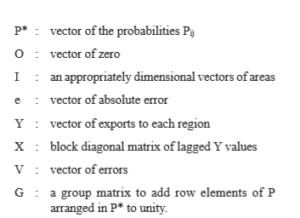 East Europe was a moderately loyal market for Indian unmanufactured tobacco as the region retained around 33.75 per cent of its previous share. East Europe had lost most its share i.e. around 52.97 per cent to Middle East and gained from Middle East and Africa to an extent of around 33.76 per cent and around 19.74 per cent respectively.

North and South America and Australia were less loyal markets as they retained only around 24.28 per cent 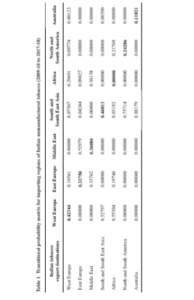 Africa can be considered as dis-loyal market for Indian unmanufactured tobacco during the study period i.e. from 2009-10 to 2017-18 as the region had not retained any of its previous share. The Africa’s share had lost majorly to West Europe (55.30%) followed by South America (21.76%) and East Europe (19.74%). The region had gained a share of around 29.69 per cent from West Europe and 30.15 per cent from Middle East.

Middle East, East Europe, North and South America and Australia were found to be stable importers after South and South East Asia and West Europe with retention of around 36.08 per cent, 33.75 per cent, 24.28 per cent and 11.82 per cent respectively. The Africa region was found to be unstable importer of Indian unmanufactured tobacco as they could not retain any of their previous import share.