V. RAGAMALIKA*, S. RAJESWARI, B. APARNA AND B. RAVINDRA REDDY

Agriculture is continued to play an important role for poverty alleviation in India, even in the era of economic liberalization and globalization. More than 70 percent of India’s population lives in rural areas where the occupation is agriculture. Indian agriculture is characterized by small farm holdings. The average farm size is only 1.57 hectors. Around 93 per cent of farmers have land holdings smaller than 4 ha and they have cultivated nearly 55 percent of the areable land. Crop diversification is intended to give a wider choice in the production of a variety of crops in a given area so as to expand production related activities on various crops and also to lesson risk.

Crop diversification in India and also in Andhra Pradesh is generally viewed as a shift from traditionally grown, less remunerative crops to more remunerative crops. The crop shift also takes place due to government policies and thrust on some crops over a given time, for example creation of the technology mission on oilseeds (TMO) to give thrust on oilseeds production as a national need for the country’s requirement for less dependency on imports. Market infrastructure development and certain other price related supports also induce crop shift often low value to high value commercial crops. Crop diversification was generally practiced in rain fed lands to reduce the risk factor of crop failures due to drought or less rains. Crop substitution and shift are also taking place in the areas with soil problems.

Andhra Pradesh over the decades has witnessed gradual transformation of the agricultural sector. The nature of the transformation itself has undergone change overtime. During 1980s, there was a shift in agriculture from traditional cereal based system towards commercial crops like oil seeds, cotton and sugarcane. By 1990s, even though the crop sector witnessed high volatility due to consecutive droughts and decelerating crop yields, the transformation continued towards high value crops. High value crops performed impressively and rescued the agriculture sector to a great extent. With this background the present study aimed to know the crop shifts in Rayalaseema region of Andhra Pradesh.

For the purpose of the present study four districts in the Rayalaseema region viz., Chittoor, Y.S.R Kadapa, Ananthapuramu and Kurnool were selected. Time series data on area under different crops grown in these districts from the period from 1992-93 to 2016-17 were collected from Directorate of Economics and Statistics, Andhra Pradesh. A transition probability matrix was constructed for four districts using Markov chain analysis described below.

Markov chain analysis is an application of dynamic programming to the solution of a stochastic decision process that can be described by a finite number of states (Lakshmi and Devi, 2012). The Markov process was used to study the shifts in the cropping pattern and thereby gain an understanding about the dynamics of the changes. Markov chain analysis was carried out for a period from 1992-93 to 2016-17. Reddy and Lalith Achoth applied the Markova chain analysis to know the dynamics of the cropping pattern changes in Kerala.

Wit  : represent the probability that state Si occurs on trial t or the proportion observed in trial t in alternative outcome state i of a multinomial population based on a sample of size n, i.e. Pr (Sit).

Pij  : represent the transitional probability which denotes the probability that if for any time t the process is in state Si, it moves on next trial to state Sj, i.e. 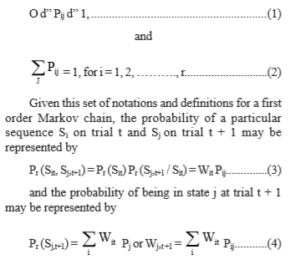 The proportions of area under the crops change from year to year as a result of the factors like weather, technology, price and institutional changes. It is reasonable to assume that the combined influence of these individually systematic forces approximates a stochastic process and the propensity of farmers to move from one crop state to another differs according to the crop state involved. If these assumptions are acceptable, then the process of cropping pattern change may be described in the form of a matrix P of first order transition probabilities. The element of Pij of the matrix indicates the probability a farmer in crop state i in one period will move to crop state j during the following period. The diagonal element Pij measures the probability that the proportion share of ith category of crop will be retained.

Equation (4) can be used as a basis for specifying the statistical model for estimating the transition probabilities. If errors are incorporated in equation (4) to account for the difference between the actual and estimated occurrence of Wj(t+1), the sample observations may be assumed to be generated by the following linear statistical model :

A method to derive parameter estimates when equality or inequality restrictions are present is to make use of Minimum Absolute Deviations (MAD) estimator. If we employ this method in obtaining estimates of the transition probabilities, our problem may be specified as follows: 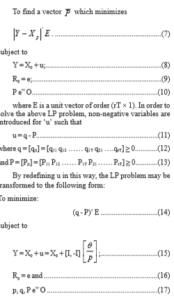 After estimating transition probability matrix (P), proportion of area under different crops can be predicted using the following equation. 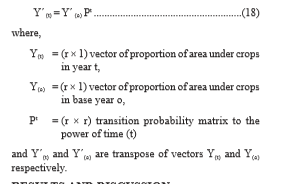 The transition probability matrix presented in Table 1 shows the changes in areas of different crops in Chittoor district. Among all the crops studied, the acreage under other crops retained fairly highest probability to the extent of 0.9520. The other crops in the district include potato, tomato, tamarind, beans, brinjal, mango, ragi, bajra, small millets and coconut. This retention of area was further reinforced by the gain from paddy (0.0791). The transfer probabilities from other crops to redgram, sunflower and chillies were 0.0402, 0.0054 and 0.0022.

A very low degree of retention probability of 0.1064 was observed in paddy. It had a transfer probability of 0.6564 to groundnut, while other crops, chillies and redgram gained to an extent of 0.0791, 0.0123 and 0.0105 respectively from paddy. Even it lost its major share to groundnut; it was benefited by getting share of 0.3107 from groundnut.

The results of Markov chain analysis to find out changes in the direction of different crops in Y.S.R. Kadapa district (Table 2) over the period (1992-93 to 2016-17) revealed that, cotton crop had highest retention probability to the extent of 0.8050 and fairly low transfer probability of 0.1293 to other crops, 0.0474 to paddy and 0.0181 to redgram. The other crops in the district include mango, lemon, papaya and onion. Further cotton has gained a share of 0.2042 from sesamum, 0.0441 from sunflower and 0.0346 from coriander.

The transition probability matrix presented in Table 3 shows the changes in areas of different crops in Ananthapuramu district. Among all the crops studied, the acreage under groundnut retained fairly highest probability to the extent of 0.8737. This retention of area was further reinforced by the gains from sorghum (0.9546), sunflower (0.8753), chillies (0.8186), bengalgram (0.5373) and redgram (0.2195). The transition probabilities from groundnut to paddy, sorghum, bengalgram, sunflower and redgram were 0.0268, 0.0268, 0.0401, 0.0319 and 0.0004 respectively. 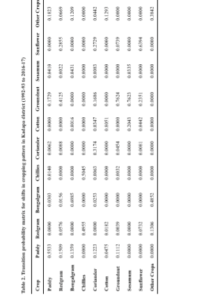 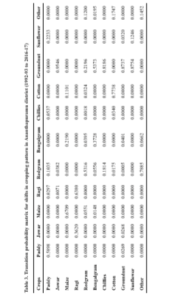 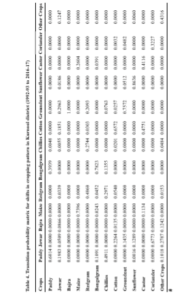 Chillies and sorghum were highly unstable and they did not retain their areas. Both the crops had transfer probabilities of 0.8186 and 0.9546 to groundnut. Chilly crop gained through diversion of paddy, cotton and redgram with respective probabilities of 0.0573, 0.0340 and 0.0018, whereas sorghum gained shares from ragi (0.3620) and from groundnut acreage (0.0268).

The results of Markov chain analysis to find out changes in the direction of different crops in Kurnool district (Table 4) over the period (1992-93 to 2016-17) revealed that, sunflower crop had retention probability to the extent of 0.8635 and fairly low transfer probability of 0.1288 to jowar, 0.0481 to coriander, 0.0121 to greengram and 0.0015 to paddy. The other crops in the district include bhendi, brinjal, tomato, mango, Batavia, crossandra and jasmine. Sunflower has gained a share of 0.0511 from groundnut and 0.0186 from jowar.

As groundnut is the most stable crop in Rayalaseema region of Andhra Pradesh, the Government has to provide good quality of inputs at right time in required quantity. Further developing the market infrastructural facilities along with the credit and crop insurance facilities will uplift the socio economic conditions of the Rayalaseema farmers.