The parasporal crystal toxins produced by Bacillus thuringiensis are the most widely used natural insecticides in pest control in agriculture and vector control of public health. B. thuringiensis was isolated from soil samples of Tirupati region using sodium acetate selection method. The soil samples were buffered with 0.5M sodium acetate followed by heat shock at 80oC and serial diluted up to 10-5 for eliminating non-spore forming bacteria and other microbes in the culture and then grown on LBA medium. After 24 hr of incubation, the colonies which were round, creamish with fried-egg appearance were produced. A total of 71 colonies from 100 soil samples were tested for Gram staining and observed 56 Gram positive bacteria with rod shaped structure. These 56 Gram positive cultures resulted in 42 endospore producing cultures and finally 32 crystal producing B. thuringiensis cultures were identified out of which 16 were bipyramidal, 9 were rhomboidal and 7 were spherical.

Biological control is an important component of integrated pest management (IPM) in which microbial biocontrol plays a key role in the control of insect pests. Over 100 bacteria identified as insect pathogens, Bacillus thuringiensis Berliner (Bt) has got maximum importance as a microbial biocontrol agent (Muhammad et al., 2016).
B. thuringiensis is a Gram positive, rod shaped, facultative aerobic, spore-forming saprophytic soil bacteria which constitutes 95 per cent of all commercial bio-insecticides, due to its high specificity, safety and effectiveness in the control of wide spectrum of human disease vectors and agriculture-pests. Spore-formation enables B. thuringiensis to survive in harsh environments resulting in a ubiquitous distribution (Schünemann et al., 2014). Besides spore formation, insecticidal properties of B. thuringiensis are mainly attributed to the synthesis of insecticidal crystal proteins (ICPs) and vegetative insecticidal proteins (VIP), which are synthesized during sporulation and vegetative growth, respectively. Bravo et al.,1998 reported that, the crystal proteins toxic to lepidopteran insects belongs to the cry1, cry9, and cry2 groups, toxins active against coleopteran insects are cry3, cry7, and cry8 proteins, cry1B and cry1I proteins have dual activity. Among the Vip proteins, Vip1 and Vip2 are effective against Coleoptera and Hemiptera. The third group Vip3 is suitable for Lepidoptera which is having mode of action similar to Cry proteins in terms of proteolytic activation. The mode of action of Vip 4 is still unknown and the target group is also unidentified.
B. thuringiensis strains have been isolated worldwide from many habitats, including soil, aquatic environments, dead insects and their breeding sites, herbivore faeces, stored-products, dust and deciduous and coniferous leaves (Cavado et al., 2001). A typical method of isolation involves heat treatment to select for spores, sometimes with an acetate enrichment step (Travers et al., 1987), antibiotic selection (Yoo et al., 1996) or non selective agar media (Chilcott and Wigley, 1993).

The objective of the present study was to collect and isolate B. thuringiensis from soil samples from diverse regions in and around Tirupati, Chittoor, Andhra Pradesh, India.

The present study was carried out in the Department of Entomology, S.V. Agricultural College, Tirupati.

Surface soil was scraped off to avoid surface contamination and about 10 g of soil sample was taken from a depth of 5–10 cm with sterile spatula and subsequently transferred into sterile plastic bags and brought to the laboratory for further processing. These samples were stored at 4oC until processed for isolation of B. thuringiensis.

Isolation of B. thuringiensis from Soil Samples

Staining and Microscopic observations of strains for identification of B. thuringiensis

After incubation, bacterial colonies were selected based on the typical morphological characteristics of B. thuringiensis, creamish coloured colonies having appearance of fried egg. These selected colonies were then sub-cultured onto new Nutrient Agar plates by repeated four way streaking (Merdan et al., 2010) and incubated at 37oC.

Smears of bacterial cultures were prepared and subjected to Gram staining, endospore staining and crystal staining for identification of B. thuringiensis. Gram staining of bacteria was done by following Hucker’s method as described by Cappuccino and Sherman (1992). Gram positive cells appear violet colour under microscope. Gram positive cultures were streaked on T3 medium for sporulation. After 48 hr of incubation, crystal protein staining was performed according to the protocol given by Sharif and Alaeddinoglu (1988) and they appear as dark blue coloured crystals under microscope. Endospore staining was done by using Schaeffer-Fulton method. Under the microscope, the endospores appear as green and the vegetative cells will appear red or pink (Lalitha, 2012).

Out of 100 soil samples, 71 samples have shown creamy white, flat bacterial colonies with fried egg appearance, of which 17 were from virgin soils, 18 from field crops, 15 from horticultural crops, 4 from fodder crops, 8 from agro-forest crops and 9 from wastelands. These results are comparable with the findings of Frederiksen et al., 2006 and Lalitha, 2012 who reported the frequent occurrence of B. thuringiensis in the natural environment and the possibility of isolating novel strains. Most of these studies proved the ubiquitous nature of B. thuringiensis, which can be found in any type of soil.

Of the 56 Gram positive cultures tested for endospore production, a total of 42 cultures were able to produce endospores out of which 10, 9, 11, 3, 4, 5 from virgin soils, field crops, horticultural crops, fodder crops, wastelands and agro-forest crops, respectively. The Gram 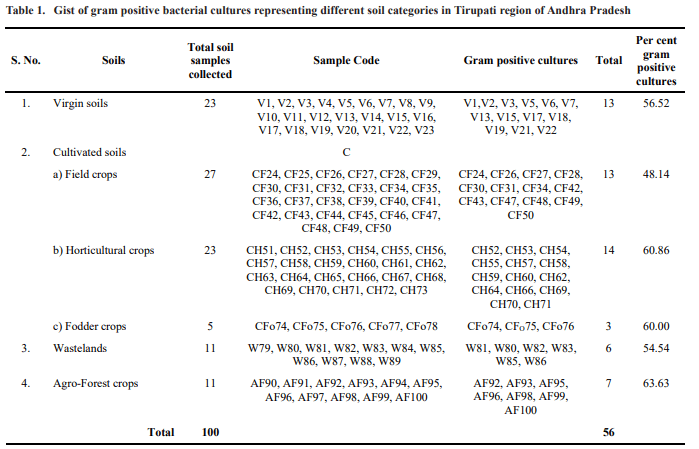 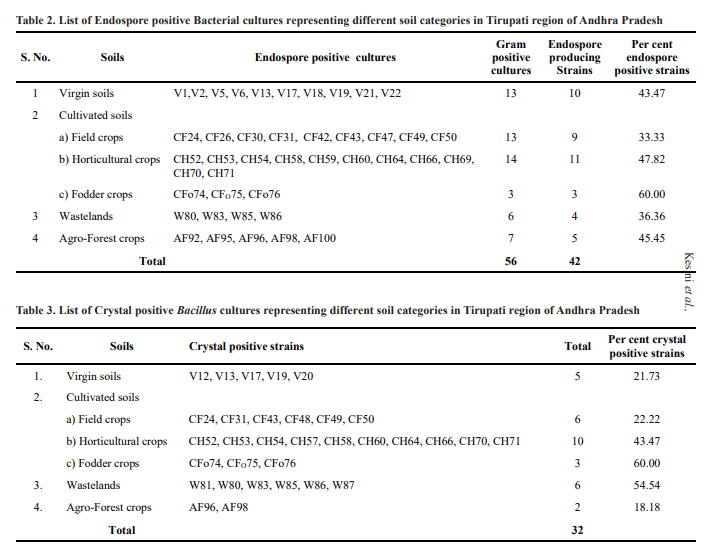 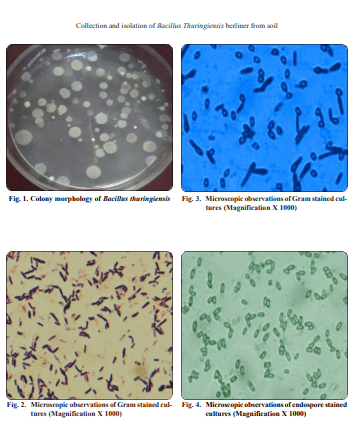 positive samples of fodder crops produced highest per cent endospores (60.00%), compared to 47.82, 45.45,
43.47, 36.36 and 33.33 per cent in horticultural crops, agro-forest crops, virgin soils, wastelands and field crops (Table 2). The endospores were ellipsoidal and lie in the sub terminal position and most of them released freely from the cells while observed under phase contrast microscope.

Among the 32 B. thuringiensis crystal positive strains tested for the presence of parasporal inclusions or crystal proteins, soil samples from fodder crops harboured high frequency of 60.00 per cent crystal positive B. thuringiensis strains (3/5), followed by 54.54 per cent in wastelands (6/11), 43.40 per cent in horticultural crop ecosystems (10/23), 22.22 per cent in field crop ecosystem (6/27), 21.73 per cent in virgin soils (5/23) 18.18 per cent in agro-forest ecosystem (2/11) (Table 3). The variation in B. thuringiensis positive strains from different environments may be due to biotic and abiotic factors viz., micro-organisms in the soil, type of insect fauna associated with the sampling areas besides abiotic factors such as the soil pH, soil texture, nutritional status, soil aeration, temperature and humidity etc. Armengol et al., 2007 characterized 445 strains of B. thuringiensis based on crystal morphology, insecticidal ability, type of cry genes and protein profiling and observed that 60 per cent of strains are with bipyramidal crystals. Reyaz et al., 2017 found 4 types of crystal toxins including bipyramidal (5.88%), spherical plus rod (4.41%), spherical plus bipyramidal (2.94%) and cuboidal (2.94%).

This study demonstrated that soil samples collected from undisturbed soils (virgin soils, wastelands, forest crop soils) harboured more B. thuringiensis than cultivated soils. A future study related to serological characteristics and insecticidal activity of B. thuringiensis isolates would likely to give more definitive results about the biodiversity of B. thuringiensis strains in varied regions in Tirupati.

Chilcott, C.N and Wigley, P.J. 1998. Isolation and toxicity of Bacillus thuringiensis from soil and insect habitats in New Zealand. Journal of invertebrate pathology. 61: 244-247.