Agriculture is the primary source of livelihood up to 58 per cent of India’s population. With increasing population, demand for food and agricultural production is inevitable.

Apart from the essentials like oxygen, water, sunlight, it is the harmones that modulate the growth of individual plant parts and controls various physiological activities. The plant growth regulators are also called as plant growth harmones or phytoharmones which are either synthesized in the laboratory or produced naturally within the plant. Plant growth regulators are of two major groups one that promotes the growth and the other that retards the growth of the plants. The global market of plant growth regulators is driven by declining farming area coupled with increasing demand for organic food. The Humic acid global market is estimated to grow by CAGR of 14 percent by 2026 from 510.9 million USD in 2018. (Anonymous, 2018). Agriculture application being the largest segment with 55 percent market share. (Anonymous, 2022.) The common source of purchasing the plant growth promoters by farmers is through local dealers. Dealers not only sell to farmers but also play important role in the source of information about the products and their distribution function, also influencing the amount and type of plant growth promoters used by farmers. Buying decision is a set of many decisions which may involve a product, brand, quality, dealers, time and price. The objective was set to study the buying behaviour of farmers and constraints faced by them in purchasing plant growth promoters.

For this study Chittoor district was purposively selected as it occupies first place gross area sown in Andhra Prades. Two mandals of Chittoor district were selected. Three villages from each mandal were identified and from each village 10 farmers were selected randomly, making a sample size of 60 farmers. A well framed schedule was developed based on objectives. Primary data was collected using personal interview method. The data was collected for the month of August and the year 2021. Secondary data required was collected from authenticated sources and other e-resources. Descriptive statistics and appropriate statistical tools like percentage analysis, Garrett’s ranking, Likert’s scaling were employed in the study.

For farmers major source of information about plant growth promoters were dealers. Most of the farmers prefer credit sales, if credit sales were not available, most of the farmers had switched to dealers those providing credit Buying behaviour to farmers in purchasing plant growth promoters (70.00%) and if required brand is not available majority of the farmers were shifting to other brand (82.00%) and only (12.00%) of them wait for the required brand (Yeshwanth et al., 2019). 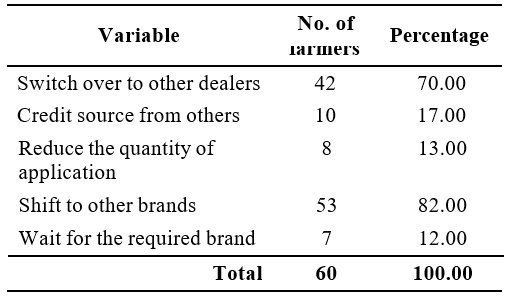 Table 2 revealed that regarding the source of information was through dealers as farmers were not much aware of plant growth promoters, relying on dealers followed by progressive farmers, department of agriculture, company representatives, communication media, kissan call centers and cooperative societies were ranked least as there were no such provisions for farmers (Gaikwad and Jirali, 2016).

Table 4 revealed that the major constraint faced by the sample farmers was high price of plant growth promoters followed by high interest on credit as most of the farmers in the study area were purchasing plant growth promoters on credit basis and dealers making it as an advantage, they imposing high price for the borrowed. The other constraints were in the order offer of adulteration, poor quality of the products, no discount during bulk purchases which was not forth coming, lack of credit availability, and non-availability of preferred brands (Dharmaraj et al., 2013 and Jain et al., 2017).

Table 4. Constraints during the purchase of plant growth promoters from the private dealers

Table 5. Awareness of farmers on usage of plant growth promoters