Brand Loyalty of Urban and Rural Consumers Towards Branded Edible Oils in Chittoor District of A.p.

The main objective of the study is to know the consumers brand loyalty towards branded edible oils. The study was based on a sample of 60 rural and 60 urban consumers. The findings of the study revealed that majority of the urban consumers of branded edible oils were brand loyal compared to the rural consumers. The main reason for switching to other brand by the urban respondents was that the competitor’s brand was very good in quality, whereas rural consumers were shifting to another brand due to the price of the current brand is very high. Majority of the respondents were not aware about the various edible oil brands available in the market.

Edible oils compose a principal component of food expenditure in the Indian households. India is the third largest consumer of edible oils after China and the EU countries. In India people in different regions uses different oils based on the taste and availability of local oils. People in northern and central part of India mostly prefer soya bean oil due to local availability of soya bean. In the east and north east part of India people mostly prefer mustard oil since of its use in the local cuisine. In southern part of India Groundnut oil, sunflower oil, coconut oils are widely consumed apart from this palm oil is also mostly used due to easy availability from south east Asia.

Increasing disposable income and rising consumer awareness about healthy lifestyle boosted the consumption of packaged edible oil in the country. Strong marketing activities of leading edible oil brands, changing buying behaviour of consumers, establishment of modern grocery retailers like hypermarkets and supermarkets, shifted the consumption pattern of edible oils towards branded oils. Brand loyalty places an important role to get more revenue by the edible oil companies. Brand loyalty can be defined as the extent of consumer faithfulness towards a specific brand and this faithfulness is expressed through repeat purchases and other positive behavior’s such as word of mouth advocacy, irrespective of the marketing pressures generated by the other competing brands (Kotler & Keller, 2006). Singh and Singh (1981) found that consumers had single or multi brand loyalty based on the nature of the Product, like necessaries or luxuries. Padmanaban and Sankaranarayanan (1999) revealed that the price of the preferred brand, efficiency of the preferred brand and influence of advertisement significantly influenced the brand loyalty. Usha (2007) analysed the buying behaviour of consumers for instant food products in Kolar district of Karnataka state and found that high price and poor taste were the reasons for not purchasing a particular brand while best quality, retailers influence, and availability were considered for preferring a particular brand of product by consumers. Kulkarni and Srivastava (2018) disclosed that sales promotion, purchase intention, quality and price have a positive correlation with brand loyalty at varying degrees; nevertheless, there is a fairly good amount of impact of purchase intention on brand loyalty (29.50%), as compared to other variables viz., price (27.8%), sales promotion (18.2%) and quality (11.5%). With this background the present study was carried out with an objective of analyzing the brand loyalty of urban and rural consumers towards branded edible oils in Chittoor district of Andhra Pradesh.

Chittoor district was purposively selected for the study as it is one of the urbanized districts of the state of Andhra Pradesh. From Chittoor district, based on highest urban population areas viz., Tirupati, Chittoor and Madanapalli were selected. Based on the same criteria i.e., two highest rural population areas corresponding to each urban area were selected thus the rural areas selected for the study were Chellur and Ramireddypalle from Tirupati, Gundlapalle and Aragonda from Chittoor and Bairupalle and Gollapalle from Madanapalli. A sample of 20 consumers from each urban area was selected randomly and from each rural area 10 consumers were selected randomly. Thus, a total of 60 urban consumers and 60 rural consumers constituted the sample of the survey. Simple percentage analysis was employed to examine the brand loyalty of urban and rural consumers towards the branded edible oils.

b) Respondents preference towards different brands of peanut oil:

a) Brand loyalty of respondents towards branded edible oils: 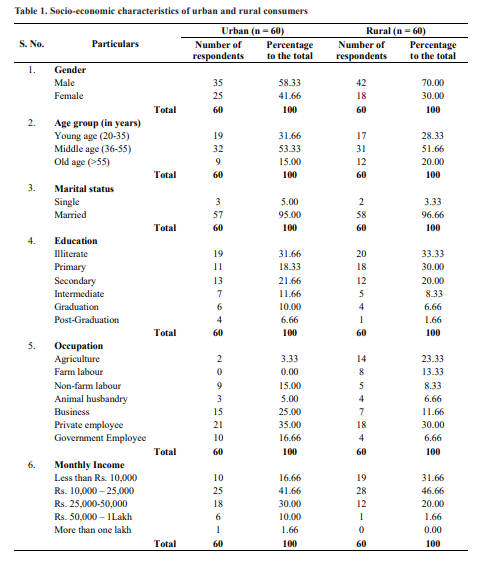 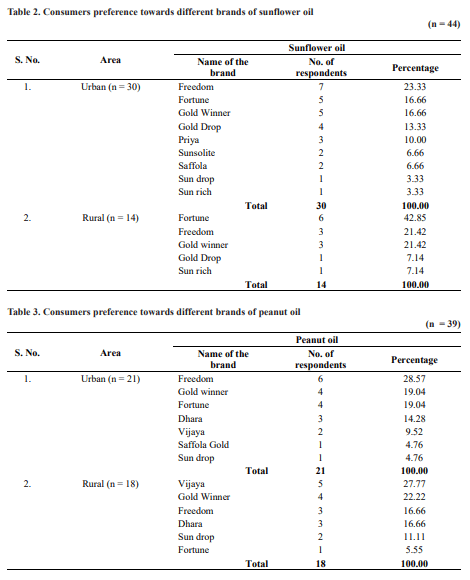 b) Consumer Behaviour Towards Brand loyalty

c)Frequency of switching to other brands of edible oil

d)Reasons for switching to other brands of edible oil

e)Consumer importance about the labelling on the edible oil packet 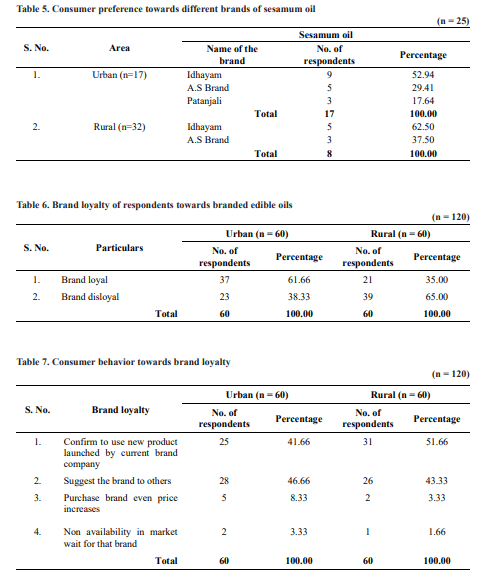 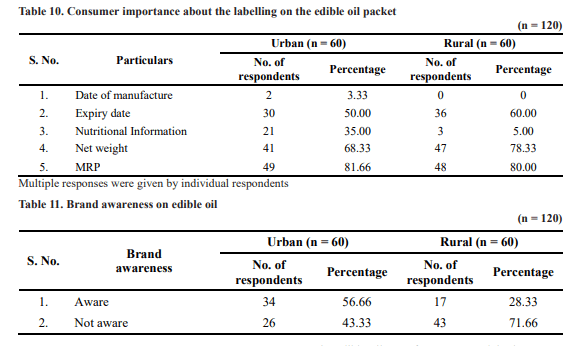 and rural areas were look about the labelling on the edible oil packets and they were giving more importance to the labelling aspects before buying oil.

1.The brand loyalty among the respondents were less. So, the edible oil business companies have to follow good promotional strategies like giving discounts or special offers and also, should provide consistent quality. If consumers feel value and are getting a fair deal from their loyalty, then they have no chance to shift to other brand.
2.The rural respondents were preferring the brands which are mostly available in the retail outlets. So, those companies which are involved in the edible oil business should concentrate on the availability of their product in each and every store.
3.Most of the respondents were not aware about the various edible oil brands available in the market. So, the edible oil manufacturers are advised to create awareness through many promotional and advertising techniques.