Assessment of Feed and Fodder Availability and Requirement in Andhra Pradesh

The present study aimed to estimate the feed and fodder demand for the existing livestock population and supply in Andhra Pradesh. For the study the secondary data was collected from the different sources. The livestock population was converted into Ruminant Livestock Units (RLU) based on the species, age and sex. Ruminant Livestock Units (RLU) were considered to have a body weight of 350 kg and a dry matter intake of 2 per cent of their body weight. The total RLU in the state is 9.24 million, requiring 23.61 million tonnes of feed and fodder on dry matter basis. Availability of dry fodder and concentrates were estimated using appropriate conversion ratios to different crop production while green fodder was estimated by applying per hectare yield to different fodder sources The total annual availability of feed and fodder in the state was estimated to be 33.13 million tonnes against the requirement of 23.61 million tonnes and thereby excess of around 40.35 per cent per annum. The availability of feed and fodder was excess in 9 districts except for the Visakhapatnam, Prakasam, Kadapa and Anantapuram districts of the state. Average dry matter availability in the state was 9.82 kg/RLU/day against the requirement (7 kg). Creation of fodder banks and transport fodder to the deficit areas of the country are the policies to be developed and need priority attention to solve the problem of fodder in deficit areas.

India is primarily an agricultural country, with about three-quarters of the population relying on agriculture, livestock, and related industries for a living. Rural areas are home to over 70 per cent of the country’s population. Furthermore, rural areas are home to almost 80 per cent of the country’s poor (40.7 million). They even provide rural poor households who seem to be landless and small landowners both financial help and food. Agriculture and cattle have long been intertwined in India, providing income for the rural population even during years of drought or inadequate rainfall.

Livestock is a major component of the Indian economy. A total of 30.5 million individuals makes their living from cattle. Livestock rearing is a fundamental section of Indian agriculture supporting the livelihood of nearly two-thirds of the Indian rural population (Karthik et al., 2021). In addition to genetics, the availability of feed resources is crucial for maximizing cattle and poultry output (Ayele et al., 2021). The growth rate of livestock decreased from 3.82 per cent to 2.58 per cent which is a worrisome sign considering that the share of livestock in the agriculture sector is 60.56 per cent and it contributes 11.69 per cent to GDP (Source: Agriculture in Budget 2020-2021, India). According to the Economic Survey 2020-2021, India, agriculture’s contribution to the gross domestic product (GDP) has risen to about 20 percent for the first time in the past 17 years, making it the only area of the GDP’s performance that is expected to improve in 2020–21. Cattle that were fed crop wastes or straw from grains such as rice, wheat, maize, jowar, and bajra, as well as straw or a bhusa supplemented with green fodder, and are currently grazing on pasture and gauche (grazing) fields. Cattle are fed with different varieties of feeds, including dry fodder, green fodder, and concentrates (Oil cakes, Grains, Bran, and Chuni). The availability of fodder from cultivable land, forests, pastures, and grazing lands has an impact on livestock development and growth in the future.

Fodder is a substantial component of animal feed, accounting for two-thirds of the total demand. It is critical to boost fodder output by expanding under cultivation to 12 per cent of total cultivable land and using high yielding fodder crop varieties. Because of the ever-increasing human population pressure, arable land is mostly used for food and cash crops, therefore there is limited likelihood of having excellent quality arable land accessible for fodder production, and until milk production is economically viable for farmers in comparison to other crops.

The unavoidable factors such as shift to commercial crops, shrinking of common property resources and shift towards the cultivation of commercial crops were the reasons for depleting the feed and fodder resources. Enhancing the individual productivity in a huge population of low-producing animals is one of the biggest challenges of Indian livestock sector (Thornton, 2010). Quantification of existing feed resources is necessary for the development of efficient feeding strategies and for the judicious utilization of available feed resources (Ranjhan, 1994).

The study is entirely based on secondary data and it was conducted in Andhra Pradesh to assess the feed and fodder demand to sustain the existing livestock population and supply in the region and the state has a total of 13 districts (Figure 1). 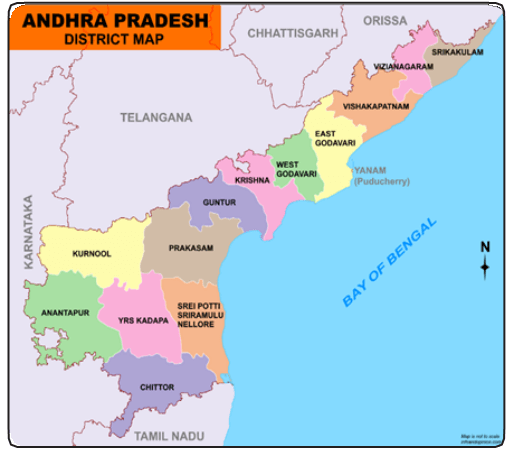 Figure 1. Locale of the study

District-wise data regarding land use, production under different crops, and livestock population were collected from various published sources like Statistical Abstracts of Andhra Pradesh and Seasonal crop reports.

Livestock population in the state was converted into standard ruminant livestock units according to the species, age, and sex-wise (Table 1) and livestock census 2019 data was collected from (GOI, Department of Animal Husbandry, Dairying and Fisheries, Ministry of Agriculture and State Department Animal husbandry, Andhra Pradesh). 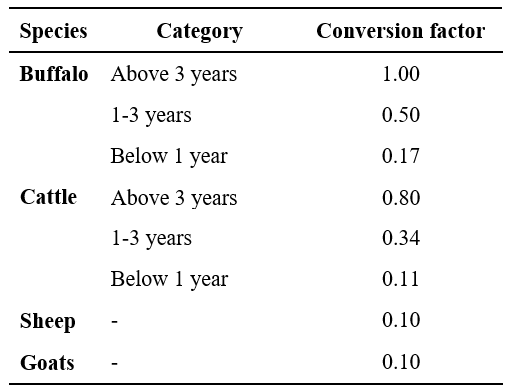 District wise requirement for ruminants were calculated based on the ruminant livestock units of 350 kg body weight by assuming 2 per cent dry matter intake per day for every ruminant cattle unit (7 kg dry matter for 350 kg body weight (Ramachandra et al., (2007). The dry fodder availability from different crops was assessed from production data for the year 2020-21. The green fodder availability was also estimated using production potential per unit hectare from land classification data.

The land utilization pattern data were classified as Gross Cropped Area (GCA), forest area, cultivable wasteland, permanent pastures, other fallows, area under miscellaneous trees and crops from which green fodder is available for livestock feeding. The availability of green fodder from the gross cropped area (GCA) on the assumption that 4 per cent of the GCA is under folder cultivation with an average yield of 40 tonnes per hectare per year. It was assumed that only 50 per cent of the forest area is available for further production and the average fodder yield is around 3 tonnes per hectare per year. The estimation of green fodder availability is made by using conversion factors is presented in Table 3. 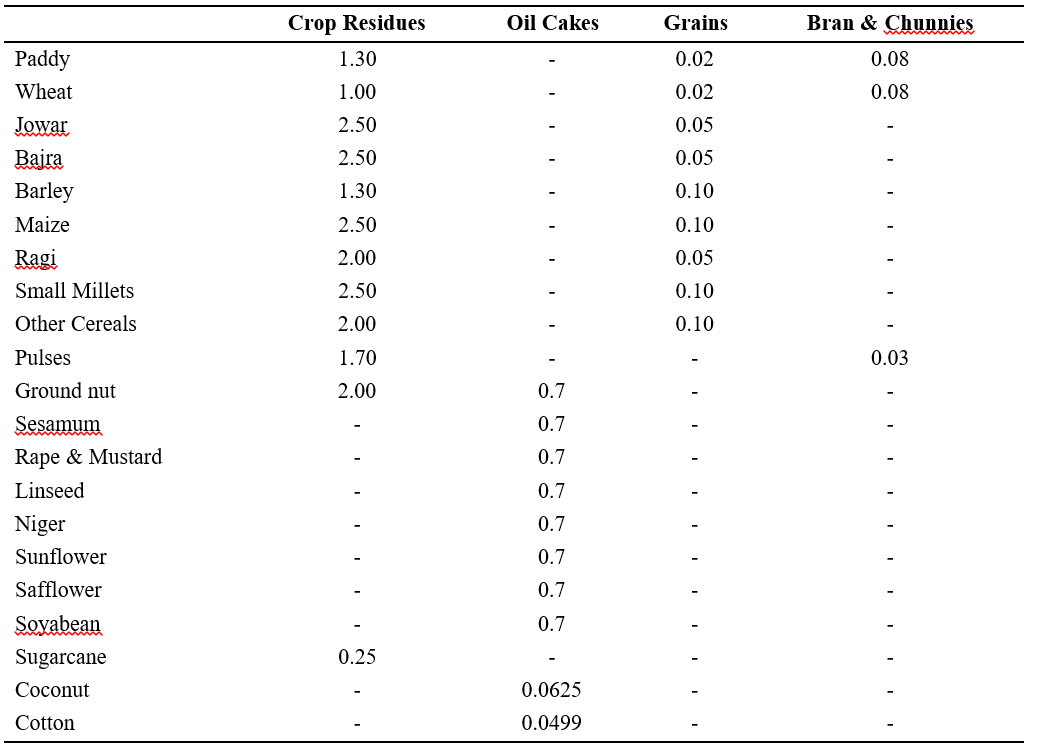 The potential dry matter availability of dry fodder in all the districts of Andhra Pradesh was presented in Table 4. The dry matter availability from dry fodder was estimated from the crop residues (coarse straw, fine straw, and leguminous straw) and concentrates. The total dry matter estimated from the crop residues was 24.46 million tonnes (Table 4). Within the crop residues, the fine straw consisting of paddy and wheat accounted for the major share (>65%) while coarse straw (27.68%) from maize, jowar, bajra, ragi, minor millets, and sugarcane tops and leguminous straw from pulses and groundnut accounted for a minor share (13.8%). Among different districts, West Godavari contributed the highest percentage followed by Guntur, Krishna, East Godavari, shared more than half of the total dry fodder production of the state.

The total green fodder production in the state on a dry matter basis was estimated at 5.32 million tones (Table 5). Among different districts, Kurnool produced 11.04 per cent, followed by Anantapuram (10.90%), Prakasam (10.47%), East Godavari (9.08%), and Chittoor (8.82%) of green fodder of the state. These five districts produced more than 45.00 per cent of the green fodder in the state. 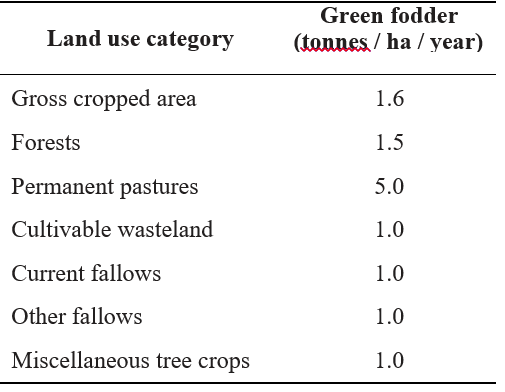 Feed and fodder demand and supply:

On the dry matter basis, the annual demand for feed and fodders based on RLU and per unit intake was estimated to be 23.61 million tonnes (Table 8). There is wide inter-district variability in demand for feed due to the difference in the number of RLU. The highest dry matter requirement was in the Anantapuram district followed by Prakasam, Kurnool, Kadapa, and Guntur as these districts have a higher population of animals. The supply of feed and fodders on a dry matter basis was a tune of 33.13 million tonnes and it was excess up to a tune of 9.52 million tonnes (40.35%) against the requirement of the state. The contribution of dry fodder towards overall dry matter was 73.82 per cent and green fodder

and Kurnool, as these districts have higher production and more area for crops in comparison to other districts of the state. It was found that the four districts such as Visakhapatnam (-23.58%), Prakasam (-25.80%), Kadapa

For further growth in the Animal husbandry sector in Andhra Pradesh, it is essential that the policymakers, planners, and researchers have to focus their attention on the following aspects while formulating future policies.

residues to fulfill the requirement of dry fodder.

Looking into the overall availability of livestock feed resources in the state, it has shown that presently there are sufficient feed resources available to meet the requirement of our livestock at least in quantitative terms. Nutritionally poor crop residues would continue to form the bulk of livestock feed for time to come and there is a need for efficient utilization of the existing 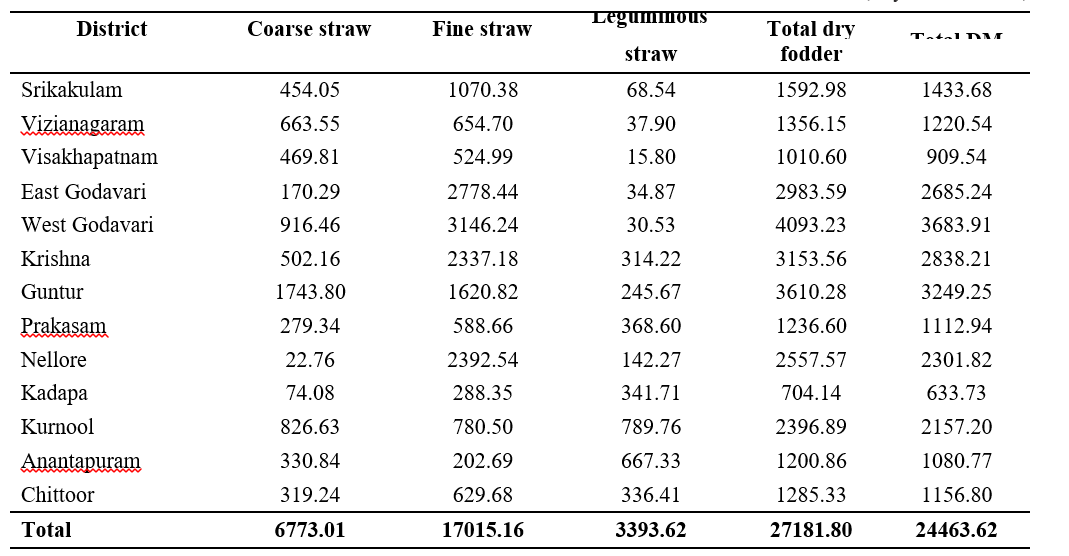 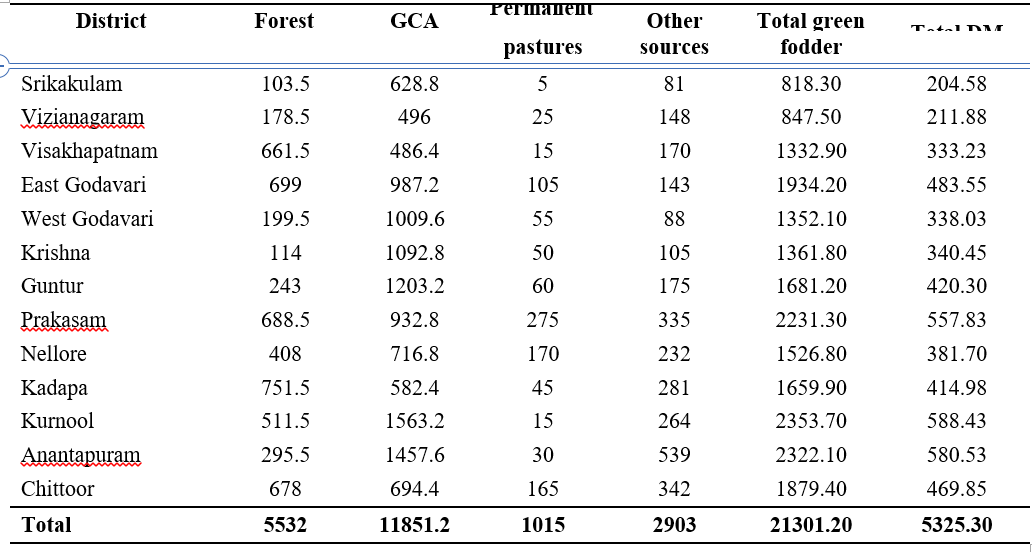 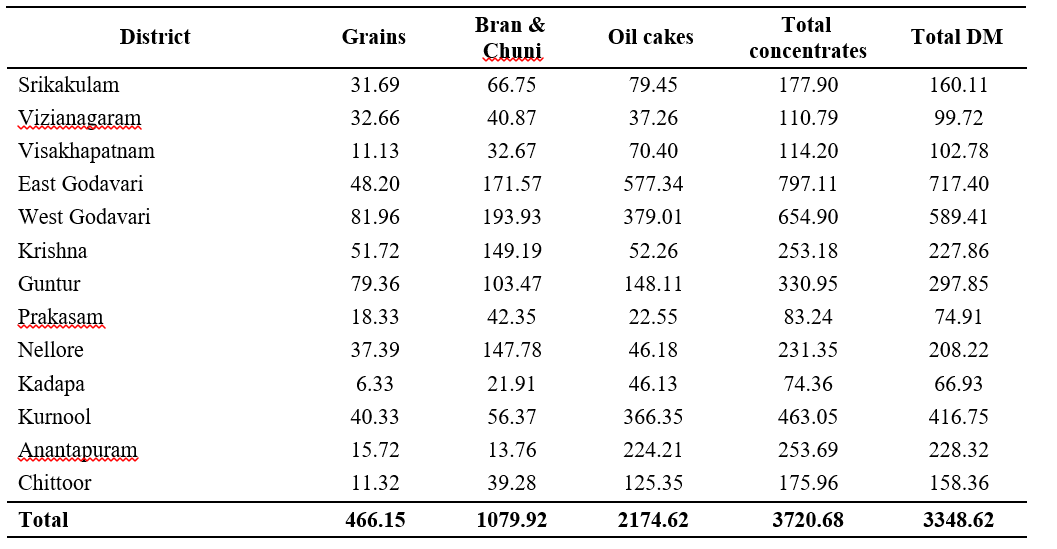 Table 7. Supply, demand, and gap in livestock feed and fodder among different districts of Andhra Pradesh 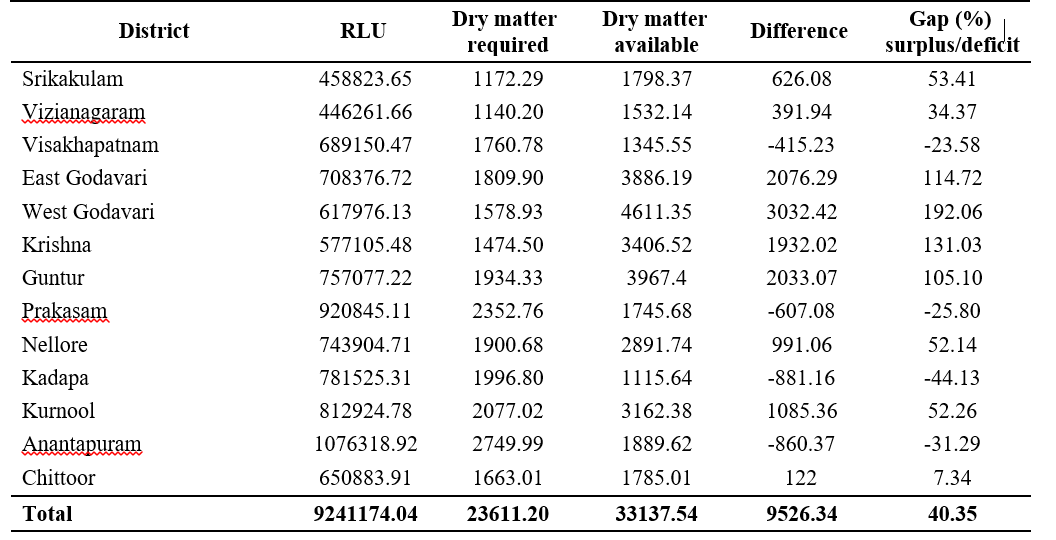 feed resources and to enhance the nutritive value of crop residues through suitable technologies. From the overall situation, it was suggested that the scope of increasing the contribution of feed resources is possible by bringing about changes in the cropping pattern. Crop residues that form the major component can be treated suitably to enhance their nutritional value.

Ranjhan, S.K. 1994. Consultant’s Report on Availability and Requirement of Feed and Fodder for Livestock and Poultry. Department of Animal Husbandry and Dairying. Ministry of Agriculture, Government of India, New Delhi, India. 101-108.